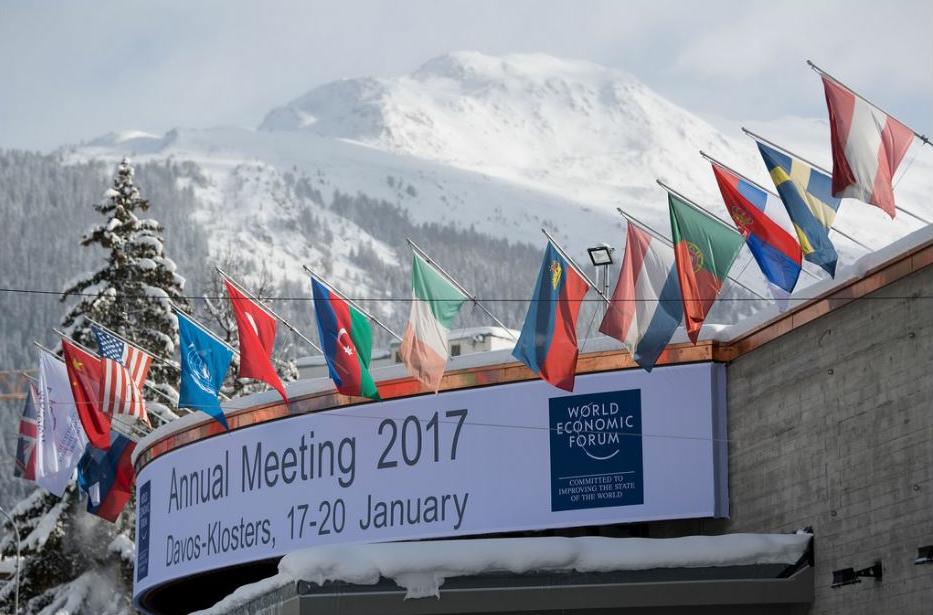 Snow on the peaks above Davos, Switzerland where just two weeks ago there was little snow. (Photo by Valeriano Di Domenico courtesy World Economic Forum) Posted for media use on Flickr

DAVOS, Switzerland, January 17, 2017 (Maximpact.com News) – World Economic Forum Founder and Executive Chairman Klaus Schwab welcomed participants to the 47th Annual Meeting today with the thought that despite the “disruptive economic and political models,” now underway, the meeting is a way to construct a positive vision for the future.

“Sometimes it seems that the world is overwhelmed by pessimism and cynicism,” said Schwab. “But we have to look in a confident way into the future.”

Convening under the theme Responsive and Responsible Leadership, more than 3,000 participants from nearly 100 countries are taking part in over 400 sessions.

The meeting is focusing on critical leadership challenges for 2017 – strengthening global collaboration, revitalizing economic growth, reforming capitalism, preparing for the Fourth Industrial Revolution and restoring a sense of shared identity.

“Responsive means that we listen to and interact with those who have entrusted us with leadership,” Schwab said, emphasizing  values and ethics. “It is always important to prioritize the public social good over our own interests. We must emphasize humanization over robotization.“

Networked sensors, machine to machine communications, and data analytics are just a few of the trends driving a global transformation of today’s cities into the smart cities of the future, Johnson Controls chairman and CEO Alex Molinaroli informed the participants today in Davos.

Around the world, governments are investing in innovative technologies and private-sector solutions to make their cities safer, smarter and more sustainable, he blogged at the annual event.

Yet, Molinaroli calls networked sensors a “foundational component of smart cities,” explaining that the technology exists today to “mimic all five of the human senses plus many additional ones” and use that data in computerized monitoring and management systems.

He points to one growing concern for highly interconnected systems, such as the electric power grid – the risk of cybersecurity breaches.

“While individuals have always been at financial and privacy risk from their use of the Internet, interconnected devices and systems communicating and operating autonomously over networks raise significant safety and security concerns,” said Molinaroli. “The cybersecurity of critical infrastructure and the IoT [Internet of Things] is currently being addressed by a number of government bodies and business alliances.“

Improving efficiency and resilience are two of the most important drivers of smart city investment, he said.

In 2016, Johnson Controls completed its 10th Energy Efficiency Indicator survey of more than 1,200 organizations with commercial, institutional and industrial facilities in Brazil, China, Germany, India and the United States. Of those polled, 72 percent said they were planning to increase energy efficiency and renewable energy investments in 2017.

From cities to forests, this year’s World Economic Forum covers a lot of ground.

Florian Reber, manager, Tropical Forest Alliance 2020, a global public-private partnership to reduce the deforestation associated with harvesting palm oil, soy, beef, and paper and pulp, told the Forum that, “Globally, the link between climate change, forests, land use and economic development is one of the most urgent challenges to solve if we are to avoid costly and irreversible impacts of climate change.“

Climate change has already come to Davos, Reber points out. Switzerland is experiencing record low snow levels after the driest December since recordkeeping began in 1864.

“The now snowy streets and frosty temperatures in Davos certainly meet the weather expectations of those participants who have travelled to the Forum’s Annual Meeting,” Reber said. “Yet, had they come to the highest town of the Alps just two weeks earlier, they would have experienced a very different backdrop: no snow at all up until high altitudes with only thin slopes made with artificially produced snow.“

“In a normal year, the natural seasonal hazard would be avalanches,” he said. “This year, not far away from Davos in the southern parts of Graubünden, some of the biggest forest fires in the recent history of Switzerland happened between Christmas and early January. The now missing forest will increase the exposure of villages to future avalanche and rock-fall risk.”

President Xi Jinping spoke at the opening plenary this morning, offering Chinese remedies for the world’s economic ailments. It is the first time a top Chinese leader has attended the event.

The Chinese economy is experiencing “unprecedented and profound changes,” Xi said. He spoke of “innovative, coordinated, green, open and shared” development that offers solutions for China’s current economic problems and indicates a direction for its long-term development.

Xi said that efforts to promote deeper overall reforms, the simplifying of administrative procedures and the delegating of central government power to lower levels of government, along with innovation-driven development, the rule of law, and the fight against corruption, will carry the world’s most populous country into the future.

Big business rules, according to the McKinsey Global Institute.

Fewer than 10 percent of the world’s public companies account for 80 percent of all profits. Firms with more than US$1 billion in annual revenue account for nearly 60 percent of total global revenues and 65 percent of market capitalization. “The quest for size is producing a global bull market in mergers and acquisitions,” the McKinsey data shows.

One session coming up later today aims to explore what operating at this gigantic scale means for competition, collaboration and innovation.

But Sorrell also gave an encouraging nod to small business, saying, “Leveraging the benefits of scale and size are crucial, but small businesses create jobs.“

Ruth Porat, CFO of Google parent company Alphabet, believes that progress results when people take risks and push the frontiers. “Success is just as much about what you do, as what you stop doing,” she declared. “Competition is fierce, and you need to remain focused on that.“

Brian Moynihan, CEO of the Bank of America, says inclusiveness and sustainability are important as the global economy grows.

“We have to grow, no excuse, but you have to do it the right way,” Moynihan said. “The growth that has to take place has to focus on all participants, it has to include everybody, it has to deal with the ups and downs of market-based forces.”

Growth has to avoid excessive risk and be environmentally sustainable, he said, as well as being “sustainable in building safety nets around the world to make sure all citizens are dealt with fairly.“

The World Economic Forum continues through January 20 at Davos.