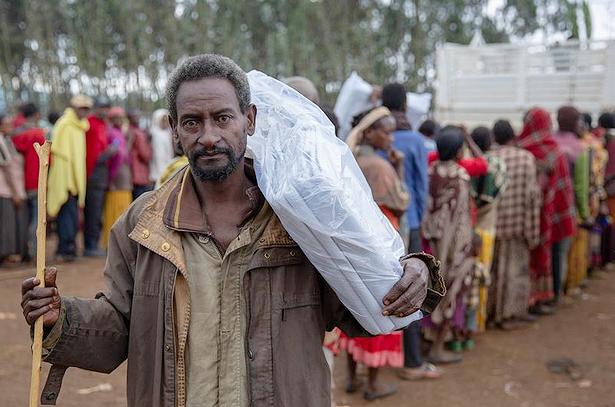 GENEVA, Switzerland, August 1, 2019 (Maximpact.com News) – Migration and climate have always been connected throughout human history, but today the impacts of the human-made climate crisis are likely to extensively change the patterns of human settlement says Dina Ionesco, head of the Migration, Environment and Climate Change Division at the UN International Organization for Migration (IOM), which investigates the links between migration, the environment and climate.

She warns that we are now living in an era where catastrophic climate-related events are linked to human activity, and this is likely to have a major impact on the ways in which we decide to migrate and settle.

“The Atlas of Environmental Migration which gives examples dating as far back as 45,000 years ago, shows that environmental changes and natural disasters have played a role in how the population is distributed on our planet throughout history,” Ionesco said.

“However, it is highly likely that undesirable environmental changes directly created by, or amplified by, climate change, will extensively change the patterns of human settlement. Future degradation of land used for agriculture and farming, the disruption of fragile ecosystems and the depletion of precious natural resources like fresh water will directly impact people’s lives and homes,” she warned.

There is no international legal definition of climate refugee, but climate refugees are considered those who have had to flee their homes due to environmental factors that can be at least partly attributed to climate change, such as drought, extreme weather conditions and natural disasters.

According to the Internal Displacement Monitoring Centre, 17.2 million people had to leave their homes last year, because of disasters that negatively affected their lives.

Slow changes in the environment, such as ocean acidification, desertification and coastal erosion, are directly impacting people’s livelihoods and their capacity to survive in their places of origin.

As Ionesco explains, there is a strong possibility that more people will migrate in search of better opportunities, as living conditions get worse in their places of origin.

“There are predictions for the 21st century indicating that even more people will have to move as a result of these adverse climate impacts,” she said. “The Intergovernmental Panel on Climate Change (IPCC), the main UN authority on climate science, has repeatedly said that the changes brought on by the climate crisis will influence migration patterns. The World Bank has put forward projections for internal climate migration amounting to 143 million people by 2050 in three regions of the world, if no climate action is taken.”

“However, our level of awareness and understanding of how environmental factors affect migration, and how they also interact with other migration drivers such as demographic, political and economic conditions, has also changed,” said Ionesco. “With enhanced knowledge, there is more incentive to act urgently, be prepared and respond.” 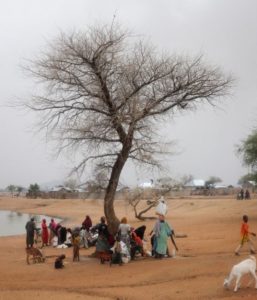 Internally displaced people in Pulka, Nigeria enjoy a brief but much needed spell of rain at the end of the harmatan season when sand storms become more frequent as the rainy season comes in. July 11, 2018 (Photo by Alfred Caballero / IOM) Posted for media use.

The Global Compact for Migration: a Roadmap for Governments

In the past decade, there has been a growing political awareness of the issues around environmental migration, and increasing acceptance that this is a global challenge.

In the Maradi region of Niger, for example, Chloe Sydney of the Internal Displacement Monitoring Centre reports, “Rains are delayed this year, and planting around the village of Isawane has only just started. Harvest isn’t expected until late September and, in the meantime, households are hungry.”

The mayor said, “There’s migration all the time but it increases during periods of drought. When you see that what you have harvested isn’t sufficient to feed your family, able-bodied household members are forced to leave. You can’t just cross your arms and wait to die.”

“This year we haven’t seen much rain. One 30mm rain, one 15mm rain, one 14mm, and one 25mm rain the day before yesterday,” explains a staffer from the mayor’s office. “There have been changes in the climate. We used to plant in early June but now people are only just planting. In the past we had four months of rains, now we have barely two months.”

As a result, many governments have signed up to landmark agreements, such as the Paris Climate Change Agreement, the Sendai Framework for Disaster Risk Reduction and the Global Compact for Migration, which, says Ionesco, marks a clear way forward for governments to address the linked issues of climate and migration.

“The Compact contains many references to environmental migration including a whole section on measures to address environmental and climate challenges: it is the first time that a comprehensive vision has been laid out, showing how states can handle – now and in the future – the impacts of climate change, disasters and environmental degradation on international migration,” Ionesco said.

“Our analysis of the Compact highlights the priorities of states, when it comes to addressing environmental migration. Their primary concern is to “minimize the adverse drivers and structural factors that compel people to leave their country of origin,” in particular the “natural disasters, the adverse effects of climate change, and environmental degradation,” she said.

“In other words, the main priority is to find solutions that allow people to stay in their homes and give them the means to adapt to changing environmental conditions. This approach aims to avoid instances of desperate migration and its associated tragedies.”

“However, where climate change impacts are too intense, another priority put forward in the Compact is to “enhance availability and flexibility of pathways for regular migration,” Ionesco pointed out.

“A last resort measure is to conduct planned relocations of population. This means organizing the relocation of entire villages and communities away from areas bearing the brunt of climate change impacts.”

“Humanitarian assistance and protection for those on the move already, are also tools states can use. Finally, states highlight that relevant data and knowledge are key to guide the decision-making process. Without knowing more and analyzing better, policies run the risk of missing their targets and fade into irrelevance.”

A range of solutions to a complex problem

Responding to the challenges of environmental migration in a way that benefits both countries and communities, including migrants and refugees, is a complex process, said Ionesco, involving many different actors.

Solutions can range from tweaking migration practices, such as visa regimes, to developing human rights-based protection measures. Most importantly, solutions involve a coordinated approach from national governments, bringing together experts from different walks of life:

“There is no one single solution to respond to the challenge of environmental migration, but there are many solutions that tackle different aspects of this complex equation,” Ionesco explained. “Nothing meaningful can ever be achieved without the strong involvement of civil society actors and the communities themselves who very often know what is best for them and their ways of life.”

“I also think that we need to stop discourses that focus only on migrants as victims of tragedy,” Ionesco said. “The bigger picture is certainly bleak at times, but we need to remember that migrants demonstrate every day their resilience and capacity to survive and thrive in difficult situations.”

Professor Jeffrey Sachs is a world-renowned professor of economics, leader in sustainable development, senior UN advisor, bestselling author, syndicated columnist and former director of the Earth Institute at Columbia University. He is the co-recipient of the 2015 Blue Planet Prize for environmental leadership, and has twice been named among Time Magazine’s 100 most influential world leaders.

“Modern humans, born into one climate era, called the Holocene, have crossed the border into another, the Anthropocene,” wrote Sachs in a 2018 opinion column. “But instead of a Moses guiding humanity in this new and dangerous wilderness, a gang of science deniers and polluters currently misguides humanity to ever-greater danger. We are all climate refugees now and must chart a path to safety.”

Featured Images: The poor, and frequently marginalized, sections of the population in developing countries are those who are first and foremost suffering the consequences of climate change, says Dina Ionesco, head of the Migration, Environment and Climate Change Division at the UN International Organization for Migration. April 2017, Munich, Germany (Photo courtesy Munich Re Foundation) Posted for media use.