WEST LAFAYETTE, Indiana, January 12, 2016 (ENS) – American and Swiss researchers are proposing a new integrated “hydricity” concept – the synergistic coproduction of solar thermal power and hydrogen. The cycle generates electricity from the sun and also produces and stores hydrogen from superheated water for round-the-clock power generation whether the sun is shining or not.

The scientists view this proposal as one route to a sustainable economy with abundant electricity generated 24/7 without emitting planet-warming greenhouse gases.

The hydricity proposal is currently at the stage of a simulated computer model, with the researchers moving in the direction of lab experiments.

Once real-world tests begin, hydricity would use specially-designed solar concentrators to focus sunlight.

This can “superheat” water, heating it far beyond its boiling point to produce high-temperature steam. The steam can run turbines to generate electricity and also can be used to operate solar reactors that split water into hydrogen and oxygen.

The hydrogen thus produced can then be stored to superheat water to run the steam turbines overnight when the solar cells aren’t active, generating more electricity.

Or it could be used for other applications, such as fuel for fuel cell cars.

When the proposed integrated process is operated in a standalone power production mode, the resulting solar water power cycle can generate electricity with unprecedented efficiencies of 40 to 46 percent.

When sunlight is unavailable, the researchers envision that the stored hydrogen would be used in a turbine-based hydrogen water power (H2WP) cycle with the calculated hydrogen-to-electricity efficiency of 65-70 percent, a figure comparable to fuel cell efficiencies. 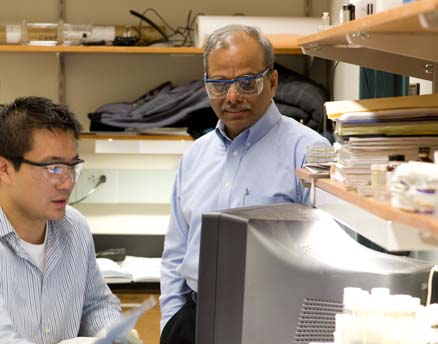 Agrawal is a co-author of the new research paper, “Hydricity: A Sunshine Route to Sustainability,” which was published in December in the journal “Proceedings of the National Academy of Sciences.” (PNAS)

“Traditionally electricity production and hydrogen production have been studied in isolation,” said Agrawal, “and what we have done is synergistically integrate these processes while also improving them.”

“The concept provides an exciting opportunity to envision and create a sustainable economy to meet all the human needs, including food, chemicals, transportation, heating and electricity,” he said.]

Hydricity, a fusion of hydrogen and electricity, is a word coined by the late, great Canadian geophysicist and businessman Geoffrey Ballard, founder of the fuel cell manufacturer Ballard Power Systems.

Recognized world-wide as the father of the fuel cell industry, Ballard was named a “Hero for the Planet” by “Time” magazine in 1999.

“It will take a combined effort of academia, government, and industry to bring about the change from a gasoline economy to a hydrogen economy,” Ballard told the World Hydrogen Energy Conference (WHEC) one year. “The forces are building and progress is being made. It is of major importance that a change of this magnitude not be forced on unwilling participants, but that all of us work together for an economically viable path to change.”

To Ballard and to the study’s co-author Professor Mohit Tawarmalani at Purdue’s Krannert School of Management, the two processes complement one another to overcome the weakness of sunlight’s intermittancy.

“In the round-the-clock process we produce hydrogen and electricity during daylight, store hydrogen and oxygen, and then when solar energy is not available we use hydrogen to produce electricity using a turbine-based hydrogen-power cycle,” explained Tawarmalani.

“Because we could operate around the clock, the steam turbines run continuously and shutdowns and restarts are not required,” he said. “Our combined process is more efficient than the standalone process that produces electricity and the one that produces and stores hydrogen.”

Gençer compared the efficiency of the hydricity process in generating and storing power to that of solar cells.

“The overall sun-to-electricity efficiency of the hydricity process, averaged over a 24-hour cycle, is shown to approach 35 percent, which is nearly the efficiency attained by using the best photovoltaic cells along with batteries,” said Gençer.

“The coproduced hydrogen has alternate uses in the transportation-chemical-petrochemical industries,” said Gençer, “and unlike batteries, the stored energy does not discharge over time and the storage medium does not degrade with repeated uses.”

Agrawal says that the hydrogen, once separated out of the water, can be combined with carbon from agricultural biomass to produce fuel, fertilizer and other products.

“If you can borrow carbon from sustainably available biomass you can produce anything: electricity, chemicals, heating, food and fuel,” Agrawal said.

Their research was published the week of December 14, 2015 in the online early edition of the journal “Proceedings of the National Academy of Sciences.”

The research was funded by the U.S. Department of Energy through the DOE‘s Center for Direct Catalytic Conversion of Biomass to Biofuels at Purdue’s Discovery Park and through a Solar Economy project led by Agrawal under the National Science Foundation’s Integrative Education and Research Traineeship Program.