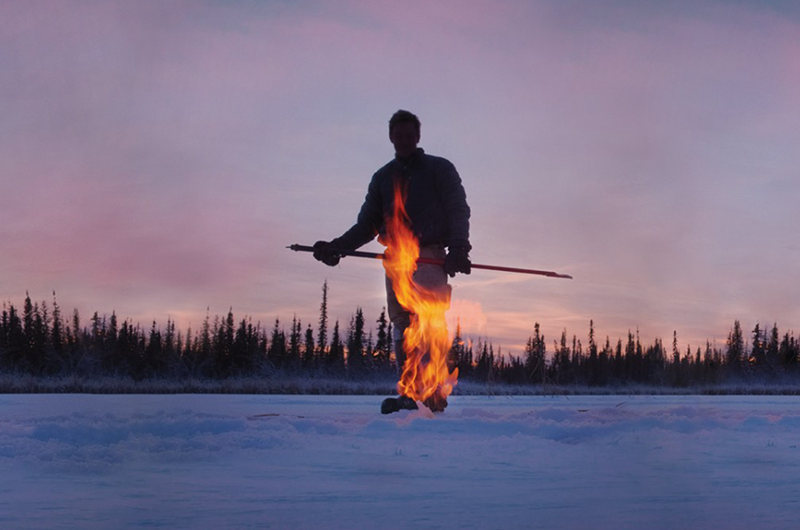 Ice on Fire, is a new documentary about climate change and what can be done in response to it. It takes a look at some of the innovative solutions that are being discovered all across the world to combat the potential catastrophic effects of climate change before it is too late. The film, released by HBO in June, and narrated by Oscar winner Leonardo Di Caprio, highlights the scientific evidence which shows that the effects of climate change are only going to become more catastrophic as we continue to release carbon dioxide and methane gas into the atmosphere. While this paints a bleak picture, the documentary’s approach is to focus on the tangible solutions that are being worked on by various experts around the world to help decrease the amounts of carbon dioxide in the atmosphere. As Di Caprio says at the beginning of the film; “this disturbing future need not be set in stone, we have long had alternatives to fossil fuels, but more recently we have actually discovered how to pull carbon out of the atmosphere giving us a chance at reversing climate disruption.”

The clock is ticking

“If we are able to reverse climate change in time it would be an unprecedented achievement in human history. But the clock is ticking.” – Leonardo Di Caprio, Ice on Fire.

Scientists have established a carbon budget which measures how much carbon we can still emit into the atmosphere and what the ‘cap’ is before dangerous levels of global warming occur. As The Guardian puts it; “To have a good chance of keeping global warming under two degrees Celsius, there is only a finite amount of carbon pollution the world can emit – this amount can be thought of as a fixed budget amount, or quota.”

As one of the experts in the documentary says; “We can still avoid breaching that dangerous limit of two degrees but if you do the Math, with each passing year of relative inaction it’s getting more and more difficult to limit our carbon emissions and remain under two degrees Celsius warming.”

For example, if we are going to stay within the goal of stopping global warming at 1,5 degrees then the Carbon Clock estimates that, there are only 8 years and 7 months left until the planet’s carbon budget is depleted.

Ottmar Edenhofer, Director of the Mercator Research Institute on Global Commons and Climate Change, who established the Carbon Clock, says; “If we want to avoid dangerous climate change then we have to accept that the atmosphere is for humankind a limited disposal space. So roughly, we can emit 800 gigatons CO² into the atmosphere into this limiting disposal space. And if you take into account that over the last five years, we have already used 200 gigatons. So this basically means that over the next two decades we have exhausted the limiting disposal space.”

The carbon budget creates a realistic margin for life where we can all still survive on this planet, but we have to act now in order to achieve these goals.

“There’s only two things that you can do about the atmosphere. You can either stop putting greenhouse gases up there or you can bring CO² down. That’s it.” – Thom Hartmann, Author.

The Ice on Fire documentary highlights many ways this can be achieved. The natural methods include planting redwood forests, producing biochar, seaweed farms, marine snow, urban farming and more. These solutions use natural systems to enhance the capture of carbon dioxide.

There is also new technology that can take carbon dioxide out of the atmosphere. The documentary gives some examples of scientists and engineers who are developing direct air capture methods. In one example carbon dioxide is captured by air filters and then distributed into greenhouses to feed plants that are growing food. In another example, in Iceland, there is an industrial plant which captures carbon dioxide in the atmosphere and, using geothermal heat, turns it into stone which is sequestered underground.

Besides sequestering carbon from the air, it is equally as important to reduce all carbon emissions into the atmosphere. This means focusing on reducing overall energy consumption as well as switching to renewable energy solutions. It is pointed out in the documentary that solar energy is a technology that was initially quite expensive as an alternative to conventional energy, but it will only get cheaper over time. It is stressed in Ice on Fire that we need to transform our energy sector and move away from fossil fuel energy towards renewable energy as soon as possible.

“Di Caprio says; “We need a multitude of solutions moving forward simultaneously. In order to solve this crisis, it is critical we move to 100% renewable energy now.”

The aim of these two approaches is to achieve a ‘drawdown’ effect to reverse climate change. Drawdown is the turning point at which carbon dioxide and methane gas levels in the atmosphere start to decline on a year-on-year basis. Di Caprio says; “We need a multitude of solutions moving forward simultaneously. In order to solve this crisis, it is critical we move to 100% renewable energy now.”

It is now more profitable than ever to be green

“We are the first generation to see the advance of climate disruption and the last with a chance to fix it.” – Leonardo Di Caprio, Ice on Fire.

As stated in the documentary there are only two ways to stop climate change. One is to reduce the amount of carbon that is put into the atmosphere and the other is to draw carbon out of the atmosphere. The industrial, commercial and municipal sectors play an enormous role in releasing carbon emissions into the atmosphere. Carbon emissions can be the waste products of combustion, which are emitted by power plants to make electricity and energy for industries to power, light, heat and cool entire municipalities, factories, buildings, hospitals, offices, shopping malls, stadiums and other industrial and commercial facilities. Making your business more energy efficient will help achieve the first objective of reducing the amount of carbon going into the atmosphere. Not only does this benefit the planet it also has major benefits for your business. At Maximpact we use a combination of solutions utilising Artificial Intelligence (AI) and renewable energy to assist you to reduce your energy outputs and costs by up to 60%.

“This new world can be sustainable, innovative and profitable. The green economy is creating millions of jobs and will create millions more. It matches and will surpass the economy of the fossil fuel industry. The challenge to reverse climate disruption opens up opportunity for everyone. It is now more profitable than ever to be green.” –  Leonardo Di Caprio, Ice on Fire.

We’re passionate about sustainability; about helping organisations who are doing good, to do even better, and developing sustainable communities across the globe. Maximpact combines experience, in-depth industry knowledge and applications of game-changing technology. Our consultants are world-class experts in the utilization of the most advanced systems to solve your sustainable energy problems. Contact us today to find out more about how we can help your business become more sustainable.