CAMBRIDGE, Massachusetts, July 21, 2016 (Maximpact.com News) – Private investors such as Microsoft co-founder Bill Gates, Amazon CEO Jeff Bezos, Facebook founder Mark Zuckerberg and Chinese billionaire Jack Ma are among many from around the world who are backing new types of nuclear reactors that will be safer and more efficient than those operating today.

They have formed the Breakthough Energy Coalition, an influential group of investors, committed to investing in technologies that can help solve the urgent energy and climate challenges facing the planet.

The University of California (UC) is the sole institutional investor among the 28 coalition members from 10 countries.

UC’s Office of the Chief Investment Officer has committed $1 billion of its investment capital for early-stage and scale-up investments in clean energy innovation over the next five years, as well as an additional $250 million to fund innovative, early-stage ideas emerging from the university.

“The University of California, with its 10 campuses and three national energy labs, is home to some of the best climate scientists in the world and as a public research institution we take the imperative to solve global climate change very seriously,” said UC President Janet Napolitano. “With access to the private capital represented by investors in the Breakthrough Energy Coalition we can more effectively integrate our public research pipeline to deliver new technology and insights that will revolutionize the way the world thinks about and uses energy.”

“We can’t ask for a better partner than the University of California Office of the President and the Office of the Chief Investment Officer to help accomplish the Breakthrough Energy Coalition’s ambitious goal,” Gates said. “The UC system – with its world leading campuses and labs – produces the kinds of groundbreaking technologies that will help define a global energy future that is cheaper, more reliable and does not contribute to climate change.”

But the excitement in the nuclear industry is being generated by emerging new technologies, such as a traveling wave reactor, a new class of nuclear reactor that utilizes nuclear waste to generate electricity.

Gates is founder and chairman of TerraPower, a company based in Bellevue, Washington that designed the traveling wave reactor.

Conventional reactors capture only about one percent of the energy potential of their fuel. The traveling wave reactor is “a near-term deployable, truly sustainable, globally scalable energy solution,” TerraPower says on its website. 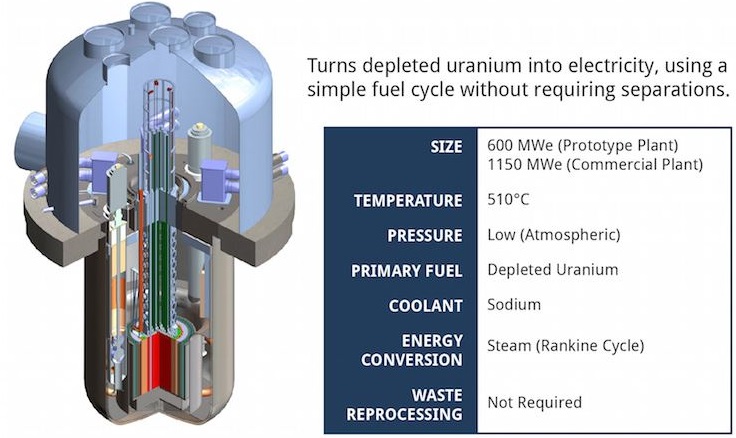 TerraPower’s new traveling wave reactor is based on an original design by Saveli Feinberg in 1958. (Image by TerraPower. Posted for media use)

Unlike the existing fleet of nuclear reactors, the traveling wave reactor (TWR) burns fuel made from depleted uranium, currently a waste byproduct of the enrichment process. The TWR’s unique design gradually converts this material through a nuclear reaction without removing the fuel from the reactor’s core. The TWR can sustain this process indefinitely, generating heat and producing electricity.

The TWR offers a 50-fold gain in fuel efficiency, eliminates the need for reprocessing and reduces and potentially eliminates the long-term need for enrichment plants. This reduces nuclear proliferation concerns and lowers the cost of the nuclear energy process.

As the TWR operates, it converts depleted uranium to usable fuel. As a result, says TerraPower, “this inexpensive but energy-rich fuel source could provide a global electricity supply that is, for all practical purposes, inexhaustible.”

TerraPower aims to achieve startup of a 600 megawatt-electric prototype of the TWR in the mid-2020s, followed by global commercial deployment.

Transatomic Power, a Massachusetts Institute of Technology spinoff, is developing a molten-salt nuclear reactor that co-founders Mark Massie and Leslie Dewan, PhD candidates at MIT, estimate will cut the overall cost of a nuclear power plant in half.

Highly resistant to meltdowns, molten-salt reactors were demonstrated in the 1960s at Oak Ridge National Lab, where one test reactor ran for six years, but the technology has not been used commercially.

The new molten salt reactor design, which now exists only on paper, would produce 20 times as much power for its size as the Oak Ridge technology.

Transatomic has modified the original molten-salt design to allow it to run on nuclear waste.

And it’s safer than today’s water-cooled nuclear power plants. Even after a conventional reactor is shut down, it must be continuously cooled by pumping in water. The inability to do that is what caused the hydrogen explosions, radiation releases and meltdowns at Fukushima.

Using molten salt as the coolant solves some of these problems. The salt, which is mixed in with the fuel, has a boiling point much higher than the temperature of the fuel, giving the reactor a built-in thermostat. If it starts to heat up, the salt expands, spreading out the fuel, slowing the reactions and allowing the mixture to cool.

In the event of a power outage, a stopper at the bottom of the reactor melts and the fuel and salt flow into a holding tank, where the fuel spreads out enough for the reactions to stop. The salt then cools and solidifies, encapsulating the radioactive materials.

“It’s walk-away safe,” says Dewan, the company’s chief science officer. “If you lose electricity, even if there are no operators on site to pull levers, it will coast to a stop.”

Transatomic envisions small, powerful, reactors that are built in factories and shipped by rail instead of being built on site like costly conventional ones.

Both government and private sector organizations are working towards nuclear innovations.

John Kotek, acting assistant secretary for the U.S. Department of Energy’s Office of Nuclear Energy, recalled that last November the White House held a summit announcing the Gateway for Accelerated Innovation in Nuclear (GAIN), “an organizing principal meant to transform the way we execute public-private partnerships.”

GAIN is a new framework for how the Office of Nuclear Energy, in partnership with the Idaho, Argonne, and Oak Ridge National Labs, to leverage people, facilities, and capabilities to better support advancing nuclear technologies.

Kotek said, “We are already seeing huge payoffs from this new approach, including the issuance of a Site Use Permit for identifying potential locations for the first small modular reactor.”

Christofer Mowry, NIA’s other co-chairman, said, “Real change to energy regulation and policy is needed to make these advanced designs commercially available in time to help limit climate change to an acceptable level.”

“Investors and developers need to see a clearer and lower risk path to their deployment,” said Mowry, “including an innovation-enabling licensing framework and more substantive public-private partnerships for rapid deployment.”

At the same time, some of the largest environmental groups are easing their negative positions on nuclear power.

The “Wall Street Journal” reported in June that the Sierra Club, the Environmental Defense Fund (EDF) and the Natural Resources Defense Council (NRDC) are concentrating more on preventing runaway climate change and less on the dangers of nuclear power than they have in the past.

Greenpeace and other environmental groups continue to urge the shutdown of existing nuclear plants, for fear that the environmental dangers outweigh the climate benefits.