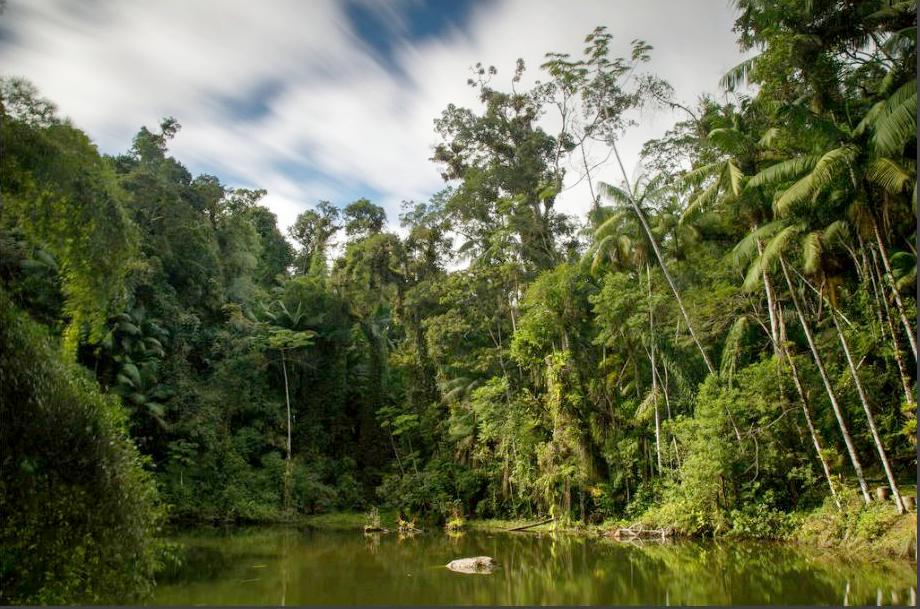 The Atlantic rainforest in Brazil is a unique ecosystem. June 1, 2017 (Photo by Ulrich Peters) Creative commons license via Flickr.

Developed for the use in Brazil’s Atlantic rainforest, Nucleário was designed for multiple functions – collecting rain and dew water, providing protection from leaf cutter ants and invasive species, supplying shade for the seedling, and deployment from the air.

Applied in the field, the Nucleário Planting System makes the forest restoration process simpler and more cost-effective. With this method, Nucleário can get more trees in the ground in less time, helping make it possible to achieve environmental goals like the Paris Agreement on climate.

The Ray of Hope Prize is the top award in the Biomimicry Launchpad, an accelerator program run by the Biomimicry Institute that supports entrepreneurs working to bring early-stage biomimetic, or nature-inspired, climate change solutions to market.

Inspired by winged seeds, bromeliads, and forest leaf litter, Nucleário is a reforestation solution for forests in degraded and hard to reach areas, helping seedlings grow without human maintenance.

Made of biodegradable materials, the Nucleário device ensures that seedlings survive by providing a protection from leaf cutter ants, collecting water from rain and dew, offering shade, and protecting against invasive species.

Like anemochory seeds, the Nucleário is structured to be weightless and incorporate air chambers, which allows it to act as both a glider and parachute and enables aerial deployment.

The Nucleário shape emulates the leaf litter in a forest, stopping the Brachiaria grass growth around the seedling and protecting the soil against leaching and strong sunlight, which elevates soil moisture and fertility.

In the field, the Nucleário improves the working conditions of the planting teams and reduces costs for labor, transport, irrigation, fertilizers and insecticides.

It mimics how bromeliads collect water from rain and dew to provide a microclimate that attracts biodiversity.

“The six judges were impressed with all of the teams, but the Nucleário stood out because they have a clear understanding of the path to commercialization,” said Lanier.

Brazil is one of the main producers and exporters of agricultural products, with more than 300 million hectares destined to agriculture, according to data from the Brazilian Institute of Geography and Statistics. But this sector is also responsible for tons of carbon in the atmosphere, warming the planet.

The Brazilian government has said it intends to reforest 12 million hectares by 2030, as a goal to reduce carbon dioxide emissions.

A set of studies by the Center for Sustainability Studies of the Getúlio Vargas Foundation and Instituto Escolhas calculated the resources needed to achieve this goal. The estimated investment cost was $31 billion Brazilian Reals (€7.9 billion) (US$8.3 billion).

Beth Rattner, Biomimicry Institute executive director, said, “30 by 30 – land use being 30 percent of climate change solutions by 2030 – is the most promising news on the horizon because it is highly feasible. Reforestation is a real part of this plan and yet most efforts on this front are failing because young saplings need extra help to survive.”

“Nucleário has captured proven strategies straight from the forest to make their product, which is something no one else has tried before,” said Rattner. “We are immensely hopeful about the impact this will have.”

A $25,000 Ray of Hope second prize, funded by an anonymous donor, went to a team with members from Mexico and the United States, who created Biomimicry Launchpad, a thermal management system that harvests waste heat from large commercial buildings and cycles it back into the system.

The BioThermosmart design was inspired by elephants, crocodiles, toucan beaks, and the human circulatory system to create a system of heat transfer patches that help facility directors manage excess heat.

A total of six international teams spent the past year in the Biomimicry Launchpad, the world’s only accelerator for early-stage, nature-inspired innovations.

As winners of the Challenge, these teams were invited to join the Biomimicry Launchpad to get support in testing and prototyping their ideas, with the ultimate goal of bringing their climate change solutions to market.

A new round of the Biomimicry Global Design Challenge has just launched, focused again on finding nature-inspired climate-change solutions. It is a new opportunity for teams to join and compete for the annual $100,000 Ray of Hope Prize®. Individuals and teams can learn more about the Challenge at challenge.biomimicry.org.