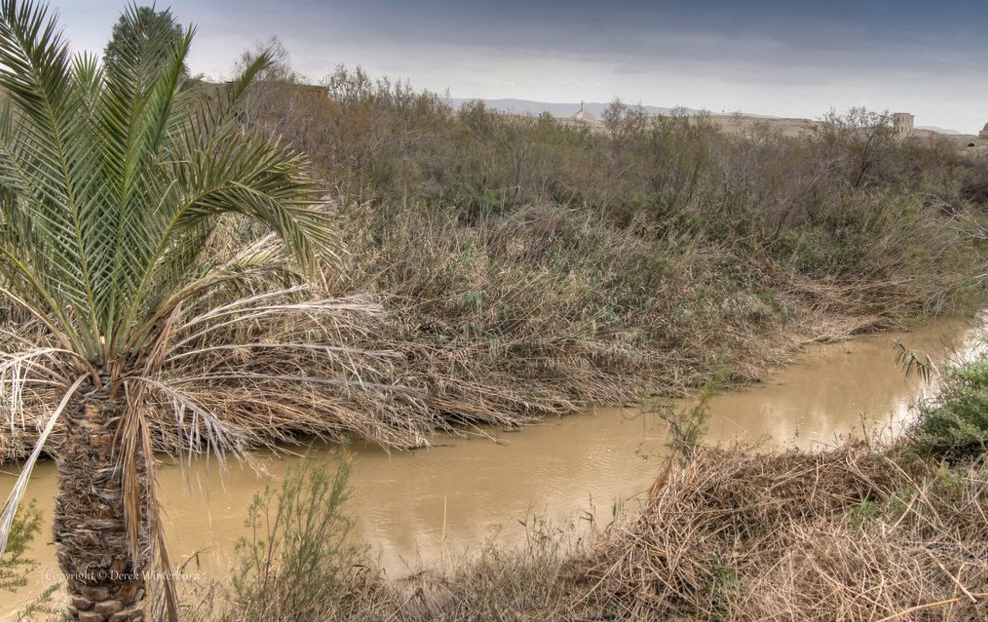 In this arid region torn by many differences and struggles, non-governmental organizations (NGOs) from Israel, Jordan and Palestine are working together to restore the Jordan River – unity forged on the anvil of fear for their life-giving waterway.

The river flows 251 kilometres (156 miles) to the Dead Sea from sources in the Anti-Lebanon Mountains that divide Syria from Lebanon. Israel and the Palestinian territories border the river to the west, while the Golan Heights and Jordan lie to its east.

Though the Jordan River is depleted and polluted, its water is desperately needed by migrants fleeing the Syrian civil war. Some 600,000 have settled in dry and water-scarce Jordan, including 150,000 that have made their home in Za’atari, the world’s second largest refugee camp.

Ecopeace Middle East, formerly Friends of the Earth Middle East, has been working with its NGO counterparts to ensure restoration of the river.

In June, the NGOs invited politicians and decision makers from the three countries to an international conference, “Planning for Our Shared Future: Public Release of NGO Regional Master Plan for Sustainable Development in the Jordan Valley.” Read full report here

There at the Crowne Plaza Hotel, Dead Sea, Jordan under the patronage of the Jordanian Minister of Water Dr. Hazim al Nasser, the first-ever integrated regional NGO Master Plan for rehabilitation of the Jordan River was introduced.

“From a Palestinian perspective the Master Plan helps advance a two state solution with an independent Palestine prospering in the West Bank of the Jordan Valley due to full access and riparian rights to both water and land resources in the valley. All sides will gain when independence and integration lead to economic prosperity,” said Nader Khateeb, EcoPeace Middle East Palestinian co-director.

Government officials, too, participated. Ayoub Kara, Israel’s deputy minister of regional cooperation, told conference delegates, “The Jordan River is not a normal river. It is one of the most important rivers in the world. It is in the hearts of 100s of millions of people around the world. The project for developing the Jordan River is a responsibility not just for our region but for the whole world.”

“Agricultural, economic, rural and touristic projects as well help form a peaceful interaction,” said Kara. “We have to, today, find every way possible to protect and develop the natural treasures that God has given us, including the Dead Sea.”

The conference marked the conclusion of a three-year program funded by the European Union. It gathered many high-level government officials from Jordan, Palestine and Israel, international diplomatic representatives, development agency representatives, and environmental experts to discuss the advancement of the program from planning to implementation.

The Master Plan was presented according to its seven strategic planning objectives:

The Master Plan identifies 127 specific regional and national projects or “interventions,” related to the strategic planning objectives, with a total investment value of US$4.58 billion through the year 2050.

The conference concluded with clear support from government representatives to continue the work presented in the Master Plan and to advance its interventions to secure sustainable development and prosperity in the Jordan Valley.

“The current turmoil makes regional cooperation at the government level even more difficult, yet there is work going on in a parallel basis,” she said, pointing to projects in all three countries.

In Palestine, Jericho is expanding the sewage network of the city.

And the Jordan Valley Regional Council is completing a new lookout at the area of the proposed Jordan River Peace Park.

Government agencies in each of the three countries contributed much to the process of formalizing the Master Plan.

“The Jordan Valley Authority, has greatly contributed to the development of the Master Plan. Data collection and support with identifying projects would not have happened without their involvement, support and assistance,” said Edelstein.

The Jordanian Ministry of Municipal Affairs demonstrated the “political will to work with Israel and Palestine on water and environmental issues,” she said. The Ministry of Agriculture expressed its willingness to support the master plan.

Jordan’s Ministry of Environment and the Ministry of Water and Irrigation both supported the consultants with data for the baseline study and report, the environmental status of the Valley, the sources of pollution and their measures to control and mitigate these impacts on the Jordan Valley.

At the June conference, Secretary General of the Jordan Valley Authority Eng. Saad Abu Hammour said in a statement, “The projects articulated in the master plan are important for Jordan, in particular those that deal with wastewater and solid waste management.”

Among the priorities of the Jordanian Ministry of Water and Irrigation is the implementation of these projects through donor agencies and the Jordanian government, said Hammour.

Funding negotiations are ongoing, said Edelstein of Ecopeace Middle East. “We are focused on an additional investment plan and moving forward a financial strategy. We will hold meetings in London, Brussels and Washington D.C. on financing issues,” she said.

Dr. Mohammed Hmaidi, CEO of the Palestinian Water Council said, “The Palestinian delegation came from five different governmental institutions and that shows, that just like Jordan and Israel, we are interested in this conference, its recommendations, and outcomes.”

“The Master Plan is in harmony with the Palestinian policies and expectations,” said Hmaidi. “We do have national strategies and plans, and the proposed interventions do not contradict with these plans and priorities. There are a number of initiatives that can be implemented as of tomorrow.”

In Israel, there already was a National Master Plan for the Israeli section of the River, so the Israelis were seeking acceptance of the regional vision.

Adi Ashkenazi, director of the Economic Research Division of Israel’s Ministry of Regional Cooperation, said, “The most important thing that we learned from what we saw here is the great willingness and the commitment of the people that came here from all parties – the Palestinians, the Jordanians, and also ours, our people in Israel – to rehabilitate this river.”

Edelstein said the most urgent need is funding for specific “interventions” that are identified in the Master Plan that can move forward immediately, needing about US$500 million.

“With the continued instability throughout the region, the Jordan Valley effort is a real ‘Marshal Plan’ effort that could be a model for regional integration for the whole region,” she said. “If we do not counter 50% youth unemployment in the Jordan Valley, we should not be surprised to see increased radicalization in the region.”

Featured image: Boys enjoy a dip in the Jordan River as a break in a dusty, desert day. (Photo by Hannah Temple under Creative Commons license via Flickr)

Header image: The Jordan River is a muddy trickle near Jericho, near the Dead Sea. (Photo by Derek Winterburn under Creative Commons license via Flickr)

One thought on “Israel, Jordan, Palestine Unite for Jordan River”