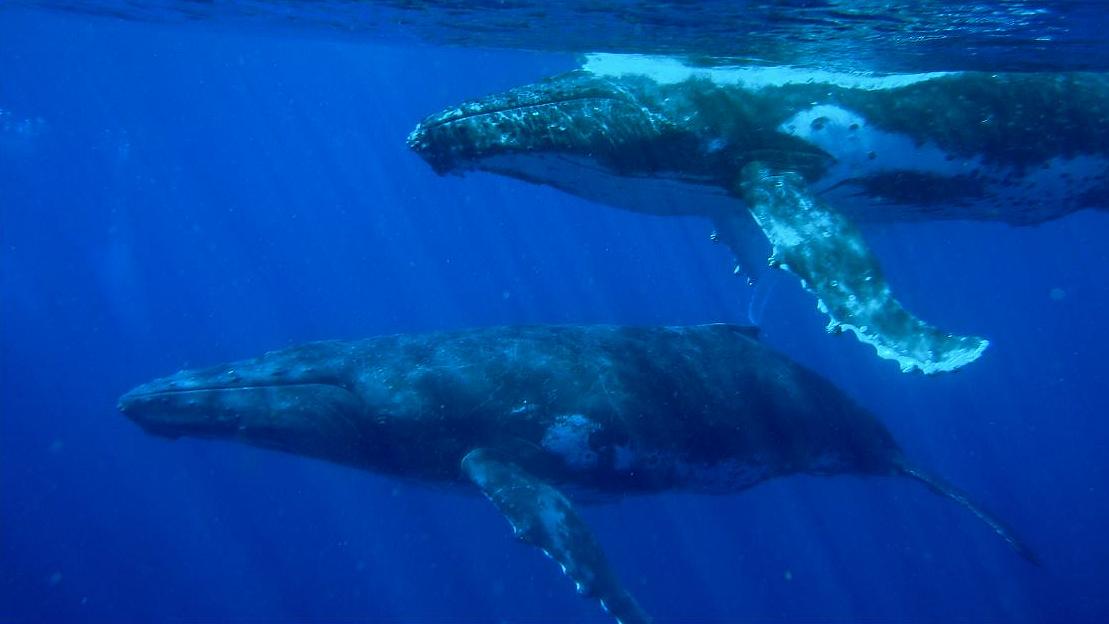 HONOLULU, Hawaii, September 6, 2016 (Maximpact.com News) – “The IUCN Congress will set the course for using nature-based solutions to help move millions out of poverty, creating a more sustainable economy and restoring a healthier relationship with our planet,” said World Bank Group president Jim Kim, as the conference opened in Honolulu September 1.

Based in Switzerland, the International Union for the Conservation of Nature (IUCN) holds a World Conservation Congress every four years. This year, over 8,300 delegates from 184 countries, including Heads of State of many Pacific Island nations, are in attendance at the Hawaii Convention Center.

To address an estimated US$200-300 billion annual funding gap in conservation, civil society organizations, private and public sector financial institutions and academia joined forces Friday to launch the Coalition for Private Investment in Conservation during the IUCN World Conservation Congress.

The Coalition’s goal is to help preserve the world’s most important ecosystems by creating new opportunities for return-seeking private investment in conservation.

The Coalition includes Credit Suisse, The Nature Conservancy, Cornell University and the IUCN as the founding members. Participants plan to develop new investment models and funding pipelines that will help close the conservation funding gap and contribute to the global goals for biodiversity conservation and sustainable development.

“We already bring a wealth of experience into this Coalition,” says Lynn Scarlett, managing director of public policy for The Nature Conservancy. “At the Conservancy, we have already facilitated six impact investment deals totaling $200 million dollars in marine conservation and agriculture, and this new coalition should help us bridge our largest challenge, which is a lack of investment projects in the pipeline. We’ll know we’ve reached success when the big banks have enough projects as options that they can pick and choose where conservation investment will have the most significant impact.“

This week, IUCN Congress delegates, meeting in the middle of the Pacific Ocean, will vote on a motion to increase marine protected area coverage for effective marine biodiversity conservation.

Not far from where they are meeting, the Papahānaumokuākea Marine National Monument covering the Northwest Hawaiian Islands, a UNESCO World Heritage site, was expanded last week by President Barack Obama to create the world’s largest marine reserve.

On Midway Atoll, scene of a WWII battle that was a turning point in the war, Obama designated the newly protected area, calling it,  “spectacular as an ecosystem.“

“And our ability to not just designate, but build on, this incredible natural beauty, which is home to 7,000 marine species that sees millions of birds, many of them endangered, sea turtles, the Hawaiian monk seal, black coral – all sorts of species that in many other places we no longer see – for us to be able to extend that 550,000 miles in the way that we’ve done ensures not only that the Midway Atoll is protected, but that the entire ecosystem will continue to generate this kind of biodiversity.”

Obama said it is “critically important for us to examine the effects that climate change are taking here in the Pacific Ocean, the world’s largest body of water.“

He pointed out that some Pacific island countries are now at risk and may have to move as a consequence of climate change. “There are enormous effects of the human presence in the ocean that creatures are having to adapt to and, in some cases, cannot adapt to.“

Anote Tong, former president of the Republic of Kiribati, the world’s lowest-lying island nation, confirmed that his people may become climate refugees, saying, “You worry about the polar bears; so do we. But nobody is worried about us, because we will lose our homes too with the melting ice and the rising sea level.“

From microorganisms to whales, ocean warming is affecting many species and its effects are cascading through ecosystems, as outlined in a new IUCN report released in Honolulu.

The report, “Explaining Ocean Warming: Causes, scale, effects and consequences,” reviews the effects of ocean warming on species, ecosystems and on the benefits oceans provide to humans. Compiled by 80 scientists from 12 countries, it highlights detectable scientific evidence of impacts on marine life, from microorganisms to mammals, which are likely to increase even if greenhouse gas emissions are kept low.

“From the poles to the tropics, plankton, jellyfish, turtle, fish and seabird species are on the move, shifting by up to 10 degrees of latitude to find cooler habitats, while some breeding grounds for turtles and seabirds disappear,” says the IUCN.

Another motion to be voted on this week at IUCN Congress deals with advancing conservation and sustainable use of biological diversity on the high seas, which account for two-thirds of the world’s oceans.

A motion to achieve representative systems of protected areas in Antarctica and the Southern Ocean also will come up for a vote.

The Congress is also expected to decide on motions dealing with regional approaches to tackling the global problem of marine litter, and on the protection of marine and coastal habitats from mining waste.

But as important as ocean conservation has become, Congress delegates are spending most of their time grappling with the toughest land-based conservation issues.

A total of 85 motions  have been put to the electronic vote by the IUCN Membership, who adopted all 85 motions, some with amendments.

Delegates Sunday considered guidelines on climate change best practices, the place of the law in the future of conservation, how to manage transboundary ecosystems through experiences in “hydro-diplomacy” and governance of shared waters, and ways of transforming Africa’s development through Chinese investments.

“Our planet is most certainly at a crossroads,” declared IUCN President Zhang Xinsheng at the opening ceremony on Thursday.

“The path we take as a global community, and how we choose to walk down that path in the next few years, will define humanity’s opportunities for generations to come. These decisions will also affect the boundaries of those opportunities,” said Zhang. “As we all know, there are limits to what our Earth can provide, and it is up to us to make the decisions today that will ensure those resources are still here tomorrow.“

The latest update of the IUCN Red List of Threatened Species, released at the conference, indicates that many of the world’s gorillas may not be here tomorrow.

The Eastern lowland gorilla, called Grauer’s gorilla, Gorilla beringei graueri, is newly listed as Critically Endangered due to illegal hunting for bushmeat, which is taking place around villages and mining camps established by armed groups deep in the forests in eastern Democratic Republic of Congo.

Gorillas are divided into two species, Eastern and Western, each with two subspecies. Both species and all four subspecies of gorilla are now listed as Critically Endangered. 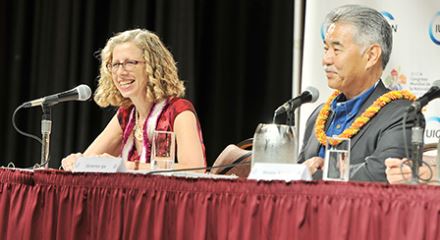 “To see the Eastern gorilla, one of our closest cousins, slide towards extinction is truly distressing,” said Inger Andersen, IUCN director general.

“We live in a time of tremendous change and each IUCN Red List update makes us realize just how quickly the global extinction crisis is escalating,” said Andersen. “Conservation action does work and we have increasing evidence of it. It is our responsibility to enhance our efforts to turn the tide and protect the future of our planet.“

The IUCN’s Red List update also reports the decline of the Plains Zebra, Equus quagga, due to illegal hunting.

The once widespread and abundant Plains Zebra has moved from a listing of Least Concern to Near Threatened. The population has reduced by 24 percent in the past 14 years from around 660,000 to a current estimate of just over 500,000 animals.

Three species of duiker, a small African antelope, also have been moved from a listing of Least Concern to Near Threatened.

“Illegal hunting and habitat loss are still major threats driving many mammal species towards extinction,” says Carlo Rondinini, coordinator of the mammal assessment at Sapienza University of Rome “We have now reassessed nearly half of all mammals. While there are some successes to celebrate, this new data must act as a beacon to guide the conservation of those species which continue to be under threat.“

The IUCN Red List update holds some good news for the Giant Panda and the Tibetan Antelope, demonstrating that conservation action can deliver positive results.

Previously listed as Endangered, the Giant Panda is now listed as Vulnerable, as its population has grown due to effective forest protection and reforestation.

The improved status confirms that the Chinese government’s efforts to conserve this species are effective. Still, climate change is predicted to eliminate more than 35 percent of the panda’s bamboo habitat in the next 80 years and as a result, the panda population is projected to decline, reversing the gains made during the last two decades.

Due to successful conservation actions, the Tibetan Antelope has been moved from a listing as Endangered to Near Threatened.

The Tibetan Antelope population crashed from around one million to an estimated 65,000-72,500 in the 1980s and early ’90s as a result of commercial poaching for their underfur, called shahtoosh, used to make shawls. Rigorous protection has been enforced since then, and the population is now likely to be between 100,000 and 150,000.

The IUCN warns of the growing extinction threat to Hawaiian plants posed by invasive species.

Invasive species such as pigs, goats, rats, slugs, and non-native plants are destroying the native plants of Hawaii. The latest results show that of the 415 endemic Hawaiian plant species assessed so far for the IUCN Red List – out of about 1,093 plant species endemic to Hawaii – 87 percent are threatened with extinction.

Perhaps the biggest jolt to the Congress occurred late last week when the Great Elephant Census was released showing that numbers of African savanna elephants have dropped 30 percent – 144,000 elephants – between 2007 and 2014.

The census is the result of a two-year-long study, the centerpiece of which was an aerial survey, the first in 40 years, that covered nearly 345,000 square miles over 18 countries. Pilots and census crews followed strict protocols to ensure they gathered consistent data.

The census was a collaboration between billionaire and Microsoft co-founder Paul G. Allen, his organization, Vulcan, and Elephants Without Borders, African Parks, the Frankfurt Zoological Society, the Wildlife Conservation Society, the Nature Conservancy, the IUCN African Elephant Specialist Group and Save the Elephants, as well as a long list of conservation officials in the countries surveyed.

“Even with this new hoard of data and examples of effective conservation practices across Africa, saving the elephants remains a challenge of continental dimensions,” said Allen. “Poverty and corruption still remain very serious problems in countries that are home to the worst killing grounds, and these factors continue to drive a thriving international ivory market – along with similarly voracious demand for horns from endangered rhinos.“

“As you’ve been reading this, poachers likely killed another African elephant for its tusks – an atrocity that takes place, on average, every 15 minutes,” said Allen.

A few hopeful signs emerged from the Great Elephant Census. Relative success stories include Botswana, South Africa, Uganda, Kenya, and the complex of parks spanning the border of Burkina Faso, Niger and Benin.

Allen says that in countries where poaching is still rampant, such as Tanzania and Mozambique, “...the survey’s alarming results have spurred officials to strengthen protections for their surviving elephants, and to crack down on the criminal networks that are driving the slaughter. Only time will tell, though, if they can arrest both the poachers and ivory smugglers and reverse the sharp decline of their elephant populations.”