Jumping In to Remove Dams Across Europe 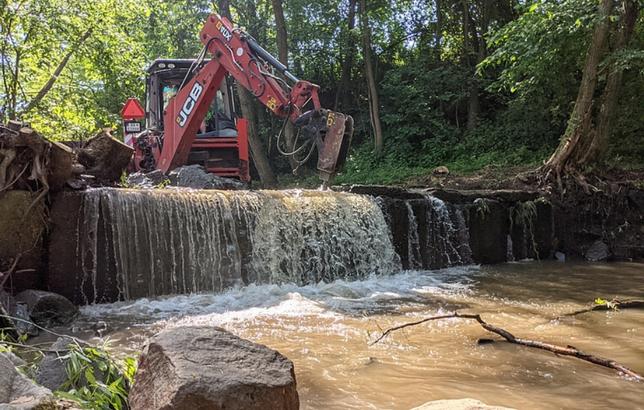 VIENNA, Austria, August 17, 2021 (Maximpact.com | sustainable solutions news) – Citizens from across Europe have jumped together to crowdfund removal of dams on a range of rivers across the continent. The 2021 edition of the Big Jump event in mid-July was the first joint crowdfunding action to be carried out at the same time in multiple European countries.

The simultaneous dam removal crowdfunding is led by the global nonprofit WWF in coordination with Dam Removal Europe and the European Rivers Network. It was shared by about 400 nature conservation groups mobilizing people across the continent to jump in and crowdfund for rivers.

“Rivers have an extraordinary capacity to recover once we let them run free again. Nothing can restore rivers as fast and effectively as dam removals. It is a quick action with swift results,” Irene Lucius, regional conservation director, WWF Central and Eastern Europe, said.

“A one-time investment followed by a lifetime of benefits, including return of migratory fish and other wildlife and plants, better water quality, natural capacity to reduce impact of extreme floods, greater resilience to climate change etc.,” she said.

To watch a WWF video about removal of barriers on the rivers of Europe, click here https://youtu.be/-l4FJWPQ3zs

The barriers Big Jump 2021 is crowdfunding to remove are located in Spain, UK, France, Italy, Ukraine and Germany.

The Big Jump event followed the crowdfunded removal in July of an obsolete weir that was an impermeable barrier on the Hučava River in Slovakia. 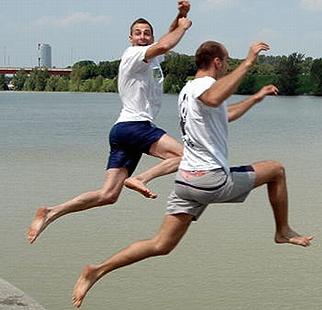 Men participate in The Big Jump 2021 by enjoying a river in the Jezera Eco-Center near Bijeljina, a city in Bosnia and Herzegovina.

The Hučava flows from the caldera of Polana, the highest volcanic mountain in Slovakia, which is part of Europe’s NATURA 2000 Network and is also on the UNESCO list of Biosphere Reserves. This river hosts the Eurasian otter, Common kingfisher, and Black stork.

“Removal of dams which are old and useless is the best way of freeing a river,” says Miroslava Plassmann, CEO of WWF Slovakia. “It improves its ecological status and biodiversity, restores the function of the river landscape, including water retention, and thus contributes to the mitigation of climate crisis.”

“Hučava dam removal is just a beginning. Together with other partners, we already finalize an evaluation of other river barriers suitable for removal,” Plassmann said.

Founded in 2002 by the European Rivers Network, Big Jump’s previous editions have attracted more than 300,000 people to take part in over 2,100 events in 36 countries.

The Big Jump 2021 inspired thousands to jump into rivers across the continent to focus attention on the poor state of most of them and how removing old and useless barriers can swiftly benefit people and nature.

No Carpathian river splash dam has been used since 1979, WWF says. They have gradually decayed over time, though they still serve as obstacles for migratory fish such as brook trout and Endangered Danube Salmon.

Following a successful international crowdfunding campaign, the Lostunets Dam was the first dam to be removed in 2020 under WWF-Ukraine’s new Splash Dam Removal Project.

WWF says it needs the new crowdfunding effort to have the Bayurivka splash dam removed from Verkhovynskyi National Park. Removal of the barrier will allow the brook trout and endangered Danube salmon to migrate upstream to their spawning areas.

The Bayurivka splash dam was constructed across the Perkalaba River in the 19th century and was used until the mid-20th century. “The removal will support a free flow of aquatic organisms and sediments, directly increasing the natural riverine processes, river biodiversity and creates favourable conditions especially for the natural fish population,” WWF explains.

Verkhovynskyi National Park is the only park in the Ukrainian Carpathians where ancient Jurassic limestone blocks are scattered on the slopes of the ridges, create exotic landscapes and habitats for many rare plant species. The park features “primeval forests and subalpine zones, supporting endemic and relict species and communities, and the springs of White and Black Cheremosh rivers,” according to the Verkhovynskyi National Park administration.

Due to the park’s remoteness and its hardly accessible alpine landscape, the untouched nature and the traditional culture of mountain farming still persist in Verkhovynskyi.

The park also is rich in exceptional natural and cultural sites. The Verkhovyna district is the center of the Hutsul region, an area with many important monuments and archaeological sites. The lifestyle and customs of the Hutsuls are of great interest to tourists, stimulating the development of what the park administration calls “green tourism.”

Estimates point to at least one million barriers on waterways in 36 European countries – over 150,000 of which are obsolete and currently serve no purpose, WWF says. Yet as long as they remain in place these barriers undermine the health of rivers and contribute to the nature crisis – especially to the 93 percent decline in migratory fish across Europe.

A recent WWF study analyzing 30,000 river obstacles – three percent of the estimated one million barriers in Europe – show a reconnection potential of nearly 50,000 kilometers, double the current target of 25,000 km set by the European Commission in its 2030 Biodiversity Strategy, https://ec.europa.eu/environment/strategy/biodiversity-strategy-2030_en#the-business-case-for-biodiversity a core part of the European Green Deal.

The barriers are small but numerous. At least 600,000 dams in Europe are small obstacles under two meters (less than six feet) in height, which might appear less harmful than higher dams. But the campaigners say a series of smaller barriers along the same stream have a huge cumulative impact on the health of that waterway, wrecking the benefits that it could have continued to provide to people and nature.

Anyone can still get involved in the Big Jump 2021 and get current donation totals and further information. For details, visit: https://crowdfunding.wnf.nl/

“We are now at a crossroads,” Lucius declared. “Europe can choose to speed up restoration. Or reverse it. Only people power can ensure our politicians choose the right path. Together Possible!”