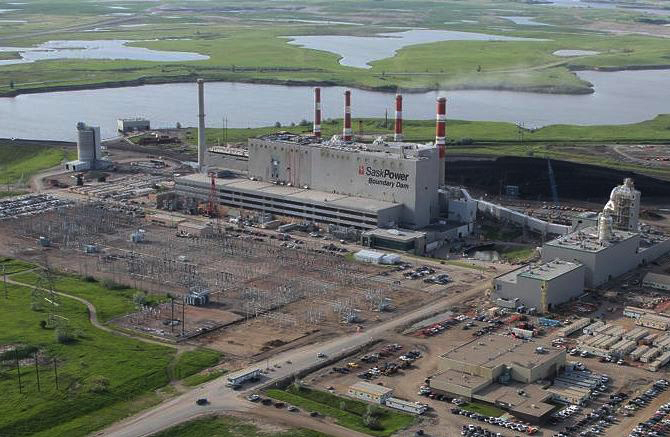 LONDON, UK, April 5, 2016 (Maximpact.com News) – Since the Paris Climate Agreement was reached in December, preventing the greenhouse gas carbon dioxide (CO2) from entering the atmosphere has become a top priority for many governments, utilities and private individuals who believe climate change to be the major problem of this generation.

Carbon capture and storage (CCS) enables a power station or factory that burns coal, oil or gas to remove the CO2 before it reaches the atmosphere and store it permanently in an old oilfield or a deep saline aquifer formation.

Some attempts at capturing and storing CO2 have been more successful than others.

The captured CO2 is then transported by pipeline or ship to the storage location. Millions of tonnes of CO2 are now transported for commercial purposes each year by road tankers, ships and pipelines.

Once at its destination, the captured CO2 is stored in geological rock formations typically located several kilometers below the surface.

At every point in the CCS chain, from production to storage, industry can use a number of process technologies that are well understood and have excellent health and safety records, says the London-based Carbon Capture and Storage Association (CCSA). 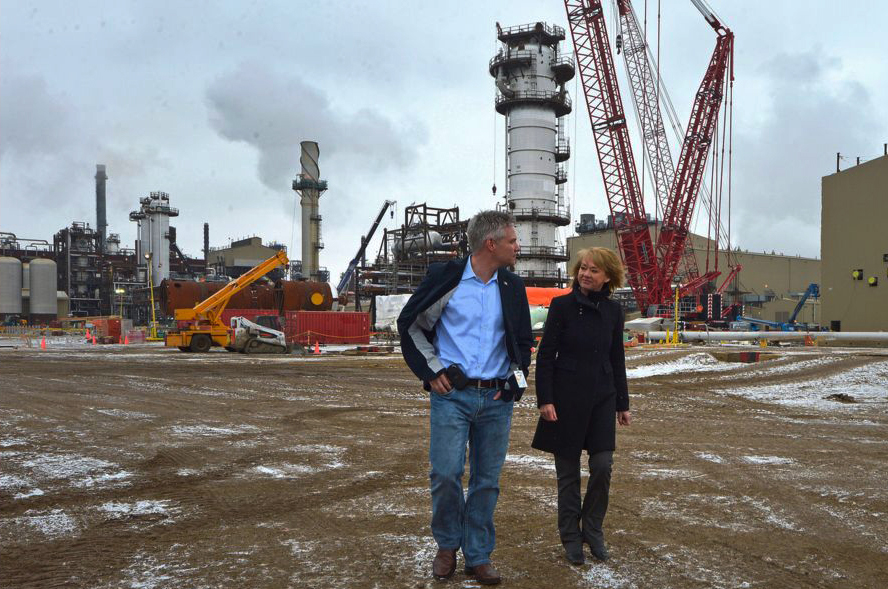 Alberta Minister of Energy Diana McQueen and Conservative MP Mike Lake tour the Quest Carbon Capture and Storage facility at Shell’s Scotford plant near Fort Saskatchewan on April 17, 2014. The project is retrofitting the Scotford bitumen upgrader for carbon capture, designed for up to 1.2 million tonnes of CO2 captured per year, piped 80 kilometers north and injected more than two kilometers below the Earth’s surface. (Photo by Chris Schwarz courtesy Government of Alberta) Public Domain

The Canadian province of Quebec is excited enough about this possibility that it just bet Cdn$15 million on a new enzyme-based technology.

Quebec has established a goal to reduce its greenhouse gas emissions by 20 percent below 1990 levels by 2020, and 37.5 percent below this same level by 2030.

In its 2016-2017 Budget, released March 17, the Quebec provincial government announced that it has allocated $15 million over the next three years to create a consortium that will promote adoption of CO2 Solutions’ patented enzyme-enabled carbon capture technology.

The process is now ready for commercialization.

In the Canadian province of Saskatchewan, the Boundary Dam Integrated Carbon Capture and Storage Project is SaskPower’s flagship CCS initiative.

This project transformed the aging Unit #3 at Boundary Dam Power Station near Estevan into a long-term producer of up to 115 megawatts of base-load electricity, capable of reducing greenhouse gas emissions by up to one million tonnes of carbon dioxide (CO2) a year, the equivalent of taking more than 250,000 cars off Saskatchewan roads annually.

Aquistore is a research and monitoring project to demonstrate that storing liquid CO2 deep underground in a brine and sandstone water formation is a safe, workable solution to reduce greenhouse gases.

Through the development of the world’s first and largest commercial-scale CCS project of its kind, SaskPower hopes to make a viable technical, environmental and economic case for the continued use of coal.

In Norway last December, Aker Solutions signed a contract with the city of Oslo for a five-month test CCS project to capture CO2 emissions from the city-operated waste-to-energy Klemetsrud plant.

The project is funded by Gassnova, the state enterprise that supports the development and demonstration of technologies to capture CO2.

“This is pioneering work with significant potential as the world focuses on finding ways to limit carbon emissions,” commented Valborg Lundegaard, head of Aker Solutions’ engineering business. “This pilot project is of international importance.”

The test will be key to qualifying Aker Solutions’ amine-based CO2 capture technology for commercial application at the world’s waste-to-energy plants. There are about 450 such plants operating in Europe and about 700 globally.

Japan is preparing to test its biggest project yet for capturing and storing CO2 under the ocean floor despite concerns about cost and the safety of pursuing the technology in a region prone to earthquakes.

Starting this month, engineers plan to inject CO2 into deep saline aquifers off the coast of Hokkaido at the northern tip of Japan. The gas will be captured from a refinery operated by Idemitsu Kosan Co. under the government-backed project.

Some Japanese companies are already lending their expertise to and investing in CCS projects overseas.

Mitsubishi Heavy Industries Ltd. designed and built a project in the U.S. state of Alabama with the utility Southern Company.

Three of the six companies building the world’s largest CCS project on Barrow Island off the northwest coast of Western Australia are Japanese. Although a Class A Nature Reserve, Barrow Island is said to be a location where industry and the environment co-exist.

All 51 modules required for the three LNG trains have been delivered to Chevron’s Gorgon CCS project on Australia’s Barrow Island. (Photo courtesy Chevron)

On March 20, Chevron announced that its first shipment of LNG from the Gorgon Project had left Barrow Island. The cargo goes to Chubu Electric Power, for delivery into Japan.

“Departure of the first cargo from the Gorgon Project is a key milestone in our commitment to be a reliable LNG provider for customers across the Asia-Pacific region,” said Mike Wirth, executive vice president, Chevron Midstream and Development. “This is also important for our investors as we begin to generate revenue from a project we expect will operate for decades to come.”

But bad news appears to dog the CCS industry.

On Friday, the Gorgon project had to temporarily halt production due to technical difficulties with a propane refrigerant circuit at the Gorgon plant site.

Chevron and its Gorgon partners are facing a repair bill that could amount to “hundreds of millions of dollars” after “a major mechanical problem flared as soon as the maiden LNG cargo was sent,” reported the “West Australian” newspaper on Friday.

There are many skeptics, given that it can cost billions of dollars for a CCS facility and none have a long record of successful operation at an industrial scale. Some investors initially put their money into carbon capture and storage (CCS) technologies only to see their CCS plans fail or get tossed out by governments.

“It is our view that CCS is unlikely to play a significant role in mitigating emissions from coal-fired power stations,” authors including Ben Caldecott, director of the sustainable finance program at the University of Oxford’s Smith School of Enterprise and the Environment, wrote in a report published in January.

“Deployment of CCS has already been too slow to match” scenarios presented by the International Energy Agency and the Intergovernmental Panel on Climate Change, they warned.

Another concern is whether stored CO2 will leak from storage sites, releasing the gas back into the atmosphere.

“There is no guarantee that carbon dioxide can be stored in a stable way in Japan where there are many earthquakes and volcanic eruptions,” Kimiko Hirata, a researcher for Kiko Network, a Kyoto-based environmental group, told Bloomberg News.

In 2015, the FutureGen Alliance, a U.S. industrial group with a high-profile carbon capture project in Illinois, lost its Department of Energy financing.

FutureGen, a partnership between the U.S. government and an alliance of coal-related corporations, was retrofitting a coal-fired power plant with oxy-combustion generators. The excess CO2 would be piped 30 miles (48 km) to be stored in underground saline formations. Costs were estimated at US$1.65 billion, with $1 billion provided by the U.S. government.

But the U.S. Department of Energy ordered suspension of FutureGen 2.0 in February 2015, citing the alliance’s inability to raise much private funding. At the time of suspension the power plant part of the project had spent $116.5 million and the CCS part had spent $86 million.

In the UK, the British National Audit Office (NAO) has announced plans to investigate then-Chancellor of the Exchequer George Osborne’s 2015 decision to scrap a £1bn prototype carbon capture scheme that has already cost the taxpayers at least £60 million.

The spending watchdog said that this summer it will examine the expenses incurred in running, and then prematurely halting, a CCS competition for financing.

In the competition, the Department of Energy and Climate shortlisted two projects. Shell was developing a trial scheme at Peterhead in Scotland alongside one of the big six energy suppliers and power station owner SSE. A separate White Rose project was being developed by Drax at its coal-fired plant in Selby, North Yorkshire.

They were awarded multi-million pound contracts to finalize these proposals before a final investment decision could be taken.

But in November 2015 the agency withdrew funding for the program, suspending the competition.

The NAO will review the government decision, what impacts it will have on the department’s objectives of decarbonization and security of supply, and the costs incurred by government in running the competition.

“Only six months ago the government’s manifesto committed £1 billion of funding for CCS,” said Warren. “Moving the goalposts just at the time when a four year competition is about to conclude is an appalling way to do business.”

In February, the UK Parliament’s Energy and Climate Change Committee reported on the future of CCS in the country in view of the funding cut.

The government’s decision to pull funding for carbon capture and storage at the last minute will delay the development of the technology in the UK and could make it challenging for the UK to meet its climate change commitments agreed at the Paris COP21 summit, the Energy and Climate Change Committee report warned.

Said Angus MacNeil MP, Energy and Climate Change Committee Chair, “If we don’t invest in the infrastructure needed for carbon capture and storage technology now, it could be much more expensive to meet our climate change targets in the future. Gas-fired power stations pump out less carbon dioxide than ones burning coal, but they are still too polluting.”

“If the government is committed to the climate change pledges made in Paris, it cannot afford to sit back and simply wait and see if CCS will be deployed when it is needed,” said MacNeil. “Getting the infrastructure in place takes time and the government needs to ensure that we can start fitting gas fired power stations with carbon capture and storage technology in the 2020s.”