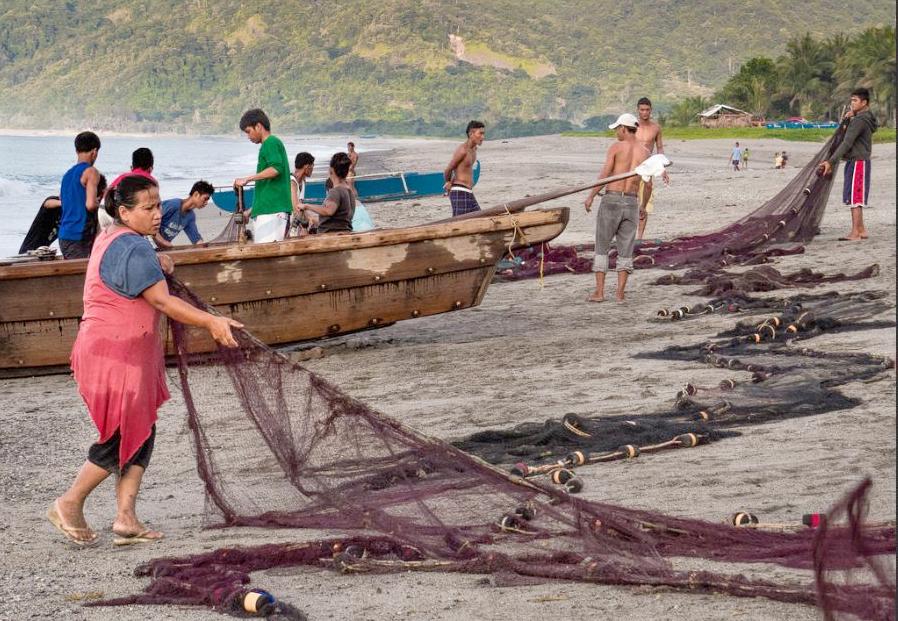 Members of a fishing village in Pagudpud, Philippines untangle and prepare their fishing nets for late evening fishing off shore to catch small tuna. May 2015 (Photo by Wayne S. Grazio) Creative Commons license via Flickr.

NEW YORK, New York, October 24, 2017 (Maximpact.com  News) – Standard ways of measuring community well-being and sustainability used by global organizations may be missing critical information that could lead to missteps in management actions, finds research that emerged this week from years of study and collaboration among people of many differing disciplines and cultures.

An international team of 40 scientists, policy-makers and on-the-ground practitioners published the paper  “Biocultural approaches to well-being and sustainability indicators across scales” October 23 in the journal “Nature Ecology & Evolution.”

The authors believe that the world views of local people should be the foundation of global and national approaches that address sustainability issues.

They say that “biocultural approaches” are critical to understanding social-ecological systems and the development of locally relevant sustainability indicators.

Biocultural, or ecocultural, approaches are those that start with and build on place-based cultural perspectives – encompassing indigenous values, knowledges, and needs – and recognize feedbacks between the state of the natural world and human well-being.

The authors say they recognize that choosing indicators of sustainability is a subjective process and that the decisions around which indicators are measured, and how they are measured, can impact management approaches and outcomes.

They suggest that evaluators add to the sustainability indicators already on their list standards that are grounded in the biocultural values of each unique community being evaluated.

“Well-being is a universally applicable concept, yet because it can mean so many different things to different people, pinning down an exact definition is difficult,” said lead author Eleanor Sterling, a conservation scientist at the Center for Biodiversity and Conservation in the American Museum of Natural History in New York.

“This paper is the result of years of collaboration among people from diverse disciplines and cultures to investigate methods and approaches to creating place-based indicators of well-being relevant for local communities,” said Sterling.

The research had its genesis in work the authors did in the Pacific. Scientists met with community members and local, regional, and national government experts to examine issues such as food security, access to fresh water, quality education, sustainable tourism, and protection of marine and terrestrial resources.

For instance, a common way to assess the sustainability of marine resources is to measure the extent of marine protected area (MPA) coverage.

But this metric ignores the appropriateness of the MPA’s location, design, or management effectiveness and may even exclude sustainably managed areas not formally considered as MPAs.

The authors suggest capturing these other crucial aspects of marine management, including customary and traditional management systems.

They cite a 2014 study about the experience of a Canadian First Nation, the Heiltsuk, in coastal British Columbia.

A collaborative team of Heiltsuk First Nation youth & leadership and scientists from elsewhere placed Heiltsuk observations of grizzly bear (Ursus arctos) in the context of Gvi’ilas – customary law in which bear behavior is recognized as a voice to guide decision-making about whole ecosystems.

In this project, the Heiltsuk framed the research questions that shaped the basic bear studies and led the partnership to carry out data collection and communicate the findings to the broader community.

The research relied both on population and landscape genetics and on Heiltsuk ways of knowing. As it was embedded in Heiltsuk governance structures, the research led to changes in bear management objectives, sanctions on trophy hunting and outlines for a multi-nation grizzly bear sanctuary under formal co-management frameworks.

Another example of the disconnect between locally appropriate indicators and those used by many large organizations is the issue of food security.

One way some global organizations assess food security is to interview community members with a series of standardized questions, which includes the following, “During the last 12 months, was there a time when your household ran out of food because of a lack of money or other resources?”

But the researchers found that questions about food security that are framed around vulnerability may be inappropriate and not generate accurate data due to a strong cultural reluctance to admit to food shortages because of deep obligation felt by some communities to share food with their families and guests.

More appropriate questions could focus on resilience, by looking at the percentage of households that report having a stable food supply throughout the year and the average length of time for which households in the community have an emergency food supply after a disaster.

Biodiversity International is one of the organizations that took part in the study. Since 2009, Bioversity International has been working in many countries to mainstream community-based biocultural landscape approaches, designing incentive schemes to conserve priority threatened species, while also supporting indigenous farmer livelihoods and existing community institutions of collective action.

“This paper distills our thinking around how to approach environmental challenges in a way that is responsible, effective, and ethical,” Sterling said.

“We discuss why inclusion of local peoples’ knowledges and myriad perspectives is crucial to developing appropriate indicators and management approaches for the intricately linked concepts of sustainability and well-being, and suggest ways to bridge between these locally derived solutions and broader scale efforts.”

The authors conclude that, “Global targets such as sustainability and well-being are best addressed through multi-level governance…” They argue that “biocultural approaches can create space for meaningful local metrics while supporting cross-scale application” from local to global.

They suggest that, “Future work could find ways to compare results from biocultural approaches to indicator development with those that did not include cultural aspects or feedbacks between humans and their environments, to see if outcomes differ.”

This work is supported by the National Science Foundation, the Gordon and Betty Moore Foundation, Lynette and Richard Jaffe, and the Jaffe Family Foundation.