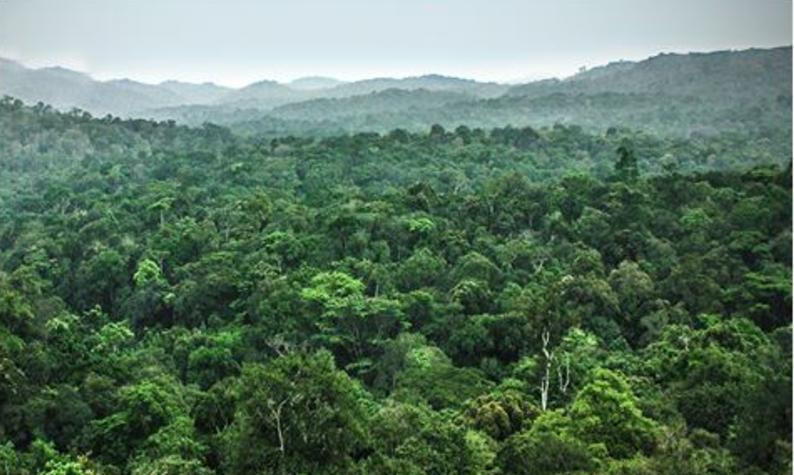 An intact portion of the world’s second largest rainforest, after the Amazon, is protected in Democratic Republic of Congo’s new Lomami National Park, part of which is in Tshuapa province. Date unknown (Photo courtesy Congo National Parks) Public domain.

LONDON, UK, March 21, 2019 (Maximpact.com  News) – Ten European Union traders in six EU Member States are importing timber from a logging company in Democratic Republic of Congo that has been penalized for ignoring forest and labor laws, a new report from Global Witness reveals, as the world celebrates the International Day of Forests.

While people who care about forests are taking part in tree plantings, symposiums, art exhibitions, photo competitions or student debates today for the International Day of Forests, others are logging primary rainforest as fast as they can, without regard for the law, the anti-corruption nonprofit reports.

Satellite analysis by Global Witness shows that Industrie Forestière du Congo (IFCO) has illegally logged outside of permitted boundaries, and documents that IFCO carried out extensive logging while its operations were supposed to be suspended by DRC provincial authorities. 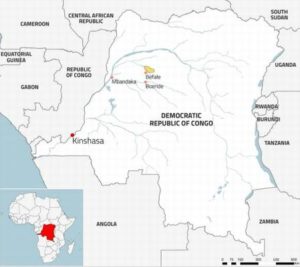 This map shows the location of IFCO’s Baulu concession in yellow and the DRC’s location in Africa. (Map courtesy Global Witness) Posted for media use.

The Congo Basin is the second largest tropical rainforest in the world, with almost two million square kilometers of humid forest – an area about the size of Mexico.

The Congo Basin is defined by the watershed of the Congo River, which flows through the Democratic Republic of Congo. The basin is inhabited by mountain gorillas, lowland gorillas, chimpanzees, and forest elephants, and 1,000 species of birds. The basin is also home to 75 million people and 150 distinct ethnic groups, many of whom still practice a traditional hunter-gatherer lifestyle, according to Yale University’s “Global Forest Atlas.“

The Congo Basin contains relatively intact forest, although both illegal and legal commercial logging, charcoal fuel wood harvesting, mining, and bush meat hunting are taking their toll on the forest.

As well as devastating climate-critical rainforests, this could be a direct breach of the European Union Timber Regulation (EUTR), a landmark piece of legislation that carries stiff penalties.

EUTR has been in effect since March 2013. It prohibits operators in Europe from placing illegally harvested timber and products derived from illegal timber on the EU market. Legal timber is defined as timber produced in compliance with the laws of the country where it is harvested.

Global Witness says that these 10 European traders, “who together have placed illegal or high-risk timber worth €2 million on the European market, should refrain from buying from IFCO while they investigate these apparent legal breaches.”

Global Witness campaigner Colin Robertson said, “It has been six years since the EU Timber Regulation came into force, and this is yet another case of illegal or high-risk timber coming into EU ports, seemingly unchecked by authorities.”

“Illegal logging is a serious contributor to climate change, and weak enforcement risks undermining the EU’s efforts to combat it,” Robertson said. “Companies also need to look much more seriously at their supply chains, and make sure that they are not dealing in illegally logged timber.”

IFCO is a recently created company that has inherited logging rights and operations belonging to Cotrefor, that Global Witness calls, “a notorious logging company accused of a series of illegal activities.”

IFCO directly controls two logging concessions in DRC. One of these is the Baulu concession that is examined in this report. The concession covers a total of 278,602 hectares, an area the size of Luxembourg in the remote DRC forest province of Tshuapa.

In February 2018, the Governor of Tshuapa province wrote a letter to the manager of IFCO’s logging concession in Baulu. The letter stated that the company’s operations were henceforth suspended because of a number of specific legal violations. The governor accused the company of behaving “as if they were in a conquered land.”

The concession has been exploited under three different company names over the last 10 years. Prior to being assigned to IFCO, it was held by Lebanese-owned companies called Cotrefor and, prior to that, Trans-M.

Throughout these changes the company’s operations and personnel, as well as its logging contracts and other official documents, appear to have remained largely unchanged, Global Witness says. “While the precise reason for these changes of company name is unclear, they have conveniently served to distance the company from past controversies over links to terrorist financing, as well as numerous allegations of illegal logging.”

Between 2005 and 2012, the Baulu concession was operated by the logging company Trans-M, which was part of the Lebanese-owned conglomerate Congo Futur.

In 2010 Congo Futur was placed on a terrorism sanctions list by the U.S. Treasury, as part of an effort to crack down on the financial networks of the Lebanese Shia militant group and political party Hezbollah.

A 2015 report by Greenpeace accused Cotrefor of “a shocking record of employee mistreatment, unpaid taxes, rampant irregularities in operational procedure with regards to felling trees and exceeding allocated quotas of endangered species.”

Independent Forest Monitors in DRC documented a range of legal breaches by Trans-M / Cotrefor between 2011 and 2017.

In 2016, Greenpeace initiated a court case in France in relation to several French timber traders who were importing Cotrefor timber from DRC. The case is focused on an alleged failure to comply with the EUTR and is ongoing. 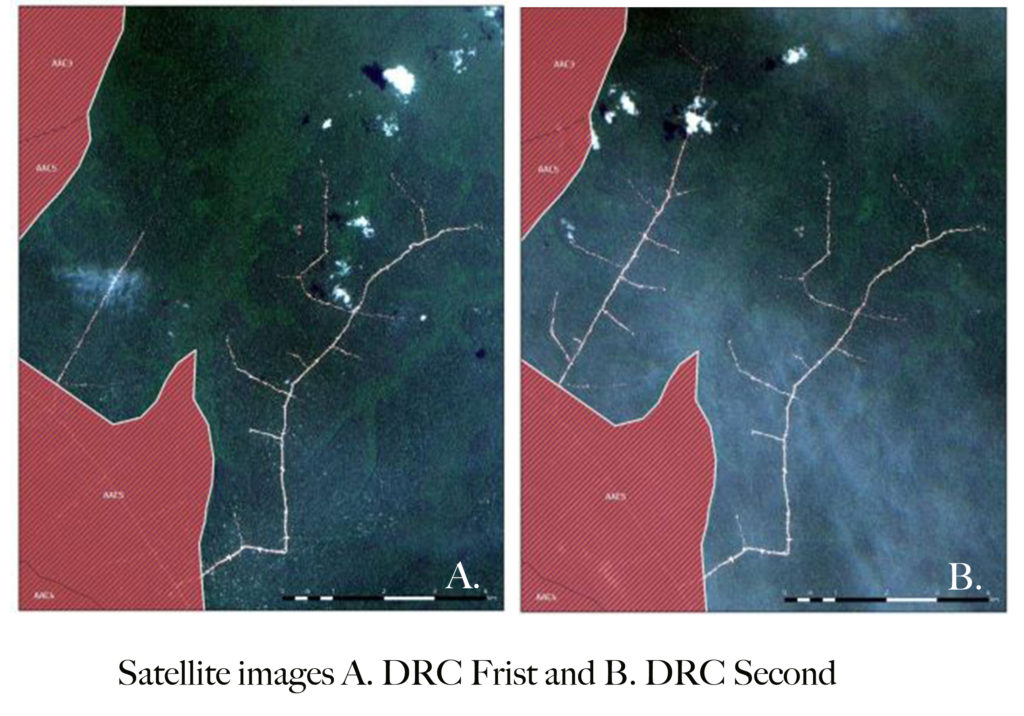 On its website IFCO presents a perfectly legal front, saying that on all of its forestry concessions in the Democratic Republic of Congo, IFCO is committed to:

But the Global Witness report documents how IFCO, the second biggest timber exporter in the DRC, has illegally logged outside of permitted boundaries and built logging roads during a time when the company’s activities were prohibited by DRC authorities.

Global Witness conducted a satellite analysis of the spread of logging roads in IFCO’s Baulu logging concession, to ascertain whether the annual harvest areas were being respected.

The analysis shows clearly that, during 2017, the company logged out of boundaries, creating logging roads that extended between five and 20 km into the forest outside of the permitted harvest area.

The analysis was based on Landsat and Sentinel satellite images, taken every few weeks depending on cloud cover. Logging roads can be seen clearly on these high resolution satellite images. The location of logging roads was checked against the approved annual harvest areas and five-year harvest blocs, to establish whether logging operations were being undertaken in the correct area.

Satellite images taken on October 22 and December 25, 2017 show that between these two dates, five km of logging roads were carved into the forest outside of the permitted harvest area for 2017. By January 10, 2018 these roads had been extended to more than 20 km.

During 2018 the company also carried out extensive logging while its operations were suspended by authorities for breaches of DRC’s labor and environmental laws, satellite images show.

Global Witness has documented how companies based in Belgium, France, Italy, Portugal, Poland and Spain have together placed over 1,400 m3 of IFCO’s high-risk timber, with a value of about €2 million, on the EU market in five months during 2018.

Under the EUTR, companies must be able to show they have taken clear steps to reduce the risk that timber imported to the EU has been illegally harvested.

Nine of IFCO’s European clients that are listed in the Global Witness report are named as:

In the 10th case, “significant shipments of IFCO timber to the Port of Valencia” in Spain took place in August 2018. These appear to have been facilitated by a Spanish timber agent. When contacted by Global Witness, the agent strongly denied being the importer of this timber. Global Witness is contacting authorities in Spain, requesting that they conduct an investigation.

In its report, Global Witness recommends that:

Nevertheless, in 2018 Greenpeace Africa and Congolese NGOs reported that a month after reinstating 650,000 hectares of logging concessions deemed illegal and cancelled in 2016, DRC’s Environment Minister Amy Ambatobe sought authorization from Prime Minister Bruno Tshibala to auction off 14 other concessions covering an area the size of Belgium. The move violates a DRC moratorium on new logging concessions put in place in 2002.

Greenpeace said then, “Proceeding with this plan will spell disaster for the world’s second largest rainforest and deepen the chaos of a logging sector which only benefits a few industrial loggers and Kinshasa elites at the expense of local and indigenous communities.”