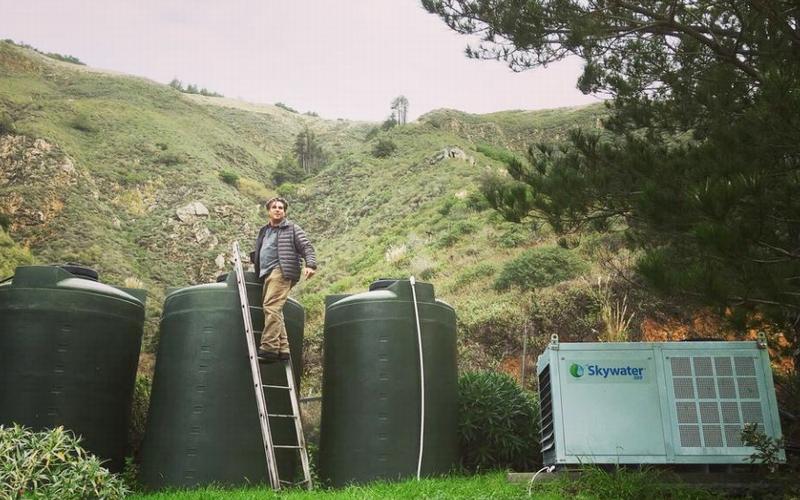 David Hertz harvesting water in Big Sur, California. Skywater 150 produces up to 150 gallons a day. The water can be stored in collection tanks for future use. 2018 (Photo courtesy Skysource/Skywater Alliance)

LOS ANGELES, California, October 25, 2018 (Maximpact.com News) – An atmospheric water generator that condenses moisture in the air, making fresh drinking water, has won the Water Abundance XPrize worth US$1.5 million. The prize went to David Hertz and Laura Doss-Hertz co-founders of the Skysource/Skywater Alliance , which produces the devices and runs one on solar power at its headquarters in Venice Beach, California.

The Water Abundance XPrize, sponsored by the Tata Group and Australian Aid, was launched in 2016 at the United Nations in New Delhi. The two-year competition was aimed at easing the global water crisis with energy-efficient technologies that harvest fresh water from the air.

To qualify for the Water Abundance XPRIZE, competitors had to extract over 2,000 liters of drinkable water from the atmosphere in a 24 hour period using only renewable resources, for less than two cents per liter.

Each Skywater model produces enough fresh water from air for a household use or emergency relief efforts, producing it “more efficiently than any other method of moisture extraction or filtration,” the company claims.

Richard Groden, president of Island Sky has been harvesting water from the air in Broward County, Florida since 2004.

“Water is a human right,” Groden has said. “There is an abundant, untapped source of clean drinking water in the air around us. Our technology provides a very comprehensive solution to the water crisis that will work as well in the developing world as it will in the technologically advanced areas.”

Skywater uses a patented distillation process, where water vapor is reduced to liquid without a gain or loss of heat. Refrigeration techniques maintain a dew point within a condensation chamber, maximizing water production from whatever the atmospheric condition exists.

The higher the humidity and temperature, the more water can be produced.

After condensation, the water is filtered and treated with ozone to enhance its taste and prevent potentially hazardous micro-organisms from forming. The water can be used or stored for future use.

The water is stored in a tank inside a shipping container and connected to a bottle refill station or tap.

Because the process uses so much electricity, the designers powered it with a biomass gassifier that burns wood chips, coconut shells, or whatever cheap biomass is locally available. That makes the system hot and humid, the ideal environment to run the air-to-water machine.

As it generates power, the system produces biochar, a charcoal that can be used to enrich soil.

“There’s no restrictions whatsoever on how it’s used,” Hertz, an architect, said of the $1.5 million in prize money. “But Laura and I have committed to using it all for the development and deployment of these machines, to get them to people who need the water most,” he told the Associated Press.

According to The United Nations World Water Development Report 2016, the world could face a 40 percent global water deficit by 2030. By 2025, an estimated 1.8 billion people will be living in areas with absolute water scarcity and two-thirds of the global population living in water-stressed conditions.

Zenia Tata, vice president of Global Impact Strategy at XPrize, is enthusiastic about relieving the thirsting millions who face water scarcity. “Water is our lifeblood. With alarming water shortages impacting livelihood around the world, we are in dire need of decentralized and democratized water breakthroughs now more than ever,” said Tata.

Water, Water Everywhere in the Air

While water may be increasingly scarce in many places on Earth, at any given moment, the atmosphere contains an astounding 37.5 million billion gallons of water, in the invisible vapor phase. This is enough water to cover the entire surface of the Earth, both land and ocean, with one inch of rain, say Steven Ackerman and Jonathan Martin, professors in the Department of Atmospheric and Oceanic Sciences at the University of Wisconsin, Madison.

Nature recycles this huge amount of water 40 times each year in an endless cycle of evaporation, condensation, and precipitation all over the planet, say Ackerman and Martin.

When it comes to drawing some of that water from the atmosphere, Skywater has many competitors in this fast-evolving field. The Water Abundance Xprize competition began with 98 teams from 27 countries. The five other finalist teams were:

JMCC WING from South Point, Big Island of Hawaii: Led by James McCanney, this team is powering the JMCC WING, LLC line of industrial atmospheric water generators with a high efficiency wind energy system, to extract water from the atmosphere. This team received a $150,000 XPrize to acknowledge the team’s ingenuity in developing a unique technological approach.

Hydro Harvest Operation of Newcastle, Australia: – Led by the University of Newcastle’s Professor Behdad Moghtaderi, the team developed a simple, energy-efficient and cost-effective device, giving communities worldwide the ability to harvest their own fresh water.

Skydra of Chicago, Illinois: Led by Jacques Laramie, Nathan Taylor, and Chris Wlezien, the team has employed a hybrid solution that utilizes both natural and engineered systems to condense water out of the air.

Uravu of Hyderabad, India: – Led by Swapnil Shrivastav, the team is developing a completely off-grid water from air device, spinning together the material sciences and solar thermal energy.

The Veragon & ThinAir Partnership of London, United Kingdom: Led by Laura Dean, the team has developed a partnership with the key objective of revolutionizing the capability of atmospheric water generators to deliver high quality, mineralized drinking water at the point of need, in an economically and environmentally sustainable manner.

The Water Abundance XPrize was awarded during Visioneering 2018, XPrize’s annual gathering of philanthropists and innovators to evaluate concepts for future competitions.

“This year’s Visioneering beautifully encapsulates the full life-cycle of an XPrize with the awarding of the Water Abundance XPrize, which began as a prize concept proposed at a Visioneering just five years earlier by our trustee, Eric Hirshberg,” said Dr. Peter Diamandis, XPrize founder and executive chairman.

“It is testament to the basic premise that Visioneering is the forum where participants’ breakthrough ideas are presented, evaluated, upvoted, funded and then go on to have real-world, transformative impact,” Diamandis explained.

In addition, attendees of Visioneering 2018 deemed a “Coral Survival” prize concept, whose development efforts were sponsored by Wendy Schmidt, as the top prize design. This prize design, once funded, will launch as a future XPrize competition.

This prize concept calls for innovations that can scale coral survival 1,000-fold, taking the survival rate of new coral larvae from one in a million, to one in a thousand, helping to replenish dying coral reefs.

Anousheh Ansari, XPrize chief executive officer, said, “What particularly resonated about the coral reef presentation is the urgency with which we need to address this important issue caused by climate change before it is too late. We are committed to finding the necessary funds to capitalize and launch this competition as soon as possible.”