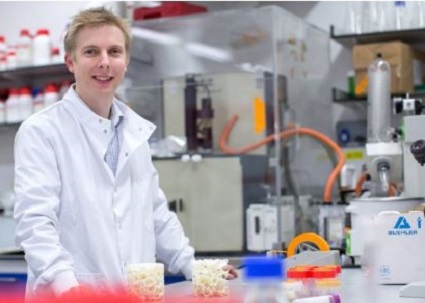 LONDON, UK, May 17, 2016 (Maximpact.com News) – Scientists have developed a new material that can mimic cartilage and potentially encourage it to re-grow.

Researchers from Imperial College London and the University of Milano-Bicocca have developed a bioglass material that mimics the shock-absorbing and load bearing qualities of real cartilage.

They are now hoping to use it to develop implants for replacing damaged cartilage discs between vertebrae.

They believe it also has the potential to encourage cartilage cells to grow in knees, which has not been possible with the methods in use today.

The new material also could help the millions who suffer from arthritis. The most common type of arthritis, osteoarthritis, involves wear-and-tear damage to cartilage — the hard, slick coating on the ends of bones.

“Bioglass has been around since the 1960s, originally developed around the time of the Vietnam War to help heal bones of veterans, which were damaged in conflict. Our research shows that a new flexible version of this material could be used as cartilage-like material,” said Professor Julian Jones, one of the developers of the bioglass from the Department of Materials at Imperial.

“Patients will readily attest to loss of mobility that is associated with degraded cartilage and the lengths they will go to try and alleviate often excruciating pain,” said Jones

“We still have a long way to go before this technology reaches patients,” he said, “but we’ve made some important steps in the right direction to move this technology towards the marketplace, which may ultimately provide relief to people around the world.”

The bioglass consists of silica and a plastic or polymer called polycaprolactone. It displays cartilage-like properties – it is flexible, strong, durable and resilient.

It can be made in a biodegradable ink form, enabling the researchers to 3D print it into structures that encourage cartilage cells in the knee to form and grow – a process that they have demonstrated in test tubes.

It also displays self-healing properties when it gets damaged, which could make it a more resilient and reliable implant, and easier to 3D print when it is in ink form.

One formulation developed by the team could provide an alternative treatment for patients who have damaged their intervertebral discs.

When cartilage degenerates in the spine it leaves patients with debilitating pain.

The scientists believe they will be able to engineer synthetic bioglass cartilage disc implants, that would have the same mechanical properties as real cartilage, but which would not need the metal and plastic devices that are currently available.

Another formulation could improve treatments for those with damaged cartilage in their knee, say the team. Surgeons can currently create scar-like tissue to repair damaged cartilage, but ultimately most patients have to have joint replacements, which reduces mobility.

When implanted, the combination of the structure, stiffness and chemistry of the bioglass would encourage cartilage cells to grow through microscopic pores. The idea is that over time the scaffold would degrade safely in the body, leaving new cartilage in its place that has similar mechanical properties to the original cartilage.

The researchers have received funding from the Engineering and Physical Sciences Research Council (EPSRC) to take their technology to the next stage.

They aim to conduct trials in the lab with the technology and develop a surgical method for inserting the implants. They will also work with a range of industrial partners to further develop the 3D manufacturing techniques.

Professor Justin Cobb, the Chair in Orthopaedic Surgery at Imperial’s Department of Medicine, will be co-leading on the next stage of the research.

Professor Cobb explained, “This novel formulation and method of manufacture will allow Julian and his team to develop the next generation of biomaterials. Today, the best performing artificial joints are more than a thousand times stiffer than normal cartilage. While they work very well, the promise of a novel class of bearing material that is close to nature and can be 3D printed is really exciting.”

“Using Julian’s technology platform we may be able to restore flexibility and comfort to stiff joints and spines without using stiff metal and all its associated problems,” said Cobb.

Professor Laura Cipolla, from the Department of Biotechnology and Biosciences at the University of Milano-Bicocca, explained some of the more technical aspects of the research. “Based on our background on the chemical modification of bio- and nanostructured materials, proteins, and carbohydrates,” she said, “we designed a new chemical approach in order to force the organic component polycaprolactone to stay together in a stable way with the inorganic component silica.”

The technology still has a number of regulatory hurdles to overcome before it reaches clinical applications for both applications. The team predicts it will take 10 years to for both technologies to reach the market. They have patented the technology with Imperial Innovations – the College’s technology commercialization partner.