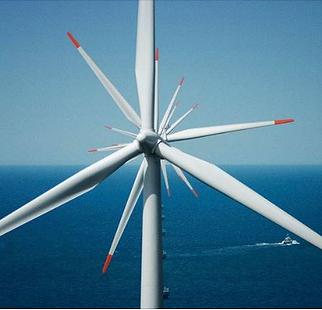 Anholt Offshore Wind Farm, a Danish offshore wind farm in the Kattegat, between Djursland and Anholt island began operating in 2013. With a capacity of 400 megawatts, it is one of the largest offshore wind farms in the world and was the largest in Denmark from 2013 to 2019. (Photo by Old Dane) August 15, 2013 Creative Commons license via Wikipedia

COPENHAGEN, Denmark, February 9, 2021 (Maximpact.com News) – Denmark, the EU’s largest oil producer, is taking a giant step towards total reliance on green electricity. A coalition of Danish parties announced this week that they will create the world’s first wind energy hub on a custom-built artificial island in the North Sea. Owned by a public-private partnership, the energy hub will collect electricity from offshore wind farms and distribute it to Danish households and to customer countries on the grid.

Denmark’s Ministry of Climate, Energy and Utilities says the US$34 billion hub, with an initial capacity of three gigawatts, will be built on an artificially constructed island 80 kilometers (50 miles) west of the coast of the Jutland peninsula, Denmark’s mainland region that separates the North and the Baltic seas. Around 200 offshore wind turbines are expected in the first phase of the project.

In the Baltic Sea, the Danish Island of Bornholm will be the physical hub for offshore wind farms with a total capacity of two gigawatts. Both energy islands will export power to the mainland of Denmark and neighboring countries.  Already, agreements have been signed for wind-generated energy to be provided to Germany, Belgium and the Netherlands, the BBC reports. 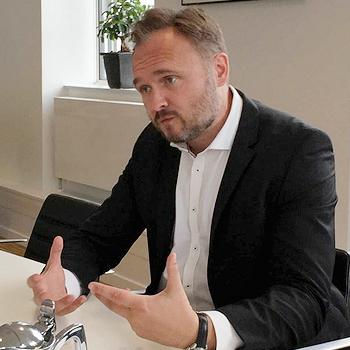 The two hubs’ initial capacity will be 5 GW, triple the current installed offshore capacity in Denmark. Later they will be expanded to provide a total capacity of 12 GW.  Scheduled for completion by 2030, the energy islands are expected to herald the beginning of a new era for future development of Danish offshore wind.

Denmark’s wind power generation is already the highest in the world as a fraction of domestic consumption, reaching 47 percent in 2019.

The abundance of offshore wind energy in the area can be used to produce climate-friendly fuels such as green hydrogen for shipping, aviation, heavy industries or heavy-duty vehicles. The energy hubs will allow the connection of offshore technical equipment for electricity generation, such as facilities for energy storage, hydrogen or electrolysis plants, and other technologies as needed.

”This is truly a great moment for Denmark and for the global green transition,” Danish Climate and Energy Minister Dan Jorgensen said of the new partnership. “This decision marks the start of a new era of sustainable energy production in Denmark and the world, and it links very ambitious climate goals with growth and green jobs.”

The artificial island is expected to have a total area of at least 120,000 square meters. Around 200 wind turbines are expected in the first phase of the project. In its first phase the project will be able to provide three million European households with green energy. Fully implemented, it can cover the consumption of 10 million European households, according to the ministry.

And Denmark needs all the renewable electricity she can get because the country’s entire economic basis is changing – moving away from fossil fuels and towards renewables on a industrial scale. Last December, Denmark’s parliament voted to phase out North Sea oil and gas production by 2050 and canceled all future licensing rounds.

Denmark is currently the largest oil producer in the European Union, and it is the biggest producer worldwide to establish a final fossil fuel phase-out date so far.

The deal also laid out plans for a just transition of the affected workers. While the redundant fossil fuel workers will be let go closer to the phase-out date, still 30 years away, the construction industry will boom in the very near future to meet the needs of the artificial island’s builders.

“The energy hub in the North Sea will be the largest construction project in Danish history,” Jorgensen said. “It will make a big contribution to the realization of the enormous potential for European offshore wind, and I am excited for our future collaboration with other European countries.”

Denmark has a long history as a leader in offshore wind and in 1991 established the first offshore wind farm in the world. This new project will be a public private partnership between the Danish state and private companies. The state will own the majority of the island, but private companies will be crucial for the project to fulfill the potential as regards to innovation, flexibility, cost-effectiveness and business potentials.

Denmark’s wind energy hub is one of the government’s flagship projects for the green transition in Europe now underway. The hub is expected to strengthen the integration of Europe’s power grids and increase the flow of renewable electricity necessary for a climate neutral Europe.