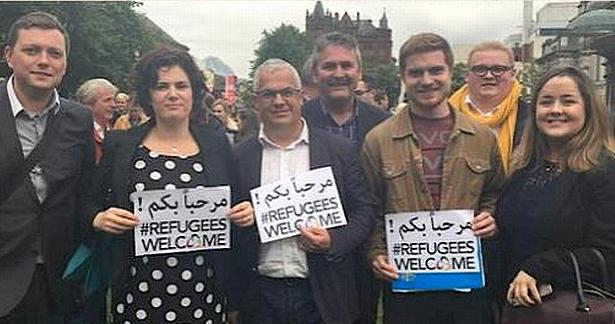 Members of the Social Democratic and Labour Party (SDLP), a social-democratic, Irish nationalist political party in Northern Ireland, stage a rally to support Syrian refugees in Belfast. September 7, 2015. (Photo by SDLP) Posted for media use

BELFAST, Northern Ireland, September 5, 2019 (Maximpact.com News) – A teenage refugee who fled war-ravaged Syria for a new life in Belfast has won a top UK achievement award for young people. Aisha Al Najjar and her family left their home in Syria in 2012 and lived in Beirut before landing in Northern Ireland in December 2015 under the Relocation of Vulnerable People Scheme.

A Malone Integrated College student, Al Najjar earned a 2018 Bardnardo’s UK Young Achiever of the Year Award. These awards recognise children and young people who have overcome great odds, never given up in the face of adversity and have had a positive impact on other young people. 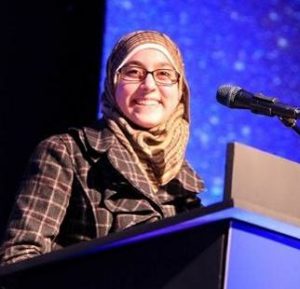 Teenager Aisha Al Najjar fled her home in Syria to escape the country’s civil war and gained so much wisdom that she was awarded a 2018 Bardnardo’s UK Young Achiever of the Year Award. These awards recognise young people who overcome great odds, never give up in the face of adversity and have a positive impact on other young people. February 5, 2018 (Photo courtesy 5Pillars) Posted for media use

The award was given in recognition of Al Najjar’s academic achievements, her strength of character and the positive impact she has on other young girls arriving in Northern Ireland through the Relocation of Vulnerable Persons Scheme and the encouragement she gives them to achieve their goals.

In Northern Ireland, an average of 1,600 Syrian refugees are being welcomed into the population of 380,000 with offers of friendship and inclusion, rather than suspicion and withdrawal.

Syria’s civil war, which began in 2011, has forced millions of Syrians to flee their homes. The UK Government agreed in 2015 to receive up to 20,000 Syrian refugees directly from refugee camps in countries neighbouring Syria over a period of five years. They are being brought through the Syrian Vulnerable Persons Relocation Scheme  run by the UK Home Office, and are being settled across the UK, including in Northern Ireland.

Northern Ireland has been working to welcome Syrian refugees, who come directly from refugee camps in countries around Syria.

“We’re having different conversations about immigration, race and community. They are successful, and fun, and they could change the world,” wrote Stephanie Mitchell, a co-founder of the Belfast Friendship Club and a research fellow at Queen’s University Belfast, on August 29, 2018 on the Open Democracy website.

This welcoming attitude has its roots in recent violence. In 2004, Belfast was shocked by unprovoked racist attacks on its Filipino community, many of whom worked in the city’s hospitals. Then, misinformation about immigration, sensationalized by tabloid newspapers, was prevalent. To many Belfast residents still recovering from decades of Ireland’s civil conflict, mistrust of minorities was common.

“In response to these divisions, a large group of civil society organisations and charities gradually came together and, in 2009, started the Belfast Friendship Club, a safe space for people to meet and build relationships. It was aimed, primarily, at anyone new to the city for any reason, but also welcomed locals who now make up almost a quarter of the membership. And it has flourished ever since,” Mitchell wrote.

Now, Belfast has become a City of Sanctuary and wishes to re-imagine Belfast as a welcoming, safe and inclusive city. Belfast City of Sanctuary (BCoS) was launched at Belfast City Hall in March 2018. A new committee, comprising 10 individuals, was formed, including 50 percent representation from refugees and asylum seekers. A constitution was put in place and a working plan presented for the months ahead. People were invited to become members.

“When people flee persecution, the flight to safety is only the first part of their journey. The second stage – rebuilding life in a strange land – is equally important. Sometimes settling here can be as hard or harder than the original flight from tyranny. Integration is not about ‘fitting in,’ or about refugees becoming ‘more like us.’ It is, rather, about equality and inclusion, and ensuring that refugees have equal chances to live full, safe and productive lives,” said Donna Covey, OBE, Refugee Council, the UK’s leading charity working with refugees and asylum seekers.

Embrace, for instance, is a group of Christians working together to promote a positive response to people who are seeking asylum, refugees, migrant workers and people from minority ethnic backgrounds living in Northern Ireland. The group’s primary role is to resource churches through information and training so that they can help make Belfast a more welcoming place for migrant and minority ethnic people.

Bryson Intercultural is the lead partner in the Vulnerable Syrian Refugee consortium, established to support the Syrian refugees arriving here.

Anti-refugee protests have been staged in Belfast, but they have been few and far between and poorly attended.

Now the Syrian Vulnerable Persons Relocation Scheme is about to end, but the UK in general, and Northern Ireland in particular, are not abandoning their refugees.

The UN Refugee Agency (UNHCR) has warmly welcomed the UK’s pledge to resettle significant numbers of the world’s refugees after its Syria-focused programme expires next year.

“At the start of Refugee Week, this is a strong signal of international support for refugees and it places the UK among the leading countries for resettlement,” said Rossella Pagliuchi-Lor, UK representative for UNHCR. “It also makes sense to offer a consolidated, flexible programme that responds to where needs are greatest. UNHCR hopes that significant numbers will be welcomed by the UK beyond 2021.”

Resettlement involves the relocation of refugees from a country of asylum to a country that has agreed to admit them and ultimately grant them permanent settlement. VPRS, the largest UK scheme, is on track to fulfil its commitment to resettle 20,000 refugees affected by the Syrian conflict between 2015 and 2020. It has been a lifeline for refugees fleeing that conflict, offering a chance to rebuild their lives in a new society.

UNHCR will continue to identify refugees facing protection risks around the world for the UK’s new programme.

“Resettlement is a life-changing experience. It is both challenging and rewarding,” Pagliuchi-Lor said. “Bringing refugees to safety is only part of the story. Helping them to embrace their new home and contribute meaningfully to their new society is the next stage. It is also important to recognise the huge contribution of local authorities, service providers and civil society in making the UK resettlement programme a success.”

UNHCR also welcomed UK plans to create a new process for emergency resettlement, allowing the UK to respond quickly when there is a heightened need for protection and where lives are at risk.

A Community Sponsorship scheme, which currently enables community groups to directly support refugees in the UK, will continue. UNHCR judges the programme, still in an early phase, to be a success and encourages the UK to welcome more refugees via community sponsorship and in addition to the existing commitments.

Resettlement is available only to a fraction of the world’s refugees. Typically, less than one percent of the refugees worldwide are ever resettled.

In 2019, the UNHCR estimates that 1.4 million refugees who are currently residing in 65 refugee hosting countries worldwide, will need resettlement. UNHCR is collaborating with governments and partners to develop a strategy on Resettlement and Complementary Pathways to help increase the pool of resettlement places, encourage more countries to participate in global resettlement efforts, and increase access to complementary pathways for refugees.

The UK announcement comes as states and international actors focus on the Global Compact on Refugees. This non-binding international agreement provides a blueprint for governments, international organizations and other stakeholders including the private sector to ensure that host communities obtain the support they need and that refugees can lead productive and independent lives in exile, or return home in dignity once it is safe to do so. The Compact calls on States to offer more resettlement places, through existing programmes or by establishing new ones.

Most recently, a pilot to encourage refugee entrepreneur programmes across the UK was launched with the Centre for Entrepreneurs (CFE) with funding from the Home Office and The National Lottery Community Fund, the Immigration Minister announced July 21.

The one-year pilot jointly funded by the Home Office and The National Lottery Community Fund, will identify established local business support organisations to deliver tailored start-up programmes that will take entrepreneurial refugees from the idea stage to business launch.

Immigration minister Caroline Nokes said, “The UK has a proud history of providing protection to those that need it and we are committed to making sure that refugees can successfully integrate to life in the UK. This exciting new programme gives refugees the opportunity to build businesses, leading to further independence as they rebuild their lives in the UK. We will continue to collaborate with civil society and businesses to ensure that we deliver the best possible support to those who choose to make this country their home.”