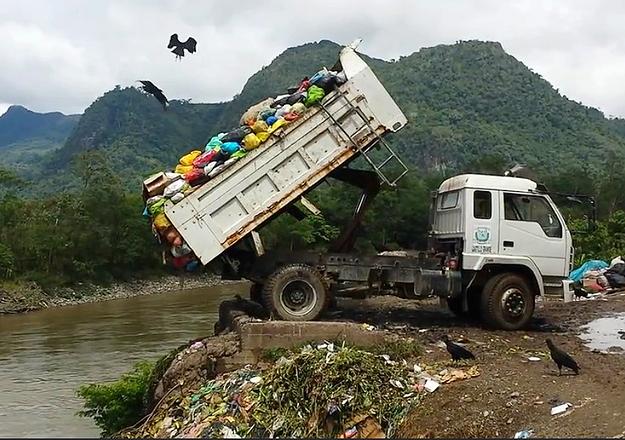 Dropping ramp to dump garbage and trash directly into en:Huallaga River in Peru.

GENEVA, Switzerland, February 16, 2022 (Maximpact.com Sustainability News) – Medical waste from the coronavirus pandemic is accumulating around the world, threatening human and environmental health, revealing the need to improve waste management, and accelerating planning for a global treaty on plastics.

In a new report published February 1, the head of the World Health Organization Dr. Tedros Adhanom Ghebreyesus addressed the mounting problem of medical waste as he marked two years since he first declared a public health emergency of international concern – the highest level of alarm under international law – over the spread of COVID-19.

“At the time,” he said, “there were fewer than 100 cases and no deaths reported outside China. Two years later, more than 370 million cases have been reported, and more than 5.6 million deaths – and we know these numbers are an underestimate.”

Dr. Tedros said, “Health workers and members of the public rely on huge amounts of personal protective equipment, tests, chemicals, syringes, needles, and other disposable products to protect ourselves and others. But after we have used it, most of it ends up as waste.”

Dr. Tedros views the report as “a reminder that although the pandemic is the most severe health crisis in a century, it is connected with many other challenges that countries face.”

The report makes a set of recommendations, including using eco-friendly packaging and shipping, safe and reusable gloves and medical masks, recyclable or biodegradable materials, and cleaner waste treatment technologies and recycling.

WHO’s Member States have asked the organization to develop a set of proposals on strengthening the global health architecture for emergency preparedness, response and resilience, to present to the World Health Assembly in May, and work on those proposals is underway, Dr. Tedros said.

The report, “WHO Global analysis of health care waste in the context of COVID-19: status, impacts and recommendations,” bases its estimates on the 87,000 tonnes of personal protective equipment (PPE) that was procured between March 2020- November 2021 and shipped to support countries’ urgent COVID-19 response needs through a joint UN emergency initiative. Most of this equipment is expected to have ended up as waste.

The authors say this provides an initial indication of the scale of the COVID-19 waste problem, although it does not take into account any of the COVID-19 commodities procured outside of the initiative, nor waste generated by the public like disposable medical masks.

They point out that over 140 million test kits, with a potential to generate 2,600 tonnes of non-infectious waste, mainly plastic, and 731,000 litres of chemical waste have been shipped, while over eight billion doses of vaccine have been administered globally, producing 144,000 tonnes of additional waste in the form of syringes, needles, and safety boxes.

A Recycling Solution From the Lab

Engineers at Cornell University in Ithaca, New York have just published a solution to sustainably deal with the discarded material. 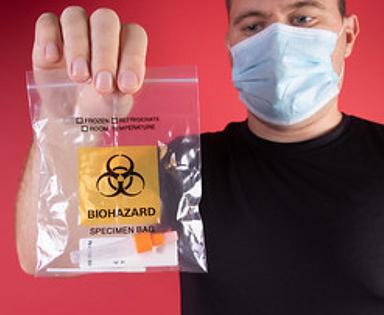 A medium-temperature reaction called pyrolysis can reduce the plasticized medical-protection garb back into an original form – such as chemicals and petroleum – and then recycle it, perhaps into fuels, according to the new study.

The method involves no incineration or landfill use.

Xiang Zhao, a doctoral student, working with his advisor Fengqi You, a professor in energy systems engineering, published the proposed technology framework https://www.sciencedirect.com/science/article/pii/S1364032121010558 in the journal “Renewable and Sustainable Energy Reviews.”

Their framework, first focusing on New York State where Cornell is located, proposes collecting waste PPE from hospitals and medical centers, and then sending it to pre-processing and decontamination facilities in New York or Suffolk counties.

There, it would be shredded, sterilized and dehydrated to become small particles, and then brought to an integrated pyrolysis plant, like one planned for a location north of New York City.

In the case of You and Zhao’s model, the medium-temperature pyrolysis – about 1,200 degrees Fahrenheit – can deconstruct the plasticized gowns and gloves, which are derived from petroleum, into chemicals such as ethylene, butane, gasoline, bauxite, propene, propane, diesel, light naphtha and sulphur.

“For an analogy, pyrolysis is similar to baking in an oven,” said You, a senior faculty fellow at the Cornell Atkinson Center for Sustainability. “If you set the oven temperature very high, your meat becomes a chunk and charcoal. But if you use a lower oven temperature, the meat is going to be juicy. In pyrolysis, the temperature is the trick.”

Health care facilities around the world are creating about 7.5 pounds per person of PPE waste daily through COVID-19-associated services, according to the United Nations Environment Programme, UNEP.

To get a sense of the enormity of the disposal dilemma, one hospital with 300 medical personnel could generate more than a ton of medical garb waste daily. That translates to more than 400 tons of annual medical PPE waste in a single COVID-handling facility, You said.

In the paper’s energy analysis and environmental lifecycle assessment, the proposed optimal PPE processing system avoids 41.52 percent of total landfilling and 47.64 percent of the incineration processes.

This method shows an environmental advantage by reducing total greenhouse gas emissions by 35.42 percent emissions from conventional incineration and energy saving by 43.5 percent from landfilling, the researchers said.

“This is a viable strategy for disposing and processing waste PPE,” You said. “It is a treatment method with low greenhouse gas emissions, it alleviates fossil fuel emission depletion and it saves a lot of polluting material from landfills.”

A Global Agreement to Set a Stamdard

At the end of February, the United Nations Environment Assembly (UNEA) will tackle a challenging task – the creation of a landmark treaty to control plastic pollution worldwide.

The Assembly will take place online and in-person in Nairobi, Kenya from February 28 – March 2 under the theme “Strengthening Actions for Nature to Achieve the Sustainable Development Goals.

Norway currently holds the Presidency of UNEA. Espen Barth Eide, the current Norwegian Minister of Climate and Environment, tweeted that he is very much looking forward to working with UNEP and its Executive Director Inger Andersen of Denmark “on key environmental challenges, including initiating negotiations towards a strong global treaty to fight plastic pollution.”

The U.S. Secretary of State Antony Blinken says the Biden Administration will support a global treaty to tackle plastic pollution.

“Our goal is to create a tool that we can use to protect our oceans and all the life that they sustain from growing global harms of plastic pollution,” Blinken said while visiting UNEP headquarters in Nairobi in November.

The United States opposed such a treaty during the Trump Administration.

On February 11, the governments of the United States and France released a joint statement in support of a global agreement to curb plastic pollution.

Joshua Baca, the American Chemistry Council’s vice president of plastics, said, “America’s plastic makers fully support a resolution at the upcoming UN Environment Assembly to begin negotiations on a legally binding global agreement to curb plastic waste in the environment. We believe such an agreement will accelerate progress towards a circular economy most effectively through binding and non-binding commitments.”

“Most importantly,” Baca said, “plastic waste should never end up in our environment.”