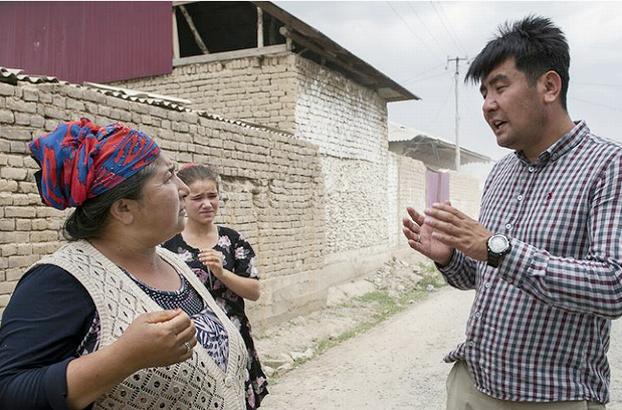 Tenacious Kyrgyz lawyer and statelessness champion, Azizbek Ashurov, took to horseback to help more than 10,000 stateless people gain nationality in Kyrgystan after the break-up of the Soviet Union. He has been awarded the UN refugee agency’s prestigious 2019 Nansen Refugee Award. Here, he talks with two Kyrgyz women. 2019 (Photo courtesy United Nations) Posted for media use 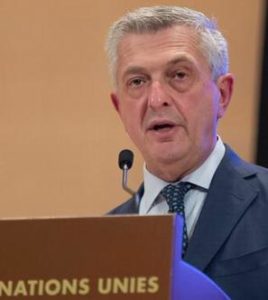 Speaking at the annual UNHCR Executive Committee meeting in Geneva with the idea of convincing more countries to assist the many millions around the world who live in stateless limbo, Grandi said that much more action is needed, now, five years after the UNHCR launched its #IBelong campaign to end statelessness.

“As recently as five years ago, public awareness of statelessness, and the harm it causes, was still negligible. That is changing, and today the prospect of ending statelessness entirely has never been closer,” said Grandi.

“And yet progress is far from assured,” he said. “Damaging forms of nationalism, and the manipulation of anti-refugee and migrant sentiment – these are powerful currents internationally that risk putting progress into reverse. Solutions are urgently needed for millions without citizenship or at risk of statelessness around the world – including Myanmar’s Rohingya, and minority populations at risk of statelessness in India’s Assam. Without these, we risk a deepening of the exclusion that already affects the lives of millions of people.”

At least 10 million people worldwide are currently stateless and a child is born stateless every 10 minutes, according to the UNHCR.

“The biggest problem is the poverty caused by my statelessness. A stateless person cannot own property. I feel belittled and disgraced by the situation that I am in,” says Shaame Hamisi, 55, of the Pemba community in Kenya.

To date, around 200 countries have pledged to work with UNHCR on solutions to statelessness, which the UN agency aims to eradicate by 2024.

A “bigger, broader” international response is needed to tackle global forced displacement in a world in which new challenges are emerging, Grandi told the UNHCR Executive Committee meeting.

He’s uniquely qualified through his years of work with displaced people in many countries. Born in Milan, Italy, in 1988 Grandi began his career in the office of the 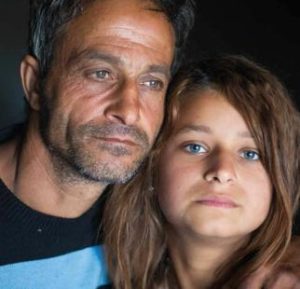 Stateless father Mivtar Rustemov, 48, and his daughter Lirije Rustemov, 13, in the city of Skopje, capital of the Former Yugoslav Republic of Macedonia, now known as North Macedonia. 2017 (Photo courtesy UNHCR) Posted for media use

UN High Commissioner for Refugees (UNHCR), the agency he leads today. He has served in Sudan, Syria, Turkey, and Iraq after the first Gulf War and has headed emergency operations in Kenya, Benin, Ghana, Liberia, the Great Lakes Region of Central Africa, Yemen and Afghanistan. From 2005 to 2014 he served in the UN Relief and Works Agency for Palestine Refugees in the Near East, rising to lead the agency.

In the lead-up to the High-Level Segment on Statelessness held October 7 as part of UNHCR’s Executive Committee meeting, national and regional preparatory meetings were organized to support States in communicating their achievements and preparing pledges.

The purpose of the High-Level Segment on Statelessness, convened at the five-year mid-point of the #IBelong campaign, was to assess achievements to date, showcase good practices, and encourage concrete pledges by States and – regional organizations, international organizations, the private sector, and civil society, to take action to address statelessness in the remaining five years of the campaign.

In the first five years of the #IBelong campaign, more than 220,000 stateless people acquired a nationality, including as a result of concerted national efforts that have been motivated by the campaign in places as diverse as Kyrgyzstan and Kenya, Tajikistan and Thailand.

Head of the U.S. delegation to the Executive Committee meeting, Carol Thompson O’Connell, acting assistant secretary of state for population, refugees and migration, told the delegates, “We can get to zero stateless persons globally, but only if Member States take bold steps and avoid creating new situations of statelessness.”

O’Connell emphasized that the United States “remains committed to leading the world in humanitarian assistance. In Fiscal Year 2019, the USA provided nearly $1.7 billion to UNHCR. “But,” she said, “we also remain committed to promoting burden sharing with our partners and allies, and ensuring greater efficiency, transparency, accountability, and effectiveness of our humanitarian assistance.”

In July of this year Kyrgyzstan became the first country in the world to announce the complete resolution of all known cases of statelessness.

Azizbek Ashurov, a lawyer who spent over a decade championing the rights of more than 10,000 stateless people in the Kyrgyz Republic, accepted the 2019 Nansen Refugee Award at a special ceremony in Geneva on October 7, calling the prize “a symbol of hope” for millions without citizenship worldwide.

Ashurov was chosen for his outstanding 16-year commitment to ending statelessness in Kyrgyzstan, ensuring that those left stateless by the breakup of the former Soviet Union finally have citizenship.

“His commitment to the cause of eradicating statelessness in Kyrgyzstan – an achievement secured in partnership with the Kyrgyz government and others across the country – is a compelling example of the power of an individual to inspire and mobilize collective action,” said Grandi.

Ashurov runs Ferghana Valley Lawyers Without Borders, an organization first established in 2003 to offer free legal advice. It began tackling statelessness in 2007. In 2014, funding from UNHCR helped to set up mobile legal clinics and map the problem.

A team of lawyers worked tirelessly, juggling up to 10 cases a day. Together, they searched the Central Asian country to find people living deep in the shadows without papers. In July, the last people without documents in Kyrgyzstan finally received citizenship.

“It is hard for me to describe how proud I am right now – and hard to describe the great responsibility I feel,” Ashurov told the audience after receiving the award. “My young independent nation is facing many challenges. But it still found the political will to end statelessness.”

“The difficult takes a little time,” Ashurov said, quoting the Norwegian explorer Fridtjof Nansen, for whom the award is named. “The impossible takes a little longer. This year’s Nansen Award … shows to the stateless people all over the world that their voices are heard. For them, this award is a symbol of hope.” 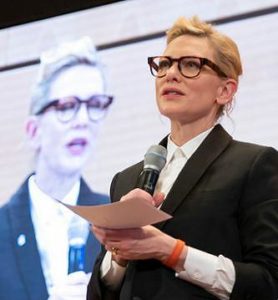 Born in Ivanhoe, Australia, Blanchett, an actor and rights activist, has been honored with two Academy Awards, three Golden Globe Awards, and three awards from the British Academy of Film and Television Arts. In 2018, she was ranked among the highest-paid actresses in the world.

Spotlighting the kinds of problems that statelessness brings, Blanchett said the stateless are denied access to things every day that those with a nationality take for granted, such as education, health care and travel, or just opening a bank account.

Recalling the plight of a young Lebanese girl who had been left stateless because her Lebanese mother could not transfer her own nationality to her daughter under Lebanon’s laws, while her father came from an unrecognized minority, Blanchett described the situation as “heart-breaking, inhumane and devastating.”

She said, “Even at the age of nine, her hopes of becoming what she called ‘a baby doctor’ were becoming dimmer and dimmer, because the prospect of her going to high school were very slender. And as a parent, I could also relate to her parents’ anguish and guilt, and their sense of powerlessness at being unable to change that situation.”

Insisting that the world “can end statelessness,” Blanchett pointed out that there are relatively straightforward fixes to it, such as legislative changes to remove the gender discrimination laws like those suffered by the young girl from Lebanon.

Two countries, Madagascar and Sierra Leone, have recently reformed their nationality laws to allow mothers to confer citizenship on their children on an equal footing with fathers. However, 25 countries continue to make it difficult or impossible for mothers to confer citizenship on their children, one of the leading causes of statelessness. Still, said Blanchett said, the actions of the two countries demonstrates that governments “have the power to remove those roadblocks” for stateless people.

As not all nationality laws contain safeguards that ensure that no child is born stateless, statelessness can be passed down from generation to generation.

Turning to the refugee crisis in southern Bangladesh, where around a million Rohingya refugees are sheltering, most after fleeing Myanmar amid a military crackdown and grave human rights abuses, Blanchett explained that the problem had been decades in the making.

“The scale of the problem caused by the stateless of the Rohingya people is overwhelming,” she said. “I think we should learn as a species from the enormity of this problem,” and what begins on a local level can go on “decade after decade after decade and it becomes a problem beyond that county’s borders and it becomes an international crisis. So let’s not let other issues of statelessness rise to the level of the Rohingya.” 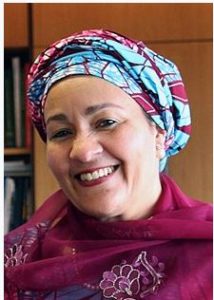 These issues were the target of the 2030 Agenda for Sustainable Development, she said, pointing to their focus on enabling marginalized populations “to contribute to, and benefit from, inclusion in sustainable social and economic development processes.”

At the same time, Mohammed explained, refugee host countries “require tangible support, including from a development perspective, to be able to cope with large-scale influxes and protracted refugee situations.”

There were 83 States party to the 1954 Convention in November 2014 when teams at UNHCR launched the Campaign to End Statelessness in 10 Years.

There were 61 States party to the 1961 Convention in November 2014 when teams at UNHCR launched the Campaign to End Statelessness in 10 Years.

To find out how you can make a difference to the lives of people without citizenship, click here join the UNHCR’s #IBelong Campaign to End Statelessness in 10 years.