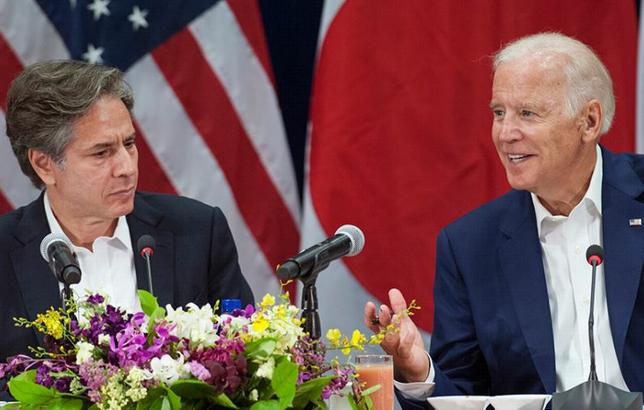 WASHINGTON, DC, February 7, 2021 (Maximpact.com News) – “We face a crisis of more than 80 million displaced people suffering all around the world,” President Joe Biden told diplomats at the U.S. State Department Friday, setting the stage for an about-face on U.S. refugee policy in the third week of his term. While the previous administration imposed travel bans, separated families and built border walls to keep refugees and migrants out, Biden signed an executive order “to begin the hard work of restoring our refugee admissions program to help meet the unprecedented global need.”

The executive order will position the United States to raise the refugee admissions up to 125,000 persons for the first full fiscal year of the Biden-Harris administration starting October 1, an increase of 15,000 over the limit set by the Obama-Biden administration, 2009-2017.

Former President Donald Trump had cut the refugee admissions cap to only 15,000 people a year.

“The United States’ moral leadership on refugee issues was a point of bipartisan consensus for so many decades when I first got here,” said Biden, who first came to Washington in 1973 as the junior U.S. senator from the state of Delaware. “We shined the light of liberty on oppressed people,” he said. “We offered safe havens for those fleeing violence or persecution. And our example pushed other nations to open wide their doors as well.”

“It’s going to take time to rebuild what has been so badly damaged, but that’s precisely what we’re going to do,” Biden said.

Introducing his newly confirmed Secretary of State Tony Blinken, with whom he has worked for over 20 years, Biden said his message to the world is, “America is back. Diplomacy is back at the center of our foreign policy. As I said in my inaugural address, we will repair our alliances and engage with the world once again, not to meet yesterday’s challenges, but today’s and tomorrow’s.”

“We must start with diplomacy rooted in America’s most cherished democratic values: defending freedom, championing opportunity, upholding universal rights, respecting the rule of law, and treating every person with dignity,” said the new president, rousing hopes of fair treatment for refugees.

President Biden announced that his administration is stepping up U.S. diplomacy to end the war in Yemen, a small country in the south of the Arabian Peninsula on the Gulf of Aden. The Saudi-led war in Yemen has created what the president called “a humanitarian and strategic catastrophe.”

This morning, Secretary Blinken appointed Tim Lenderking, a career foreign policy officer, as the U.S. special envoy to the Yemen conflict. He will work towards a diplomatic resolution with Martin Griffiths, the special envoy of the UN Secretary-General for Yemen, and all parties involved in the conflict.

Diplomacy will be bolstered by USAID, working to ensure that humanitarian aid is reaching the Yemeni people who are suffering unendurable devastation. “This war has to end,” declared Biden.

And to underscore our commitment, President Biden said, “we are ending all American support for offensive operations in the war in Yemen, including relevant arms sales.”

At the same time, Biden said, “Saudi Arabia faces missile attacks, UAV strikes, and other threats from Iranian-supplied forces in multiple countries. We’re going to continue to support and help Saudi Arabia defend its sovereignty and its territorial integrity and its people.”

This attitude is an about-face from that of the Trump administration, which on January 10, just days before Trump left office, designated Ansar Allah, as the Houthis are formally known, as a foreign terrorist organization. UN authorities warned at the time that the move would impact the humanitarian situation in Yemen, particularly the risk of famine.

Briefing the UN Security Council January 14 on humanitarian situation in Yemen, UN Emergency Relief Coordinator Mark Lowcock warned that the likely humanitarian impact of the designation will be a “a large-scale famine on a scale that we have not seen for nearly 40 years.”

“The data show that 16 million people will go hungry this year. Already, about 50,000 people are essentially starving to death in what is essentially a small famine. Another five million are just one step behind them,” Lowcock told the Security Council. “Every decision the world makes right now must take this into account.”

“Preventing famine remains the top priority right now. To do so, we need to increase humanitarian funding, support the economy, and push for an end to the violence,” Lowcock said.

“Most of the time, we only eat once a day,” says Mariam, 50, who fled with her family from their home in Sa’ada, northwestern Yemen, after the conflict started in 2015. She now fights for survival alongside 136 other families on a site hosting displaced Yeminis north of the capital Sana’a. 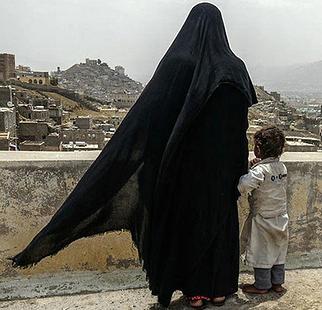 An internally displaced Yemeni woman and her daughter look over the capital city of Sana’a, Yemen. August 2017 (Photo by Giles Clarke courtesy UN Office for the Coordination of Humanitarian Affairs) Posted for media use

A widow with six children of her own, Mariam adopted seven of her nieces and nephews after her brother and his wife were killed in the bombing that forced her to leave home. Undernourished and gaunt, she must now feed and take care of 13 children on her own. “At night it gets very cold, but we don’t have a blanket for everyone, so one blanket is shared by three,” Mariam told the UN High Commission for Refugees.

Yemeni Foreign Minister Riad Yassin today revealed that more than one million Yemeni nationals have sought refuge in Saudi Arabia since the Houthi coup began in August 2014. The Houthi takeover in Yemen, also known as the September 21 Revolution (by supporters), or the 2014–15 coup d’état (by opponents), was a popular revolution against Yemeni President Ali Abdullah Saleh led by the Houthis and their supporters that pushed Saleh’s government from power.

At least 9,081 people from Yemen fled in 2019 and applied for asylum in other countries, according to the statistics site World Data. This corresponds to roughly 0.031 percent of all the country’s 29 million residents. Most Yemeni refugees have resettled in Egypt, Malaysia and Germany.

Six years of conflict have forced nearly four million Yemenis to flee their homes and move elsewhere within Yemen in search of safety. The overwhelming majority, 76 percent, of these internally displaced people are women and children, writes Jean-Nicolas Beuze on the site of the UN High Commissioner for Refugees. 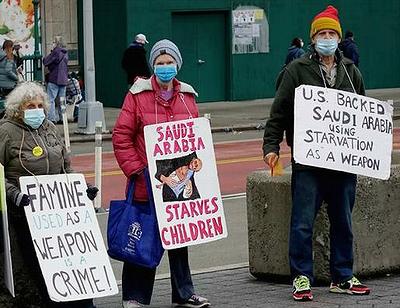 In 2020 alone, some 172,000 people were newly displaced in their homeland, giving tiny Yemen the fourth largest population of internally displaced people in the world, Beuze writes.

Worldwide, an estimated 46 million people had been forced to flee within their own countries’ borders by conflict and persecution by mid-2020, accounting for the majority of the world’s 80 million forcibly displaced people.

Back in Washington, DC, President Biden’s executive order on refugees and displaced people has an unprecedented section that deals with climate change and migration.

The report must include, at a minimum:

– discussion of the international security implications of climate-related migration;

– options for protection and resettlement of individuals displaced directly or indirectly from climate change;

– mechanisms for identifying such individuals, including through referrals;

– proposals for how these findings should affect use of United States foreign assistance to mitigate the negative impacts of climate change;

– opportunities to work collaboratively with other countries, international organizations and bodies, non-governmental organizations, and localities to respond to migration resulting directly or indirectly from climate change.

This report is to be prepared  in consultation with the Secretary of State, the Secretary of Defense, the Secretary of Homeland Security, the Administrator of the United States Agency for International Development, and the Director of National Intelligence, and the report, or a summary, will be made publicly available, President Biden ordered.

In his executive order on Friday, Biden set forth his priorities for refugees and migrants, saying, “My Administration shall seek opportunities to enhance access to the refugee program for people who are more vulnerable to persecution, including women, children, and other individuals who are at risk of persecution related to their gender, gender expression, or sexual orientation.”

Within 120 days of the date of this order, in May 2021, the Secretary of State and the Secretary of Health and Human Services shall deliver a plan to the President to enhance the capacity of the U.S. Refugee Admissions Program “to welcome refugees by expanding the use of community sponsorship and co-sponsorship models by refugee resettlement agencies, and by entering into new public-private partnerships.”

Biden clarified how different his administration is from that of his predecessor. “It is the policy of my Administration to respect and value the integrity of families seeking to enter the United States,” the president states in his order.

“My Administration condemns the human tragedy that occurred when our immigration laws were used to intentionally separate children from their parents or legal guardians (families), including through the use of the Zero-Tolerance Policy,” Biden states. “My Administration will protect family unity and ensure that children entering the United States are not separated from their families, except in the most extreme circumstances where a separation is clearly necessary for the safety and well-being of the child or is required by law.”