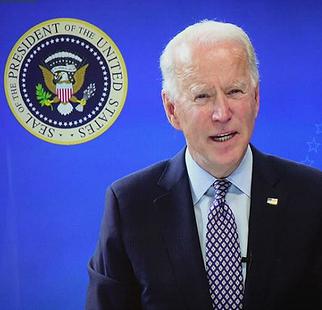 WASHINGTON, DC, April 22, 2021 (ENS) – President Joe Biden has invited 40 world leaders to participate in a virtual Leaders Summit on Climate he is hosting today, Earth Day April 22, and on April 23. His goal – to inspire agreement among the global community of nations on how to address the planet’s rising temperature, which is causing extreme weather events, glacial melt, sea-level rise, drought and wildfires around the world.
The virtual Leaders Summit will be live streamed for public viewing. [Sunny’s Note: Link to be provided when White House announces it, hopefully today. I will email it to you to place on this line.]
President Biden took action his first day in office to return the United States to the Paris Agreement. The Leaders Summit on Climate will underscore the urgency, and the economic benefits, of stronger climate action. It will be a key milestone on the road to the annual United Nations Climate Change Conference (COP26) to be held November 1-12 in Glasgow, Scotland.
In recent years, scientists have underscored the need to limit planetary warming to 1.5 degrees Celsius above the temperature at the start of the Industrial Revolution in order to avert the worst impacts of climate change. A key goal of both the Leaders Summit and COP26 will be to catalyze efforts that keep that 1.5-degree goal within reach.
In a media briefing on April 20, White House Press Secretary Jen Psaki offered a preview of President Biden’s goals for the summit. “The President’s goal is really to convene the world’s major economies and other key voices to galvanize efforts to keep the vital goal of limiting warming to 1.5 degrees Celsius within reach.  And we know we have had some backstep on that, which the United States has been certainly a part of over the last couple of years,” Psaki said.  We have a role to play.”
“During the summit, leaders will discuss mobilizing public- and private-sector financing to drive the net-zero transition and to help vulnerable countries cope with climate impacts,” she told reporters. “Obviously, the world’s larger economies, as you all know, have a sometimes greater responsibility for themselves, but also for economies that are not as economically advanced in helping address these issues.”
“It’s an opportunity to also talk about the economic benefits of climate action with a strong emphasis on job creation and the importance of ensuring all communities and workers benefit from this transition,” Psaki said.
“It’s really an opportunity and a forum to talk about how, as a global community, we can all come together to address what he sees as one of the four crises of his presidency,” Psaki said, adding, “Addressing the climate crisis is something that, even when you have disagreements about other areas, we can agree on that.”
The Leaders Summit will highlight examples of how enhanced climate ambition will create good paying jobs, advance innovative technologies, and help vulnerable countries adapt to climate impacts.
By the time of the Summit, the United States will announce what the White House calls “an ambitious 2030 emissions target” as its new Nationally Determined Contribution under the Paris Agreement.
In his invitation, President Biden urged world leaders to use the Summit as an opportunity to outline how their countries will contribute to stronger climate ambition. 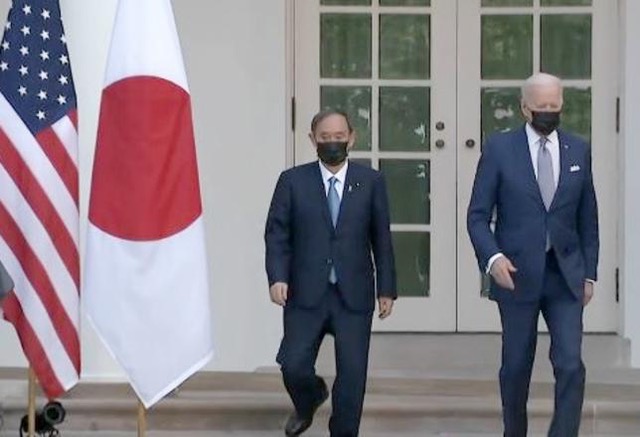 President Joe Biden, right, hosts Japanese Prime Minister Yoshihide Suga at the White House, his first in-person visit with a foreign leader since on January 20, 2021 when he assumed the presidency. The two leaders agreed to cooperate to solve the climate crisis. April 16, 2021, Washington, DC (Photo courtesy Voice of America) Posted for media use