And these windows have become a reality! After years of research, scientists at Los Alamos National Laboratory are now creating just such solar windows. 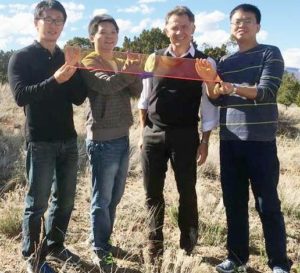 The scientists at the Center for Advanced Solar Photophysics at Los Alamos National Laboratory are seeking to transform everyday windows into solar collectors by harnessing the unique properties of quantum dots. They suggest the new technology will lower the cost of solar electricity.

Victor Klimov, lead researcher and director of the Center, said, “The approach complements existing photovoltaic technology by adding high-efficiency sunlight collectors to existing solar panels or integrating them as semitransparent windows into a building’s architecture.”

Quantum dots are tiny manufactured crystals, so small they can’t be seen with a typical microscope. Although they’re 10,000 times smaller than a human hair, quantum dots are actually powerful devices.

Each quantum dot is actually a tiny semiconductor, which means it can convert incoming energy.

It’s their size that gives quantum dots the unique ability to convert light into nearly any color in the visible spectrum with very high efficiency.

Light absorbed by the quantum dots activates these impurities. The front layer absorbs the blue and ultraviolet portions of the solar spectrum, while the rest of the spectrum is picked up by the bottom layer.

Following absorption, the dot re-emits a photon at a longer wavelength, and then the re-emitted light is guided by total internal reflection to the glass edges of the window.

There, solar cells integrated into the window frame collect the light and convert it to electricity.

The key to this advance is “solar-spectrum splitting,” which allows researchers to process separately higher–energy and lower-energy solar photons. The higher-energy photons can generate a higher photovoltage, which can boost the overall power output.

Windows that can collect solar energy like this, called photovoltaic windows, are the next frontier in renewable energy technologies. They have the potential to greatly increase the surface of buildings suitable for energy generation without impacting their aesthetics, a crucial aspect, especially in metropolitan areas.

Luminescent solar concentrator photovoltaic windows do not require anything to be applied onto their surface and since the photovoltaic cells are hidden in the window frames, they blend invisibly into the built environment.

Los Alamos has been on the development track towards solar windows for several years. Back in 2015, the Los Alamos team developed the colorless, non-toxic quantum dots that enable solar windows.

The building-integrated photovoltaic devices are now packaged as a luminescent solar concentrator or sunlight harvesting technology that can turn any window into a daytime power source.

“In these devices, a fraction of light transmitted through the window is absorbed by nanosized particles (semiconductor quantum dots) dispersed in a glass window, re-emitted at the infrared wavelength invisible to the human eye, and wave-guided to a solar cell at the edge of the window,” Klimov said in 2015.

“Using this design,” he said, “a nearly transparent window becomes an electrical generator, one that can power your room’s air conditioner on a hot day or a heater on a cold one.”

The University of Minnesota invented the process for creating silicon nanoparticles about a dozen years ago and holds a number of patents on this technology, which provided the starting point for quantum dot solar window technology.

University of Minnesota is one of five universities that are members of the Center for Advanced Solar Photophysics at Los Alamos National Lab, which is funded by the U.S. Department of Energy, Office of Science.

In early 2017, researchers at the University of Minnesota and University of Milano-Bicocca in Italy brought the dream of windows that can efficiently collect solar energy closer to reality with their high tech silicon nanoparticles.

Sergio Brovelli, an expert in LSC fabrication and lead researcher on the Italian team, concluded then, “Quantum dot solar window technology, of which we had demonstrated the feasibility just one year ago, now becomes a reality that can be transferred to the industry in the short to medium term, allowing us to convert not only rooftops, as we do now, but the whole body of urban buildings, including windows, into solar energy generators.”

While the price of solar photovoltaic cells recently has fallen and their efficiency has gone up, challenges remain around siting vast arrays of solar-electric panels and finding ways to integrate them into buildings and other applications.

These challenges prompted a joint research team from Los Alamos National Laboratory and the University of Milano-Bicocca to try a fresh approach to solar power. Working with quantum dots, the team achieved a breakthrough in solar-concentrating technology that can turn windows into electric generators and revolutionize the way we think about where and how we generate energy.