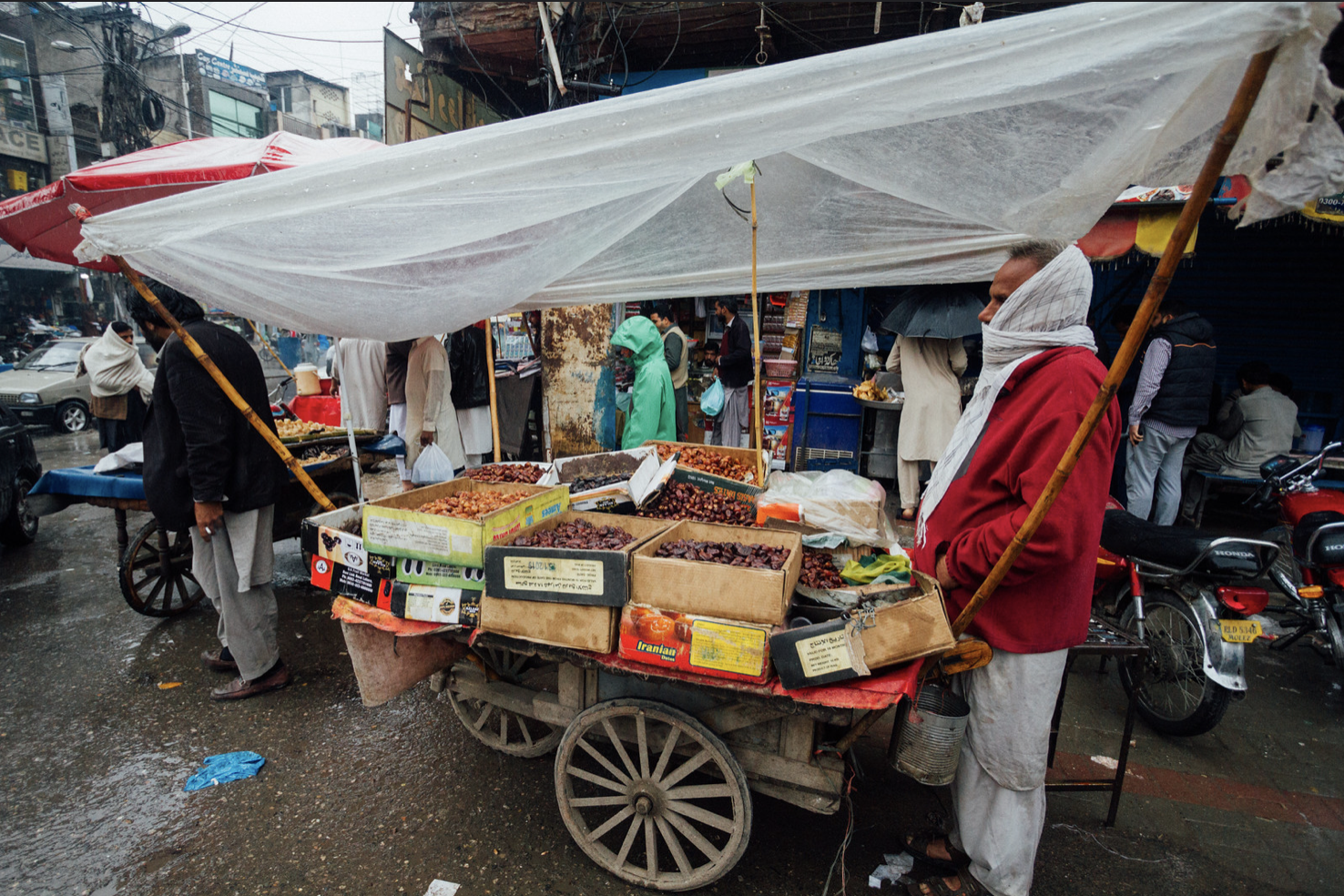 This dates vendor on a street corner in the city of Rawalpindi is part of Pakistan’s informal economy. March 5, 2020 (Photo by Adam Cohn) Creative Commons license via Flickr

WASHINGTON, DC, May 17, 2021 (Maximpact.com News) – In emerging market and developing economies, many workers and small enterprises operate informally, outside the legal and regulatory framework, but that could hold back the pandemic recovery in these economies unless governments adopt a comprehensive set of policies to address the drawbacks of the informal sector, concludes a new book by the World Bank Group.

This is not the kind of informality that encourages smiles, small talk and jokes with familiar neighbors and customers. For the purposes of this study, informality is defined as “market-based legal production of

goods and services that is hidden from public authorities for monetary, regulatory, or institutional reasons.”

“The Long Shadow of Informality: Challenges and Policies,” is the first comprehensive World Bank analysis examining the extent of informality and its implications for an economic recovery that supports green, resilient and inclusive development in the long-term.

Informal workers can be street vendors or they can work from their homes; they are taxi drivers, domestic workers, massage therapists and waste pickers. In emerging market and developing economies, informal enterprises account for 72 percent of firms in the services sector.

“The pandemic and associated containment measures plunged the global economy into a severe contraction. Global output shrank by more than 4 percent in 2020, with output in emerging market and developing economies (EMDEs) contracting by about 3 percent, the group’s first annual contraction in more than sixty years,” the World Bank authors write.

“Over the past century and a half, the pandemic-driven global recession was the deepest since the Second World War and featured the largest fraction of economies with declines in per capita output since at least 1870,” they state. “The decline in per capita incomes during the pandemic has pushed millions of people into extreme poverty since the beginning of the pandemic. While the pandemic has been simply devastating, its impact has been particularly severe on the informal sector.”

Workers in the informal sector tend to be lower skilled and lower-paid, with less access to finance and social safety nets, than workers in the formal sector, the study found, leading to more vulnerability to the coronavirus. They often live and work in crowded conditions and conduct all transactions in cash—factors that promote the spread of disease, the authors write, citing a separate 2020 study.

The absence of social safety nets makes informal workers less able to afford to adhere to social distancing requirements, which undermines policy efforts to contain the spread of COVID-19, the study found. In EMDEs with the most pervasive informality, people are more likely to be driven into poverty if they have to make direct out-of-pocket payments for health-care emergencies.

The informal sector is huge, accounting for more than 70 percent of total employment, and nearly one-third of GDP, in emerging market and developing economies. That scale diminishes these countries’ ability to mobilize the fiscal resources needed to bolster the economy in a crisis, to conduct effective macroeconomic policies, and to build human capital for long-term development, the analysis concludes.

Informal Workers Linked to Society But Left Behind

Instead, the World Bank authors found that in economies with widespread informality, government resources to combat deep recessions and to support subsequent recovery are more limited than in other economies.

Government revenues in emerging market and developing economies (EMDEs) with above-average informality totaled about 20 percent of GDP – five to 12 percentage points below the level in other EMDEs.

Government expenditures were lower by as much as 10 percentage points  of GDP. Similarly, central banks’ ability to support economies is constrained by the underdeveloped financial systems associated with widespread informality.

“Informal workers are predominantly women and young people who lack skills. Amid the COVID-19 crisis, they are often left behind, with little recourse to social safety nets when they lose their jobs or suffer severe income losses,” said Mari Pangestu, World Bank managing director for development policy and partnerships. “This analysis will help to fill knowledge gaps in an understudied area and get policy makers back on track to tackle informality, which will be critical going forward as we work to achieve green, resilient and inclusive development.”

High informality undermines policy efforts to slow down the spread of COVID-19 and boost economic growth. Limited access to social safety nets has meant that many participants in the informal sector have neither been able to afford to stay at home nor adhere to social-distancing requirements.

In a separate study <https://www.wiego.org/sites/default/files/publications/file/WIEGO_FactSheet_Bangkok_Final_web.pdf> published in February, the organization Women in Informal Employment: Globalizing and Organizing (WIEGO) delved into the situation of informal workers in 12 cities in emerging economies.

In an interview for this study, a WIEGO interviewer was told by a woman waste picker in Bangkok, “One of the problems for waste pickers is the uncertainty in waste price – it is not as high as before. The change and uncertainty in price makes it hard for waste pickers to estimate their daily income. Some wastes almost had no value, if sold on daily basis. However compiling them in one chunk before selling is difficult if their accommodation does not allow them to collect these wastes.”

The World Bank study shows that informality can be tackled in EMDEs. In fact, while it remains high, it had been on a declining trend for three decades before the COVID-19 pandemic.

Between 1990 and 2018, on average, informality fell by about seven percentage points of GDP to 32 percent of GDP.

Over the past three decades, many governments in emerging market and developing economies have implemented policy reforms either to increase the benefits of formal-sector participation or to reduce the costs of these activities. These included tax reforms, reforms to increase access to finance, and stronger governance.

Informality is highest in Sub-Saharan Africa, at 36 percent of gross domestic product, GDP. It is lowest in the Middle East and North Africa, at 22 percent.

In South Asia and Sub-Saharan Africa, pervasive informality is largely the result of low human capital and large agricultural sectors.

In Europe and Central Asia, Latin America and the Caribbean, the Middle East and North Africa, heavy regulatory and tax burdens and weak institutions have been factors in driving informality.

1 – Take a comprehensive approach – because informality reflects broad-based underdevelopment and cannot be tackled in isolation;

2 – Tailor measures to country circumstances because the causes of informality vary widely;

3 – Improve access to education, markets, and finance so that informal workers and firms can become sufficiently productive to move to the formal sector;

4 – Improve governance and business climates so the formal sector can flourish;

For more on informality and its effects, visit the website: www.worldbank.org/informal-economy