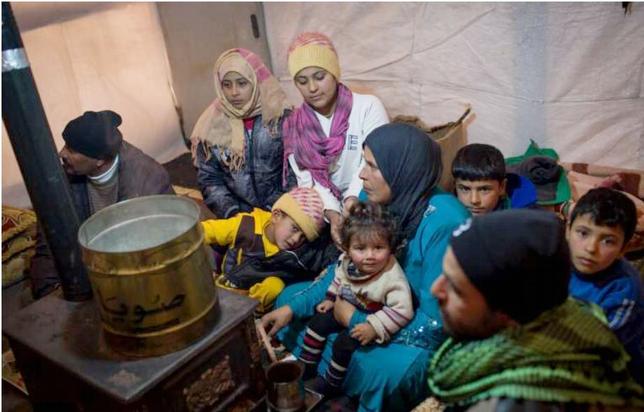 Members of a Syrian refugee family huddle around a stove inside their shelter in Lebanon’s Bekaa Valley. 2013 (Photo by A. McConnell courtesy UNHCR) Posted for media use

In Ethiopia, most refugees lack any reliable access at all to electric lighting.

Yet, stand-alone solar systems with battery banks could cushion the impact of voltage fluctuations on the grid. Larger solar parks could provide electricity in and around settlements, as well as creating an enduring asset for communities that host the world’s roughly 26 million refugees.

To increase the role of renewable power solutions for displaced communities, the United Nations’ International Renewable Energy Agency (IRENA) and the UN Refugee Agency (UNHCR) have forged a new partnership.

Both organizations signed a new Memorandum of Understanding on December 18 to enhance their existing cooperation on promoting renewable energy solutions to improve the humanitarian situation for the millions of people uprooted from their homes due to natural disaster or conflict.

A new report was issued that day by the two agencies in line with the UNHCR’s Global Strategy for Sustainable Energy 2019-2024.

The report, “Renewables for refugee settlements: Sustainable energy access in humanitarian situations,” was released at the Global Refugee Forum in Geneva. It examines the energy needs at refugee camps and identifies renewables-based solutions for four sites in Iraq and Ethiopia. Findings and recommendations are based on data collected from the Darashakran and Domiz camps in Iraq, and Tsore and Sherkole in Ethiopia.

“Renewable solutions could become essential to the humanitarian toolkit,” says IRENA’s Director-General Francesco La Camera. “Off-grid and grid-connected small- and medium-sized solar installations are available, affordable and can bring reliable power to millions of displaced people around the world.”

“Renewables can quickly and effectively change the lives of refugees for the better,” La Camera said.

The study highlights prime opportunities to strengthen any humanitarian operation which can be replicated in other similar situations.

“We aim to ensure that refugees can meet their basic energy needs in exile while also minimizing environmental degradation. Sustainable energy access will bridge this gap, enabling refugees to pursue education, supporting businesses and social enterprises, spurring innovation and exponentially enhancing the safety and well-being of people and communities, until such time that they can return home,” said the UN High Commissioner for Refugees, Filippo Grandi.

“This report and this new partnership between IRENA and UNHCR, is the beginning of an important alliance to mainstream access to energy for refugees and displaced people as well as their local communities, ensuring that they are not left behind,” Grandi said.

Families can now connect fridges, TVs, a fan, have light inside the shelter and charge their phones in Jordan’s Azraq refugee camp, the world’s first refugee camp to be powered by renewable energy. The camp houses a two megawatt (MW) solar photovoltaic plant, allowing the UNHCR to provide sustainable energy to more than 20,000 Syrian refugees.

This project, funded by the IKEA Foundation, will contribute to Jordan’s national strategy to achieve a green economy by 2020. It demonstrates how corporations and the private sector can contribute to a global transition to cleaner, more sustainable energy.

Another major solar project, funded by Germany, is located in Jordan’s Za’atari refugee camp. The 12.9 MW solar photovoltaic plant is the largest ever built in a refugee camp.

It provides energy for more than 80,000 Syrian refugees at a fraction of the energy cost of burning fossil fuel, saving the UNHCR US$5.5 million a year to reinvest in other forms of humanitarian assistance.

Building this plant has also brought benefit to the local community by creating employment and building the technical skills of local people. Local Jordanian workers, along with 75 refugees living in the camp were hired to install the 40,000 photovoltaic panels. In addition to that, being connected to Jordan’s national grid, any excess energy produced by the plant can be used by the surrounding Jordanian communities.

The refugee energy crisis is especially unforgiving to refugee women. The UNHCR says women walk up to 10 kilometers a day to collect firewood, leaving them at risk of sexual and gender-based violence. Their children, often left behind at the camp, increasing the risk of them being abused.

The Fund for Refugee Women, established by Sheikha Fatima bint Mubarak in collaboration with the Emirates Red Crescent and UNHCR, aims to improve the lives of refugee women in refugee communities by providing them with access to alternative energy sources.

Without clean energy and sustainable energy solutions, many refugees living in impoverished regions depend on firewood to meet their basic energy needs. Cutting down trees for firewood causes deforestation, increased carbon emissions, and can raise tensions with the local community, who also rely on those resources.

UNHCR believes that the introduction of sustainable forms of energy to those refugee communities would not only diminish the conflict that arises from competition over natural resources, but would also energize the renewable energy market in those impoverished regions, bringing benefit to the host communities as well.