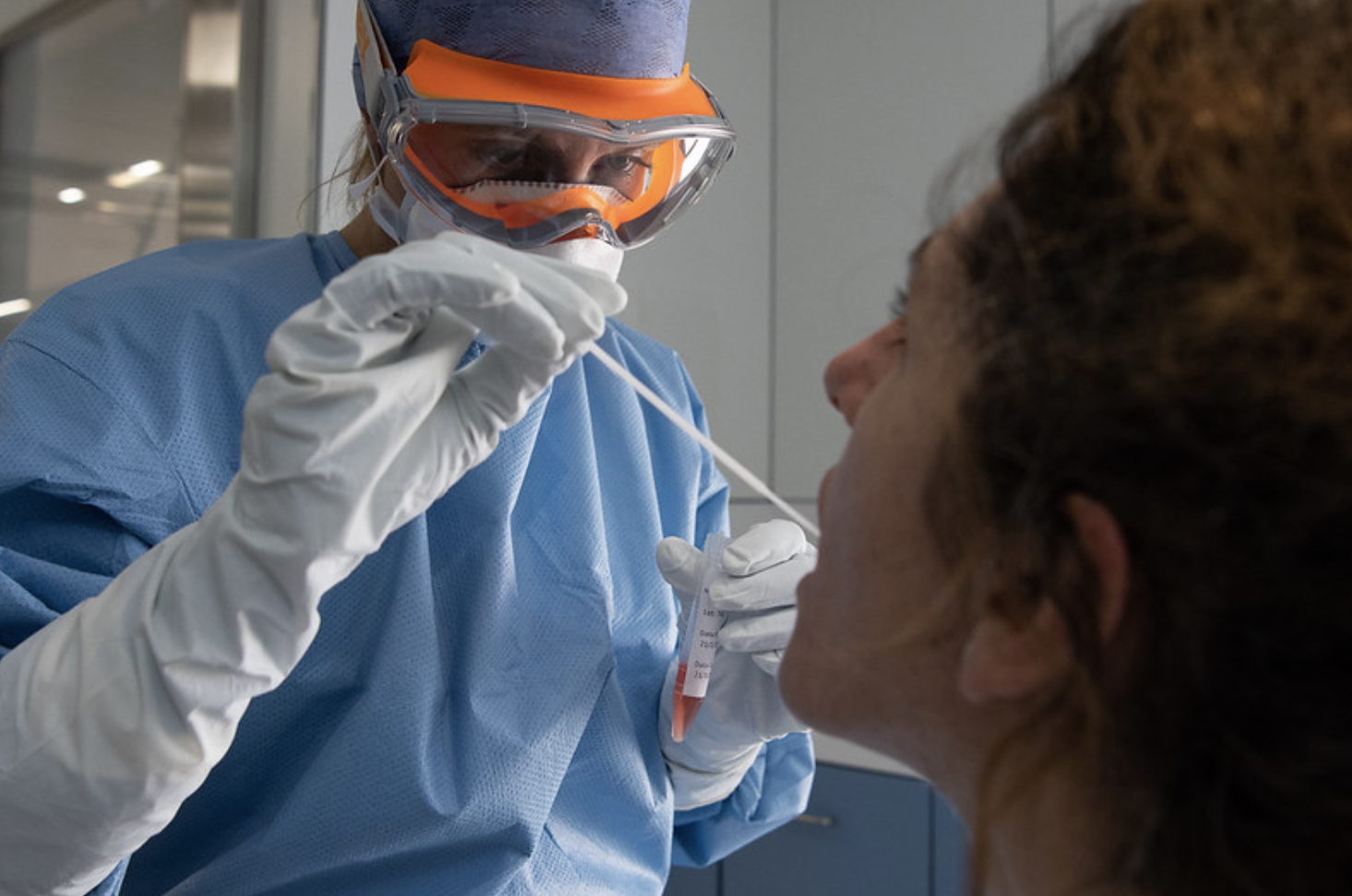 Medic tests a patient for COVID-19, the disease caused by the novel coronavirus, at the Hospital Clinic, Barcelona, Spain, March 18, 2020 (Photo by Hospital Clinic) Creative Commons license via Flickr

GENEVA, Switzerland, April 15, 2020 (Maximpact.com News) – Doctors and nurses wearing surgical masks and gloves dash in and out of hospital rooms, working around the clock to register and check the symptoms of anxious patients filling up every space in the hallways of the Taleghani Hospital in Iran. Refugee nurse Moheyman Alkhatavi uses a long, cotton-tipped swab to collect cell samples from the nose of a frail, elderly man.

“When I administer the COVID-19 test, I pray and hope that it will come back negative,” he says, speaking at the start of a 12-hour night shift.

Alkhatavi is an Iraqi refugee who works as a nurse at the in-patient ward of the Taleghani Hospital in Abadan, a city in the province of Khuzestan, Iran. 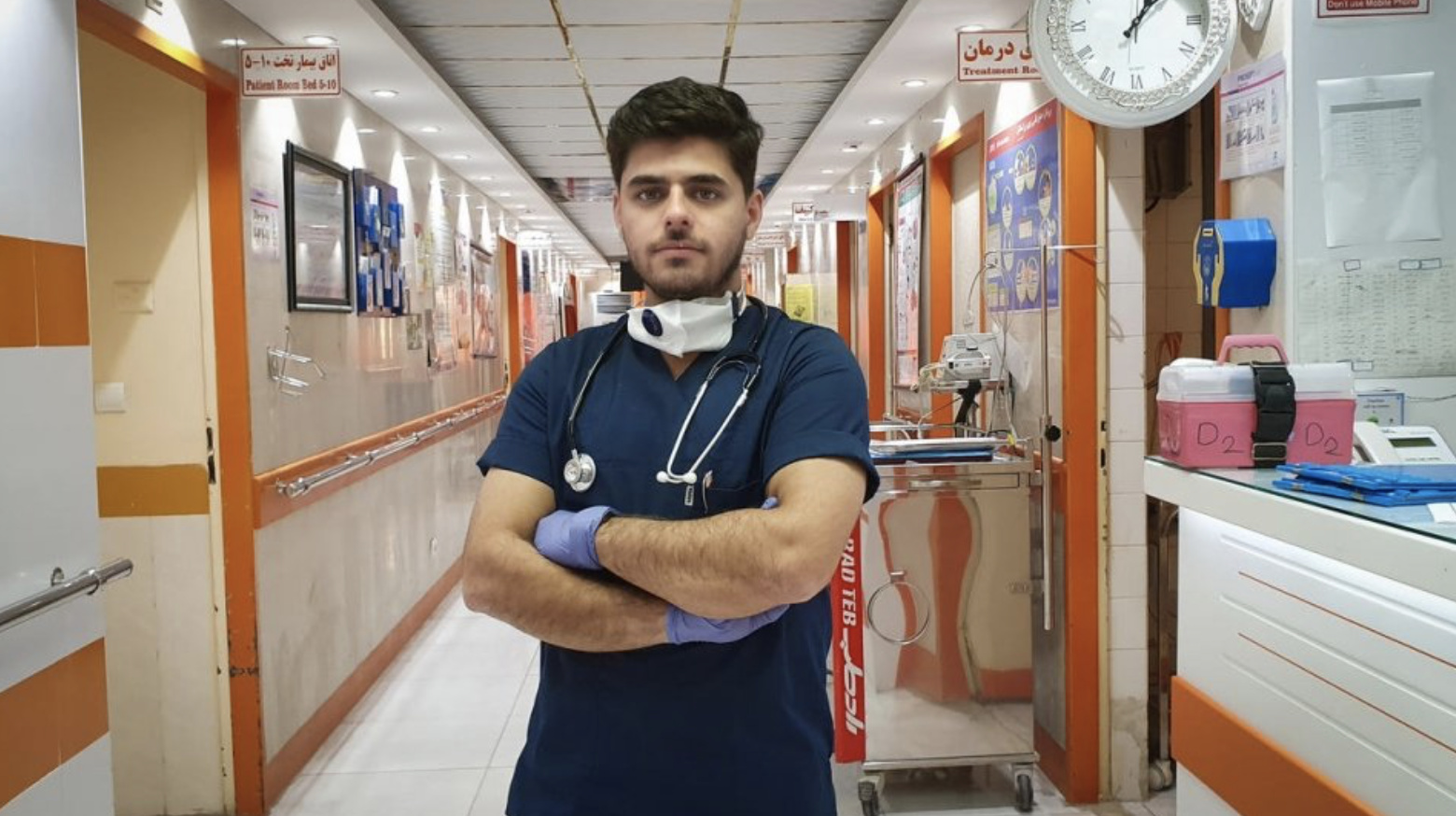 Alkhatavi was born in Ahwaz, Iran, after his father fled Iraq some 40 years ago, due to insecurity. After finishing high school, Alkhatavi was able to pursue a university degree in nursing through a United Nations refugee agency’s scholarship program, funded by the German government.

“Alkhatavi said he feels proud to be able to help both people in the host community and his fellow refugees during the public health emergency that has engulfed the country.

“I remember people telling me that, because I was a refugee, I shouldn’t dream to go to university and instead focus on learning an easier trade,” he says. “But I wanted to make a difference in people’s lives,” he told reporter Farha Bhoyroo, who published the interview on the the website of the UNHCR, the United Nations refugee agency.

Since the first confirmed case of coronavirus was reported in Iran in the second half of February, the infection has spread at lightning speed to all 31 provinces of the country.

Reflecting what is happening around the world, the number of people infected has increased sharply week on week, and the country’s stock of medicines and the availability of medical equipment and medical staff is constrained.

Alkhatavi is part of a team of nurses working on rotation to monitor some 50 new patients admitted to the hospital’s quarantine unit each week while they await their test results. He constantly checks his patients’ breathing and temperature, and tries to secure the medicines they need to manage their pain.

The focus of this year’s World Health Day on April 7 was on the critical role played by nurses like Alkhatavi, who now find themselves at the forefront of the global fight to curb the spread of coronavirus.

“We are all scared, but I choose to still hope,” he said. “Every day I start my shift hoping that all the required personal protective equipment will be available, but I put my patients first. We had two patients who tested positive but recovered. This is a small ray of light in an otherwise very stressful time.”

To support the Government of Iran in addressing critical shortages in the country’s health-care system, in late March UNHCR airlifted some 4.4 tonnes of much-needed medical aid items, including medicine to support the COVID-19 response.

Libyan Doctor in France: ‘I Am Not Scared’

Seriously ill patients continue to flood into emergency rooms across the world, straining hospitals’ healthcare staff. Globally, as of April 14, 2020, there have been 1,848,439 confirmed cases of COVID-19, including 117,217 deaths, reported to the World Health Organization (WHO).

Mohamed, 39, worked as a doctor in his home country of Libya and was training to become a surgeon until violence forced him to flee to France in 2016.

He passed the French language exams required to start the process of registering as a doctor and completed internships where he shadowed senior doctors at hospitals in the northern city of Rouen and Limoges in the west of the country. He also volunteered for French charities and is prepared to go wherever he is needed.

“My dream is to work as a doctor. It’s my life. It’s my oxygen,” Mohamed says. “I am ready to do anything to help.”

When the COVID-19 crisis began in France, he immediately registered on the emergency roster set up by the Ministry of Health to support medical staff in hospitals.

“Refugee doctors can contribute to support and fight the virus. I have seen that in other European countries, refugee doctors are also called to work and help with the emergency situation,” Mohamed says.

“I am ready to do anything to help. I can work in the emergency room in a hospital at any position. I can be an assistant nurse; I can help in giving information. For all these positions, it’s very important to have staff in hospitals who know how to deal with such a situation. You have to be very careful, even in carrying the garbage,” he said.

Mohamed says his experience of war in Libya has taught him to remain calm and focused in difficult situations. “An epidemic can be stressful, but it’s nothing compared to war. I am not scared. I am ready to go anywhere in France to help,” he said.

Before Yasin fled Somalia three years ago, he studied medicine and qualified as a doctor. When he arrived in France he was eager to continue his work as a medic. In the event, he was unable to find work and eventually spent time living on the streets of Paris. 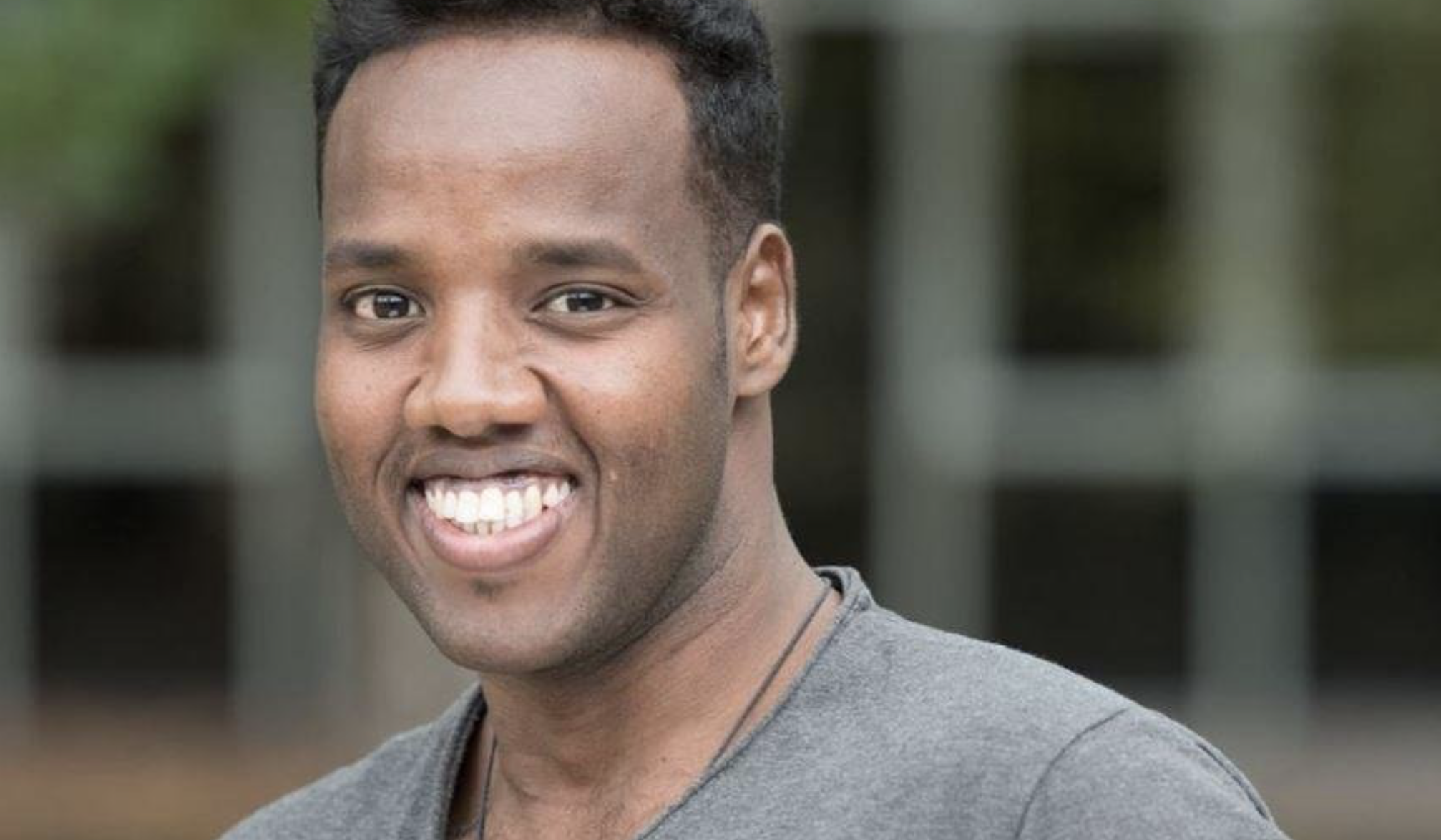 Undeterred, he founded an NGO, Network of Exiles in France, to make a difference in his new home country. Refugees and asylum seekers are heavily involved in the organization, participating in language exchanges and volunteering to translate documents.

The pandemic has given the charity an opportunity to contribute directly and has also made them extra busy.

Prior to the COVID-19 outbreak, volunteers translated around 10 documents per week, primarily helping asylum seekers with the asylum process in France. Now they are translating documents that provide information on the lockdown in France and advice on who to contact if a person is feeling unwell. In all, they have translated over 220 documents.

“Hospitals, charities and accommodation centres have been sending us documents, certificates  and flyers, and we have been translating them for free,” Yasin said. “Some asylum seekers don’t understand the lockdown, so we help to explain in their own language.”

“During difficult times, the language barrier can become frustrating. We want to help.”

Once the lockdown is over, Yasin and the other volunteers plans to chart a new way forward but for now they have a simple message:

Filippo Grandi, the UN High Commissioner for Refugees, said Tuesday, “In recent weeks, several States in Europe have publicly appealed for refugee health professionals to join in national responses to the virus. We fully support such initiatives and hope they can be further expanded across the continent and beyond.”

“Medical professionals and health workers across the continent have responded to the pandemic with selfless determination, and all available help is needed at this time of crisis. Refugees with proven professional competencies are ready to step in and contribute if allowed to, under the supervision of certified health professionals. In this way, they can show their solidarity, and give back to the communities sheltering them.” said Grandi.

There are refugees and asylum seekers currently in Europe with the competences and relevant experience who are willing to get involved and help. But most health-related professions are tightly regulated and competent national health authorities need to give the necessary approvals.

“Refugees, their host societies and their home countries all benefit from the European Qualifications Passport for Refugees (EQPR),” said Marija Pejčinović Burić, Secretary General of the Council of Europe.

“The qualifications that refugees already have, but cannot fully document, can be used and can be built on,” she said. “The EQPR is not a substitute for the necessary professional certificates and licences, but it does help the authorities speed things up by providing some of the background needed.”

On March 26, UNHCR called for US$255 million as part of the wider UN appeal for its US$2 billion global plan to fight COVID-19. The money would be used to boost preparedness, prevention and response activities to address the immediate public health needs of refugees and host communities in some of the world’s most vulnerable countries.