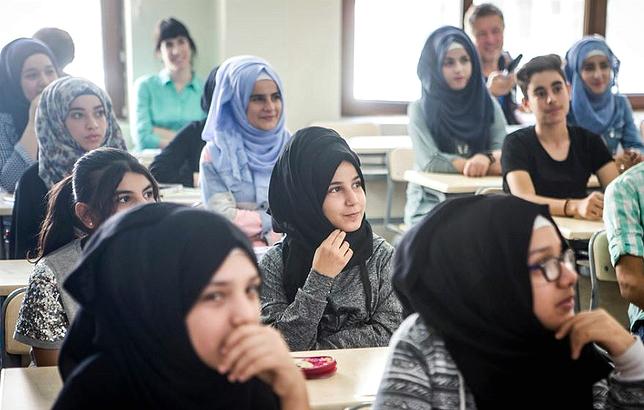 CAMBRIDGE, Massachusetts, January 30, 2020 (Maximpact.com News) – As millions of displaced people move around the world in search of safer lives, learning the language of their adopted homes is a skill best acquired young. Scientists say there appears to be a critical period for language learning, although the length of this period and its underlying causes remain to be unraveled.

Recent research confirms what many people already recognize – children pick up languages more easily than adults, and it’s more difficult to learn a new language as an adult than as a child.

The idea that language is best acquired during a critical period in a person’s life was first proposed by neurologists Wilder Penfield and Lamar Roberts in 1959 and popularized by linguist Eric Lenneberg in 1967. Dr. Maria Montessori was one of the early educators who brought attention to this phenomenon, calling it “sensitive periods.” 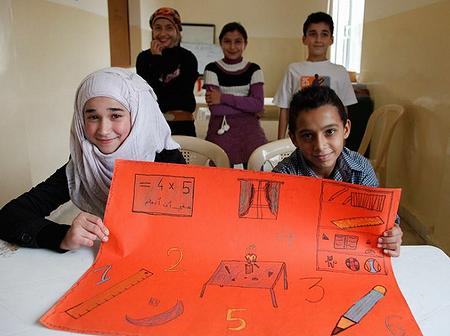 This 12-year-old Syrian refugee girl and her nine-year-old brother had been displaced and out of school for over a year at the time this photo was taken due to the conflict in Syria. November 7, 2013 (Photo courtesy UK Dept. of International Development) Creative Commons license via Flickr

A recent study performed at the Massachusetts Institute of Technology (MIT) found that children remain very skilled at learning the grammar of a new language much longer than expected – up to the age of 17 or 18. But by then the teens don’t have as good a chance as even younger people do to learn a language so well they sound like a native speaker.

The findings are based on analysis of a grammar quiz taken by nearly 670,000 people, which is by far the largest dataset that anyone has assembled for a study of language-learning ability.

“If you want to have native-like knowledge of English grammar you should start by about 10 years old. We don’t see very much difference between people who start at birth and people who start at 10, but we start seeing a decline after that,” says Joshua Hartshorne, an assistant professor of psychology at Boston College, who conducted the study as a postdoctoral fellow at MIT.

People who start learning a language between 10 and 18 will still learn quickly, but since they have a shorter window before their learning ability declines, they usually do not achieve the proficiency of native speakers, the researchers found, although there are special cases of adults acquiring a second language with native-like proficiency.

“It’s been very difficult until now to get all the data you would need to answer this question of how long the critical period lasts,” says Josh Tenenbaum, an MIT professor of brain and cognitive sciences and an author of the paper, which appeared in the journal “Cognition” on May 1, 2018.

“This is one of those rare opportunities in science where we could work on a question that is very old, that many smart people have thought about and written about and take a new perspective and see something that maybe other people haven’t,” Tenenbaum said.

Following people as they learn a language over many years is difficult and time-consuming, so the MIT researchers came up with a different approach. They took snapshots of hundreds of thousands of people who were in different stages of learning English. By measuring the grammatical ability of many people of different ages, who started learning English at different points in their lives, the researchers could get enough data to come to some meaningful conclusions.

Hartshorne’s original estimate was that they needed at least half a million participants – unprecedented for this type of study. Faced with the challenge of

attracting so many test subjects, he set out to create a grammar quiz that would be entertaining enough to go viral.

Within hours after being posted on Facebook, the 10-minute quiz “Which English?” had gone viral.

“The amount of traffic we were getting was just overwhelming,” Hartshorne says. “That’s how I knew the experiment was sufficiently fun.”

After taking the quiz, users were asked to reveal their current age and the age at which they began learning English, as well as other facts about their language background. The researchers ended up with complete data for 669,498 people, and once they had this huge amount of data, they had to figure out how to analyze it.

“We had to tease apart how many years has someone been studying this language, when they started speaking it, and what kind of exposure have they been getting. Were they learning in a class or were they immigrants to an English-speaking country?” Hartshorne says.

The researchers developed and tested a range of computational models to see which was most consistent with their results. Their findings suggest that the critical period for learning language is much longer than cognitive scientists had previously thought.

The authors note that adults are still good at learning foreign languages, but they will not be able to reach the level of a native speaker if they begin learning as a teenager or as an adult.

Still unknown is what causes the critical period to end around age 18. The researchers suggest that cultural factors may play a role, but there may also be changes in brain plasticity that occur around that age.

In response to the educational and psychological crisis among refugee children, the NYU and Bahcesehir researchers enlisted colleagues with deep expertise in educational technology and designed an online, game-based learning intervention for refugee children named Project Hope.

The study of Syrian refugee children, presented by researchers in June 2017 at Bay Atlantic University in Washington, DC, indicates that digital games can be a cost-efficient and scalable approach to meeting the educational and psychological needs of refugee children.

“It is our hope that this study shows that even with limited resources, and even when there are language barriers, we can make a difference in the lives of children through leveraging technology,” said Selcuk Sirin, a professor of applied psychology at New York University (NYU) Steinhardt and a Project Hope investigator.

Turkey is the top refugee-hosting country in the world, with more than four million registered refugees, most from Syria.

An NYU-Bahcesehir research team was the first to document the educational and mental health needs of Syrian refugee children, finding that an overwhelming majority are not enrolled in school in Turkey, partly as a result of language barriers, and about half suffer from post-traumatic stress disorder (PTSD) and/or depression.

“We were excited about this opportunity to apply our research findings to help address the urgent needs of refugee children, needs that could not be met with traditional, on-the-ground service delivery. Instead, we took advantage of the power of digital media,” said Jan Plass, professor of digital media and learning sciences at NYU Steinhardt and a Project Hope investigator.

The objective of Project Hope is to support Syrian refugee children in Turkey by providing them with digital game-based education opportunities to improve Turkish language proficiency, executive functions, and coding skills while decreasing their sense of despair and increasing hope.

To test the effectiveness of Project Hope, the researchers conducted a pilot study in Urfa, Turkey, a city on the border with Syria and home to the largest refugee settlement in Turkey. The study participants included 147 Syrian refugee children, ages nine to 14.

Overall, satisfaction was high, and the refugee children reported that they were learning from the games and would recommend them. The children also improved on all measures after the four-week intervention.

“Play is a universal way of learning. In taking a game-based and playful approach to learning, we created an intervention that was not only effective, but also one in which the children were engaged and wanted continue doing,” said Bruce Homer, associate professor of educational psychology at the CUNY Graduate Center and a Project Hope investigator.