Refugees Around the World Struggle to Survive 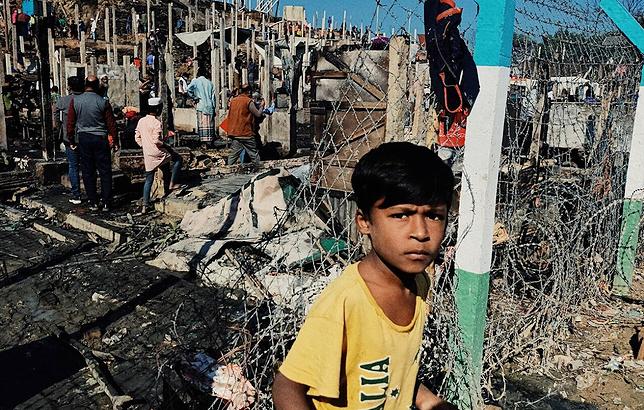 Barbed wire fencing between camps at Cox’s Bazar, Bangladesh made it harder for refugees to escape the fires. January 2022 (Photo by Imrul Islam, Norwegian Refugee Council) Posted for media use

GENEVA, Switzerland, January 14, 2022 (Maximpact.com News) – A destructive fire broke out on the afternoon of January 10, sweeping through refugee dwellings in Cox’s Bazar on the southeast coast of Bangladesh, site of the world’s largest refugee camp. The flames were confined to one area, but the damage is extensive, and refugees were forced to break through barbed wire fencing to reach safety.

Some 5,000 Rohingya refugees lost their homes. “About 1,200 houses were burned in the fire,” said Kamran Hossain, a spokesperson for the Armed Police Battalion, which heads security in the camp.

Mohammed Shamsud Douza, a Bangladesh government official responsible for refugees, said emergency workers had brought the fire under control. The cause of the blaze has not yet been established, he said.

After fleeing persecution and violence in Myanmar in August 2017, there are about 902,950 Rohingya people, about half of whom are women and girls, now living mostly in 34 refugee camps in the Cox’s Bazar district.

Fires are a constant hazard in Cox’s Bazar, where close to one million people live in extremely crowded conditions, with bamboo and tarpaulin shelters jammed together, surrounded by fencing.

Sunday’s fire comes just a week after another blaze broke out January 2 at a Covid-19 isolation and treatment center run by the International Organization For Migration (IOM).

In a tweet, IOM said that no one was hurt at the health facility, part of the vast Cox’s Bazar camp complex. Parts of the hospital were badly damaged, but health services are expected to “resume soon”, the agency said.

Roberto Vila-Sexto, the Norwegian Refugee Council’s country director in Bangladesh, said he fears future fires could cause even greater destruction.

“We need to provide safe, dignified shelter for refugees using fire-retardant material, and the dangerous barbed-wire fencing should be removed that divides the camps and slows the escape of people fleeing the flames,” he advised.

IOM said it was assessing the scale of the damage caused by the latest blaze. Nusrath Ghazzali, the officer-in-charge for IOM Bangladesh, said, “We are coordinating with other humanitarian actors to ensure that those affected are provided with food, health, protection, water, sanitation, and hygiene needs.” 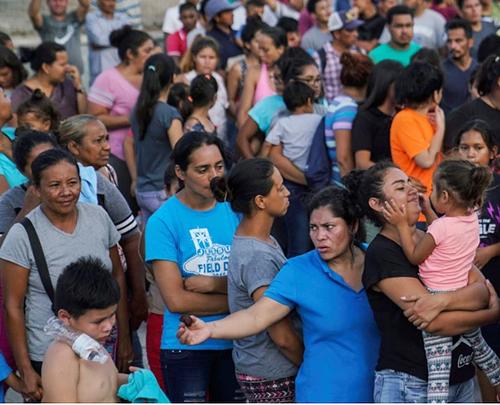 Migrants, many of whom were returned to Mexico under the Trump administration’s “Remain in Mexico” policy, wait in line to get a meal in an encampment near the Gateway International Bridge in Matamoros, on the Mexico-U.S. border, August 30, 2019. (Photo courtesy Voice of America) Public domain

The current “Refugee Brief” issued January 7, by the UN High Commission for Refugees (UNHCR) turns the spotlight on the dire situations of refugees in Ethiopia’s Tigray, Afghanistan, Mexico, Syria, and the Poland-Belarus border.

Aid agencies have noted an upsurge in air strikes since October which have killed at least 143 people in the Tigray region.

Fighting between government forces and the Tigray People’s Liberation Army has left millions in desperate need of humanitarian assistance. Doctors in Tigray this week said patients were needlessly dying because of a de-facto blockade preventing medicines and other lifesaving supplies from reaching hospitals.

UNHCR chief Filippo Grandi called on parties to the 14-month-long conflict that started in northern Ethiopia to respect the rights of all civilians, including refugees. “Refugees are not, and should never be a target,” he said.

Heavy snowfall and rain affected many areas of Afghanistan last week, blocking roads and causing avalanches and flooding in 30 out of 34 provinces, according to aid agencies.

The UN warned that the harsh winter conditions are further aggravating the already severe conditions faced by many Afghans, particularly millions of internally displaced people.

People in Afghanistan face one of the world’s most rapidly growing humanitarian crises, according to UN agencies. Half of the population faces acute hunger, over nine million people are displaced, millions of children are out of school, the fundamental rights of women and girls are under attack, farmers and herders are struggling amid the worst drought in decades, and the economy is in free fall.

Without support, tens of thousands of children are at risk of dying from malnutrition as basic health services have collapsed.

Conflict has subsided, but violence, fear and deprivation continue to drive Afghans to seek safety and asylum across borders, particularly in Iran and Pakistan. More than 2.2 million registered refugees and a further four million Afghans with different statuses are hosted in the neighboring countries. This has stretched the capacity of the communities hosting them, and they, too, need support.

The UN Under-Secretary-General for Humanitarian Affairs and Emergency Relief Coordinator Martin Griffiths said, “Events in Afghanistan over the past year have unfolded with dizzying speed and with profound consequences for the Afghan people. The world is perplexed and looking for the right way to react. Meanwhile, a full-blown humanitarian catastrophe looms. “My message is urgent: don’t shut the door on the people of Afghanistan. Humanitarian partners are on the ground, and they are delivering, despite the challenges. Help us scale up and stave off wide-spread hunger, disease, malnutrition and ultimately death by supporting the humanitarian plans we are launching today.”

In addition, the United States is providing the people of Afghanistan with one million additional COVID-19 vaccine doses through COVAX, bringing the U.S. total vaccine donation to 4.3 million doses.

On January 11, UNHCR and the UN Office for the Coordination of Humanitarian Affairs (OCHA) with non-governmental organizations jointly launched a refugee response plan covering Afghan refugees and host communities in five neighboring countries.

In addition, the UNHCR and OCHA plan to launch an humanitarian and refugee response plan this year. Combined, the two plans will require over US$5 billion in international funding in 2022.

The number of people applying for asylum in Mexico nearly doubled between 2019 and 2021, reaching a record high of over 130,000 last year, according to the Mexican Commission for Refugee Assistance (COMAR).

The main nationalities were Haitians and Hondurans, while the majority of claims were filed in the southern city of Tapachula, near the Guatemalan border.

UNHCR has urged the government to consider granting legal migration pathways to ease pressure on overwhelmed COMAR officials in Tapachula where asylum-seekers have complained about long waits for their applications to be processed.

Separately, the United States this week began returning asylum-seekers to the Mexican border city of Tijuana as part of its reinstatement of the Migrant Protection Protocols program first put in place by President Donald Trump. President Joe Biden was winding down the program until a U.S. Federal Court order forced his administration to restart it late last year.

An attack on Syria’s Idlib province has left over 200,000 people without water. The start of the year saw an escalation of violence in the northwest of Syria that left two children dead and another four injured, according to UNICEF.

On January 2, Russian warplanes bombed a pumping station that provides water to rebel-controlled Idlib city in northwestern Syria. The attack on damaged a UNICEF-supported water station, cutting off water supply to over 241,000 people in Idlib, many of whom are internally displaced.

Reuters reports that makeshift camps housing thousands of displaced families near Jisr al Shuqhur, west of Idlib city had also been hit during a series of attacks on the weekend.

Most of the population in Idlib is dependent on UN humanitarian assistance to survive.

The UN’s deputy regional humanitarian coordinator, Mark Cutts, observed that Syria is already facing a water crisis and called for attacks on civilians and civilian infrastructure to stop.

Medics Turned Away From Poland-Belarus Border

The international humanitarian group Médecins Sans Frontières (MSF), Doctors Without Borders, announced Thursday that its emergency response team had left Poland without reaching migrants and refugees after being blocked from accessing groups of unsheltered people on the move in a forested area near the border with Belarus.

MSF said it had spent three months seeking permission to access the restricted area and provide medical and humanitarian assistance to people surviving in sub-zero temperatures, but without success.

While hundreds of migrants and refugees are being sheltered in a logistics centre on the Belarus side of the border, a number of people are reported to still be sleepng rough and living in harsh conditions along the border.

Poland has imposed a state of emergency along its border with Belarus that prohibits all non-residents, including aid groups, from entering the area.

The Under-Secretary-General for Humanitarian Affairs and Emergency Relief Coordinator, Martin Griffiths, today released US$150 million from the Central Emergency Response Fund (CERF) to boost underfunded humanitarian operations in 13 countries in Africa, the Americas, Asia and the Middle East.

The announcement follows the recent launch of the Global Humanitarian Overview, which predicts that this year 274 million people will need humanitarian assistance, the highest number in decades.

The United Nations and its partners aim to assist 183 million of the most vulnerable people at a cost of at least US$41 billion.