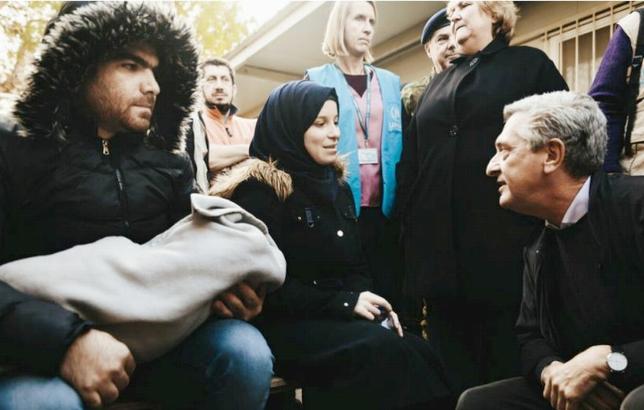 UN High Commissioner for Refugees Filippo Grandi, far right, talks to a family of Syrian asylum-seekers who have recently arrived at the overcrowded Moria Reception and Identification Centre on the Greek island of Lesvos. November 27, 2019 (Photo by Achilleas Zavallis © UNHCR) Posted for media use

ATHENS, Greece, November 29, 2019 (Maximpact.com News) – The UN High Commissioner for Refugees, Filippo Grandi, visited the Reception and Identification Centre in Moria – Lesvos on Wednesday to witness first-hand the human cost of migration policies that have stranded over 39,000 people in overcrowded, dangerous refugee camps.

On the Aegean island of Lesvos, Grandi said he witnessed “extremely disturbing” conditions at the Moria center which now hosts 16,100 asylum seekers – many times over capacity – at facilities designed to house just 3,000 people.

Grandi broadly welcomed the Greek government’s intended measures to alleviate the situation on Lesvos and other affected islands, including a pledge to transfer 20,000 people to the mainland. He urged Greece to accelerate the pace as winter approaches and ensure that proper accommodation and access to services are found on the mainland.

The High Commissioner also welcomed government intentions to speed up asylum procedures. But he warned that faster processes to determine people’s status should not come at the expense of safeguards and standards, saying that the majority of arrivals to Greece this year were refugees, mostly Syrian and Afghan.

The refugees at Moria are from Afghanistan, Iraq, Pakistan, Syria, Yemen, and Somalia. The overcrowded Moria camp was declared “non-manageable” at the end of September and new arrivals were turned away after the number of inhabitants at the camp reached 12,000.

Yet, migrants fleeing for their lives continue to enter Moria. The day after the “non-manageable” declaration was made, another 110 migrants arrived in four boats. Around half of those new arrivals were granted accommodation at the camp while the remainder had to seek a place to sleep in tents outside the camp among olive trees.

A Greek official who spoke with the Associated Press on condition of anonymity, as he is not authorized to speak to the media, said the decision to let some migrants stay in the camp was made after security and municipal services on the Greek island attended a long, intense emergency meeting.

After visiting reception centers for asylum-seekers on the island of Lesvos on Wednesday, Grandi said conditions are becoming increasingly desperate. He called for faster transfers of people to the mainland and expressed particular concern for children, especially those travelling alone.

Urging a collective European solution to better protect them, he said the responsibility of caring for refugees and migrants “should not be left only to Greece.” 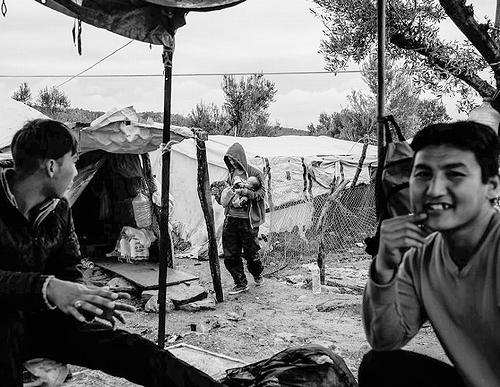 The island of Lesvos has become a natural prison for people who could not live in their homelands and are unwanted in Europe. January 24, 2019 (Photo by Poland’s Ministry of Foreign Affairs) Creative Commons license via Flickr

Grandi later tweeted that he had had a “frank, constructive” talk with Greek Prime Minister Kyriakos Mitsotakis about how to address overcrowding, inadequate services, violence and other challenges on the Greek islands where some 34,300 refugees and migrants are now living in facilities with a combined official capacity of roughly 5,400.

The Greek government last week announced plans to close reception centers on Lesvos, Samos and Chios, and replace them with closed facilities, but most residents are too concerned with the daily struggle to survive to worry about the center’s closure.

Reacting to the High Commissioner’s visit Marion Bouchetel, advocacy officer for Oxfam in Greece, said, “The deteriorating situation faced by people seeking asylum in Greece is jeopardizing their rights and threatening their health, safety and dignity. Right now, most people are not even receiving basic healthcare, while unaccompanied children are left on their own.”

“Meanwhile Greece’s new asylum law is expected to put people in need of international protection at risk of return,” said Bouchetel. “It is therefore critical that the High Commissioner raises these issues to the Greek authorities and the EU during and after his visit.”

Ahead of Grandi’s visit, 17 nongovernmental organizations working in Greece delivered a written statement urging the High Commissioner to address with Greek authorities significant concerns regarding access to asylum procedures, provision of basic services and inadequate protection of children.

The NGO signatories flagged the need for the Greek authorities to implement integration measures and urged the High Commissioner to join Greece’s efforts and actively engage EU Member States in the need for better mechanisms to share responsibility for refugees arriving in Europe.

The organizations are highlighting the “dire and unacceptable reception conditions in the hotspots.”

Since July 2019, thousands of newly arrived asylum seekers don’t have access to the public healthcare system, a situation that puts peoples’ lives at risk.

At the same time, the postponement of the implementation of the law on guardianship (4554/2018) violates children’s rights, as they are left without a guardian to support and protect them at every stage of the reception and legal procedure.

Furthermore, Greece’s new law on international protection, abolishes basic guarantees of the asylum procedure at the first instance and introduces procedural and substantial obstacles that endanger the right to an effective remedy at the second instance, raising concerns about the fairness and effectiveness of the asylum system, as a whole.

At a press conference Thursday to conclude his visit to Greece, the High Commissioner outlined four priority areas he had discussed with the Greek government.

Grandi called for the urgent improvement of living conditions; the tackling of overcrowding on the islands; ensuring an efficient and fair asylum process; and ensuring the protection of 5,000 unaccompanied children now in the country, most of them living in precarious conditions.

“This country needs to turn a page on how this [refugee] movement is handled,” said Grandi, encouraging Greece to address the serious challenges it faces.

Grandi expressed support for the Greek Prime Minister’s plans to enact a new policy to protect refugee and migrant children who are alone in Greece, and urged civil society to play an active role in its implementation.

“There is a children on-the-move emergency in this country,” Grandi said. “You need to make sure, even extra sure, because they are children, that they are properly accommodated in safe places and not exposed to risk.”

Beyond the urgent priorities, Grandi underlined the need for long-term solutions to help refugees integrate into Greek society with the active participation of municipalities and non-governmental organizations.

Through the European Commission-funded ESTIA programme, UNHCR and the Greek government are supporting some of the most vulnerable asylum seekers – many of whom go on to be recognized as refugees – with 25,500 places in apartments across Greece, in partnership with mayors and NGOs. Some 80,000 asylum seekers and refugees receive monthly cash assistance through the same programme. Grandi called on the EU to continue its support for ESTIA at adequate levels in 2020.

Grandi praised the compassion shown by Greek communities which have demonstrated exemplary solidarity and hospitality and said that solutions are also necessary to alleviate the impact on host communities.

He expressed worry about the growth in Europe of anti-refugee sentiments, xenophobic language, and hostility towards refugees and asylum seekers.

“When you have expressed hate, when you have shouted, what have you really achieved? You are left with the problem and you have narrowed the space for real solutions,” he said.

Grandi called on Europe to back Greece’s efforts to strengthen the country’s asylum system, continue to provide resources to Greece, and expand its solidarity measures by opening up relocation places for vulnerable asylum seekers, particularly unaccompanied children.

Grandi said, “I committed to the government to be a strong advocate for Greece in European and international institutions.”