LONDON, UK, November 6, 2019 (Maximpact.com News) – Imagine the joy of driving your zero-emissions electric car for 1,500 miles (2,414 km) without stopping to recharge the battery. Until now that has been impossible for any type of vehicle anywhere in the world, but late last month an ex-British naval officer signed a multi-million-pound deal to produce his revolutionary new type of fuel cell to replace a conventional battery.

Austin Electric, an engineering firm based in Essex, which now owns the rights to use the old Austin Motor Company logo, will begin putting thousands of the new batteries into electric vehicles next year. According to Austin’s chief executive, Danny Corcoran, the new technology is a “game-changer.”

“It can help trigger the next industrial revolution. The advantages over traditional electric vehicle batteries are enormous,” he told the “Daily Mail.” 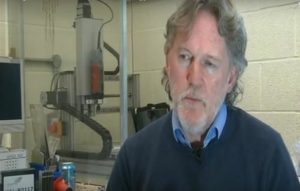 British battery inventor Trevor Jackson in his garage-lab where he invented an efficient aluminum air fuel cell that will power an electric vehicle for 1,500 miles without a recharge. 2019 (Screengrab from BBC video) Posted by Metalectrique for media use

British engineer and former Royal Navy officer Trevor Jackson, 58, from Tavistock, Devon, is a father of eight who still somehow found time to adapt an aluminium-air fuel cell, which stores far more energy than a conventional battery, for use in an electric car.

A more powerful version of Jackson’s aluminum-air fuel cell can also power buses, freight-hauling lorries and aircraft. It’s much simpler and cheaper to make than the batteries currently in use in millions of electric vehicles around the world, and it can more easily be recycled.

Jackson and his company Metalectrique Ltd came up with a prototype a decade ago, but he has faced opposition from auto-industry sceptics who claimed that his technology is unproven, and its benefits exaggerated.

But an independent evaluation by the government agency UK Trade and Investment found in 2017 that it was a “very attractive battery” based on “well established” technology, and that it produced much more energy per kilogram than standard electric vehicle types.

Two years ago, Jackson claims, motor manufacturers lobbied the Foreign Office to bar him from a prestigious conference for European businesses and governments at the British Embassy in Paris, which was supposed to agree a blueprint for ensuring all new cars are electric by 2040.

The bid to exclude him failed. Now, with the signing of the Austin deal, it seems Jackson is at last headed for success.

He has also secured a £108,000 grant for further research from the Advanced Propulsion Centre, a partner of the Department for Business, Innovation and Skills. His technology has been validated by two French universities.

“It has been a tough battle but I’m finally making progress,” says Jackson. “From every logical standpoint, this is the way to go.”

Now on his Metalectrique website, he says, “Métalectrique provides a new method of delivering mobile power; and our power is always CO2-free.”

Jackson began working on new ways of powering electric vehicles after a distinguished engineering career. He worked for Rolls-Royce in Derby, helping to design nuclear reactors, then took a commission in the Royal Navy, where he served as a lieutenant on board nuclear submarines, managing and maintaining their reactors.

Before founding his own firm in 1999, he was working for BAE Systems, where he first started looking at alternative, green ways to power vehicles.

In 2001 he began to investigate the potential of a technology first developed in the 1960s. Scientists had discovered that by dipping aluminium into a chemical solution known as an electrolyte, they could trigger a reaction between the metal and air to produce electricity.

At that time the method was useless for commercial batteries because the electrolyte was extremely poisonous, and caustic.

After years of experimentation at his workshop in the Cornish village of Callington, Jackson’s moment of discovery came when he developed a new formula for the electrolyte that was neither poisonous nor caustic. 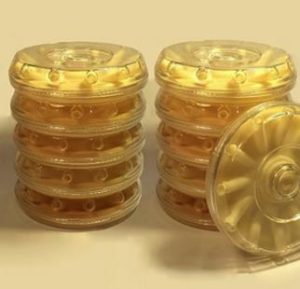 “I’ve drunk it when demonstrating it to investors, so I can attest to the fact that it’s harmless,” Jackson says.

Another problem with the early version of the fuel cell was that it worked only with totally pure aluminium, which is very costly.

But the electrolyte Jackson uses today works with much lower-purity metal including recycled drinks cans. The formula, which is top secret, is the key to his device.

Technically, it should be described as a fuel cell, not a battery. Either way, it is so light and powerful that it could now be set to revolutionize low-carbon transport, because it supplies so much energy.

Following the late October deal with Austin, several immediate projects are about to go into production. The first is to manufacture three-wheeler taxis called tuck-tuks for the Asian market and another is to make electric bikes, which will be cheaper and run for much longer than other brands.

The firm is also to produce kits to convert ordinary petrol and diesel cars into hybrids by fitting them with aluminium-air cells and electric motors on the rear wheels.

A driver can choose to run the car on fossil fuel or on electricity. The cost of each conversion, Jackson says, will be about £3,500, and they will be available early next year.

According to Métalectrique’s website, the aluminum-air fuel cell system produces more energy than lithium-ion batteries in a much smaller and lighter package. In larger vehicles with room for larger batteries, the mileage could increase.

Accredited tests have shown that, weight for weight, Jackson’s fuel cell produces nine times as much energy as lithium-ion: nine times as many kilowatt hours of electricity per kilogram.

The luxury electric car maker Tesla says its model S has a range of 370 miles from one charge. Jackson says that if you drove the same car with an aluminium-air fuel cell that weighed the same as the lithium-ion battery, the range would be 2,700 miles.

Jackson has also developed an even more powerful system that has potential applications in defense, aircraft propulsion and high-power vehicles, he told the “Daily Mail.”

Not only could this technology be cheaper and easier for drivers that the lithium-ion batteries in most EVs today, it creates zero emissions at the vehicle level, and the battery’s key material, aluminum, is widely available and can be recycled indefinitely.

With a battery swapping system similar to that used with propane tanks, it would not require new fueling infrastructure, as electric or hydrogen fuel cell vehicles do.

But the promise of powering transportation through aluminum-air batteries still must deal with potential environmental pitfalls.

While aluminum is abundant, mining it is still hard on the environment, and the smelting process is energy intensive.

Metaectrique’s website points out, however, that many smelters are powered by renewable energy sources like hydro, geothermal or nuclear, and Jackson is looking toward potential innovations in the smelting process that could make aluminum production cleaner.