Rohinga Refugees Had So Little, Now They Have Less

DHAKA, Bangladesh, March 24, 2021 (Maximpact.com News) – Fire swept through three locations in the world’s largest refugee camp in Cox’s Bazar, Bangladesh on Sunday leaving 15 Rohinga refugees dead and more than 560 others injured. Bangladeshi authorities, aid agencies and refugee volunteers rushed to respond when the fire broke out and are now hastening to meet the most urgent needs of those displaced for a second time. 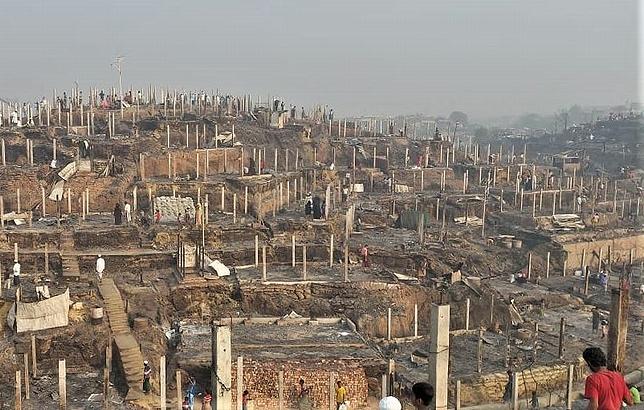 Rohinga refugees from Myanmar watch as a giant blaze destroys thousands of shelters at the world’s largest refugee camp in Cox’s Bazaar. March 21, 2021 (Photo courtesy UNHCR) Posted for media use

Bangladeshi and United Nations authorities estimate that 400 people are still missing and some 45,000 refugees lost their shelters and all their belongings in the devastating blaze. Children are among the injured and many have been separated from their families.

At least 10,000 shelters are thought to have been destroyed or damaged in the blaze, and figures are expected to climb in as assessments continue. “That means at least 45,000 people are being displaced and for whom we seek now provisional shelter,” said Johannes van der Klaauw, UNHCR Representative in Dhaka at a press briefing Tuesday.

Two nutrition centers and a food distribution center run by the UN World Food Programme, and the largest health clinic in the camp run by the International Organization for Migration (IOM) also burned to the ground.

“This disaster is a terrible setback that exacerbates the humanitarian needs of refugees in Cox’s Bazar,” said IOM’s Director General António Vitorino.

In support of the ongoing response led by the Bangladeshi authorities, UNHCR, the IOM, and other UN and nongovernmental partners as well as refugee volunteers, are  providing medical supplies and emergency first aid, including psychosocial support.

UNHCR is preparing to reissue registration documents to those who lost theirs in the fire,” van der Klaauw said. So far, UNHCR has provided some 3,000 blankets, 14,500 solar lamps, 10,400 kitchen sets and 11,500 mosquito nets. 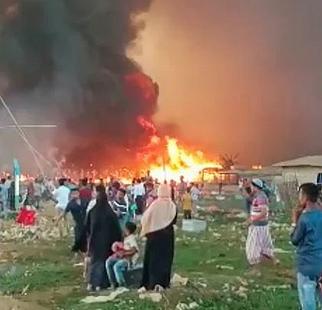 Together with Oxfam, UNHCR has made available emergency water and sanitation assistance, including construction of 20 emergency latrines, emergency tap stands, water tanks, jerry cans and water purification tablets. Four water tankers are delivering safe water to areas where those displaced by the fire are congregating.

Using UNHCR’s Interactive Voice Response system, the agency can call 70 percent of households in the most affected camps. UNHCR teams are monitoring the safety and security of temporary shelters for those displaced, and ensuring assistance meets the critical needs including for unaccompanied and separated children.

Bangladeshi officials have begun to investigate the cause of the massive fire.

Sanjeev Kafley, the International Federation of Red Cross and Red Crescent Societies’s delegation head in Bangladesh told Reuters news agency, “I have been in Cox’s Bazar for three and a half years and have never seen such a fire. These people have been displaced two times. For many there is nothing left.”

“This tragedy is an awful reminder of the vulnerable position of Rohingya refugees who are caught between increasingly precarious conditions in Bangladesh and the reality of a homeland now ruled by the military responsible for the genocide that forced them to flee,” the NGO Refugees International said in a statement.

“Even as long-term solutions remain elusive, the government of Bangladesh – assisted by international donors and humanitarian actors – must sustain assistance and seek to improve conditions as long as Rohingya refugees are forced to remain in exile,” Refugees International said.

Sunday’s massive blaze was by no means the first in the Cox’s Bazaar camps. It happens time and again, For instance, on January 15, a fire erupted in the Nayapara refugee camp destroying about 550 shelters, 150 shops and a community center.

No one was killed in that fire, but about 3,500 Rohingya refugees, including children, lost their homes and belongings in the middle of winter and the coronavirus pandemic, UN agencies said.

The predominantly Muslim Rohingya were denied citizenship in 1982 by the government of Myanmar, which sees them as illegal immigrants from Bangladesh. Myanmar’s official state policies restrict Rohingya in their ability to marry, travel, have children, access medical care, and attend schools.

The estimated 600,000 Rohingya who remain in Rakhine State are subject to government persecution and violence, confined to camps and villages without freedom of movement, and cut off from access to adequate food, health care, education, and livelihoods, according to the nonprofit Human Rights Watch.

UNHCR 2021 appeal for Rohingya response totaling US$294.5 million is currently only 16 percent funded. The effects of Monday’s lethal and destructive blaze will only exacerbate critical needs and further strain already overstretched resources.

UNHCR is appealing for urgent mobilization of government and private sector donors. The UN agency says their timely contributions are critical for the ongoing humanitarian response and UNHCR’s capacity to protect and assist both the Rohingya refugees and their Bangladeshi hosts.