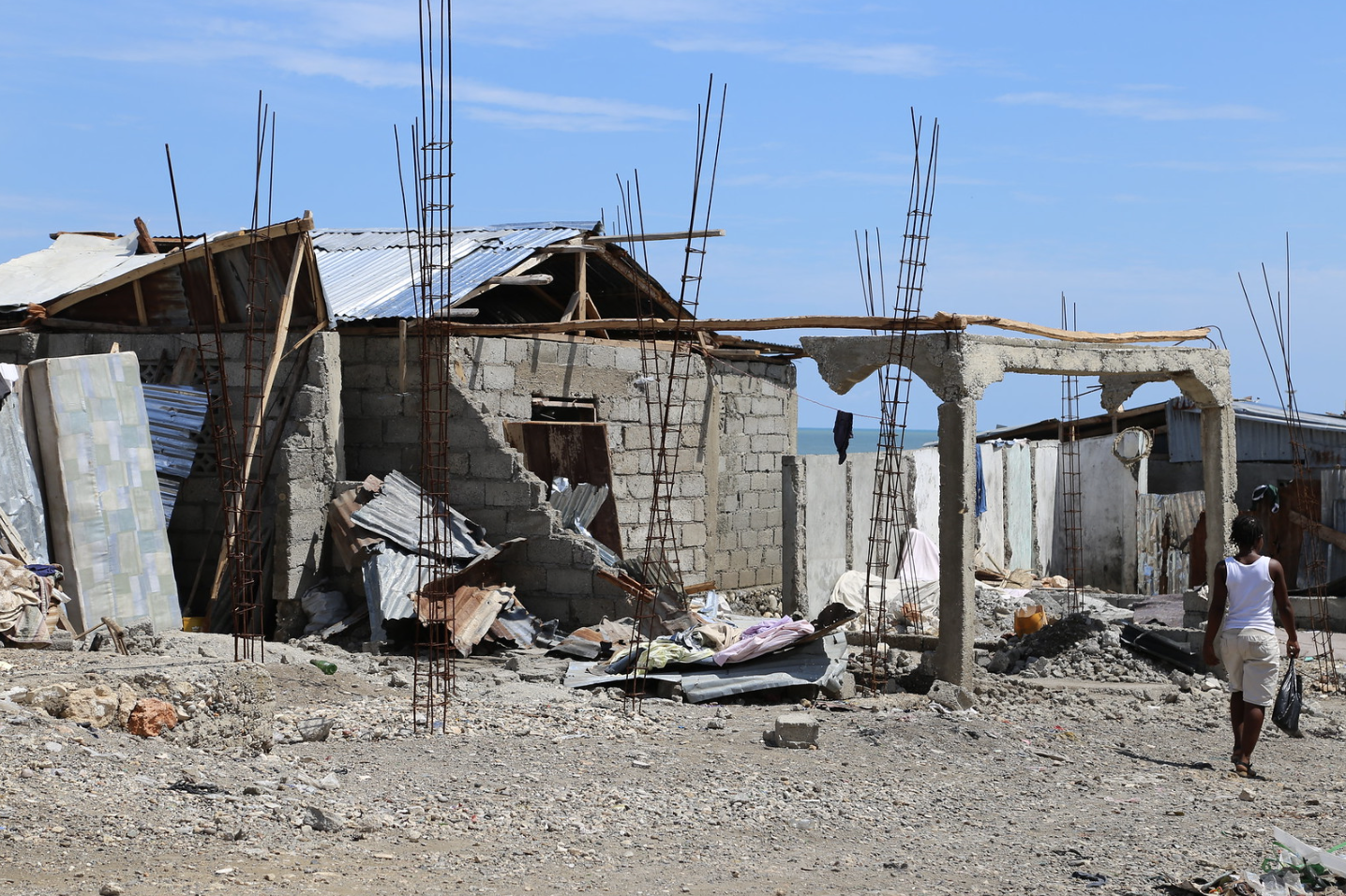 Hurricane Matthew did great damage to the coastal town of Jérémie, Haiti. Some of the worst hit areas were coastal communities like this one. October 14, 2016 (Photo by Nicole Robicheau, International Federation of Red Cross) Creative Commons license via Flickr

BATH, United Kingdom, June 14, 2020 (Maximpact.com News) – Harnessing the sun to bring mobile desalination units that make fresh drinking water to remote and disaster-struck communities will be possible within five years, say researchers at the University of Bath. They have developed a revolutionary desalination process that can be operated by mobile, solar-powered units.

The process is low cost, low energy and low maintenance, and has the potential to provide safe potable water to communities where fresh water is in short supply.

“This amounts to a whole new process for removing salt from water,” said Professor Frank Marken <https://people.bath.ac.uk/fm202/>who teaches in the University of Bath’s Chemistry Department. “We are the first people to use tiny micron-sized diodes in a desalination prototype.”

The prototype desalination unit is a 3D-printed system with two internal chambers designed to extract and/or accumulate salt.

The flow can take place in one direction only due to a mechanism that has parallels in mobile phone technology. As a result of this one-way flow, salt is pumped out of seawater.

This contrasts with the classical desalination process, where water, rather than salt, is pumped through a membrane.

Water scarcity already affects every continent. Over the last century, water use has been growing globally at more than twice the rate of population increase, according to UN Water <https://www.unwater.org/water-facts/scarcity/>. An increasing number of regions are reaching the limit at which water services can be sustainably delivered, especially in arid regions.

According to UN estimates in 2018 over two billion people live in countries experiencing high water stress. At least 748 million people around the world – more than twice the population of the United States – are without basic water access. Two billion people, or about one in four, lack access to a toilet or latrine.

Water scarcity is both a natural and a human-made phenomenon. There is enough freshwater on the planet for seven billion people but it is distributed unevenly and much of it is wasted, polluted and unsustainably managed.

Desalination, which turns seawater into fresh water, has become an essential process for providing drinking and irrigation water where freshwater is scarce. Typically, it has been an energy-intensive process carried out in large industrial plants.

Professor Marken said, “Large industrial water plants are essential to 21st Century living, but they are of no help when you’re living in a remote location where drinking water is scarce, or where there is a coastal catastrophe that wipes out the fresh water supply.”

“There are times when it would be enormously beneficial to install small, solar-powered desalination units to service a small number of households,” explained Marken.

The Bath desalination system is based on ionics. This is a process in which a cationic diode, a negatively charged, semi-permeable membrane studded with microscopic pores, is combined with an anionic resistor, a device that only allows the flow of negative ions when power is applied.

Marken explained, “This is a low-energy system with no moving parts. Other systems use enormous pressures to push the water through nano-pores, but we only remove the salts. Most intriguingly, the external pumps and switches can be replaced by microscopic processes inside the membrane – a little bit like biological membranes work.”

Another benefit of the Bath desalination unit is that it also allows for the opposite process – the up-concentration of salt – which minimizes waste.

The separated salt can be crystallized and then used as a food supplement or a de-icer.

Most other desalination processes pump salt in the form of brine back into the sea, polluting the marine ecosystem. This process requires costly pumping systems and must be managed carefully to minimize damage to marine ecosystems.

If all goes well, Professor Marken believes his department could roll out a working mobile desalination unit within five years. But first, the team needs to find more robust materials as well as collaborators to help refine the invention and scale it up.

The proof-of-concept prototype is currently able to remove 50 percent of the salt from a saltwater sample, but to make seawater drinkable, the salt content must be reduced by at least 90 percent.

Budi Riza Putra, the University of Bath Chemistry doctoral candidate who led the project, said, “We need to find new and better porous materials capable of pumping ions. Membrane thickness, pore number and pore diameter must all be optimized. We hope to find materials experts who can help us with this.”

In their quest to find new membranes, the researchers have turned their attention to biological materials such as bacteriophages, viruses that infect and replicate within bacteria, to create a film capable of separating salt from water.

Along with Dr. Katarzyna Szot-Karpińska and her group at the Polish Academy of Sciences <http://pan.pl/> in Warsaw, the Bath University researchers believe they are the first to successfully use bacteriophages in desalination.

“Our bacteriophage (named M13) looks like spaghetti but is one million times smaller,” explains Putra. “If we make conditions a little acidic, the nano-spaghetti strands stick together, creating a thin film with tiny holes. When we tested this material as a membrane for desalination, we found it worked – it started acting as a diode, pumping ions in one direction only.” 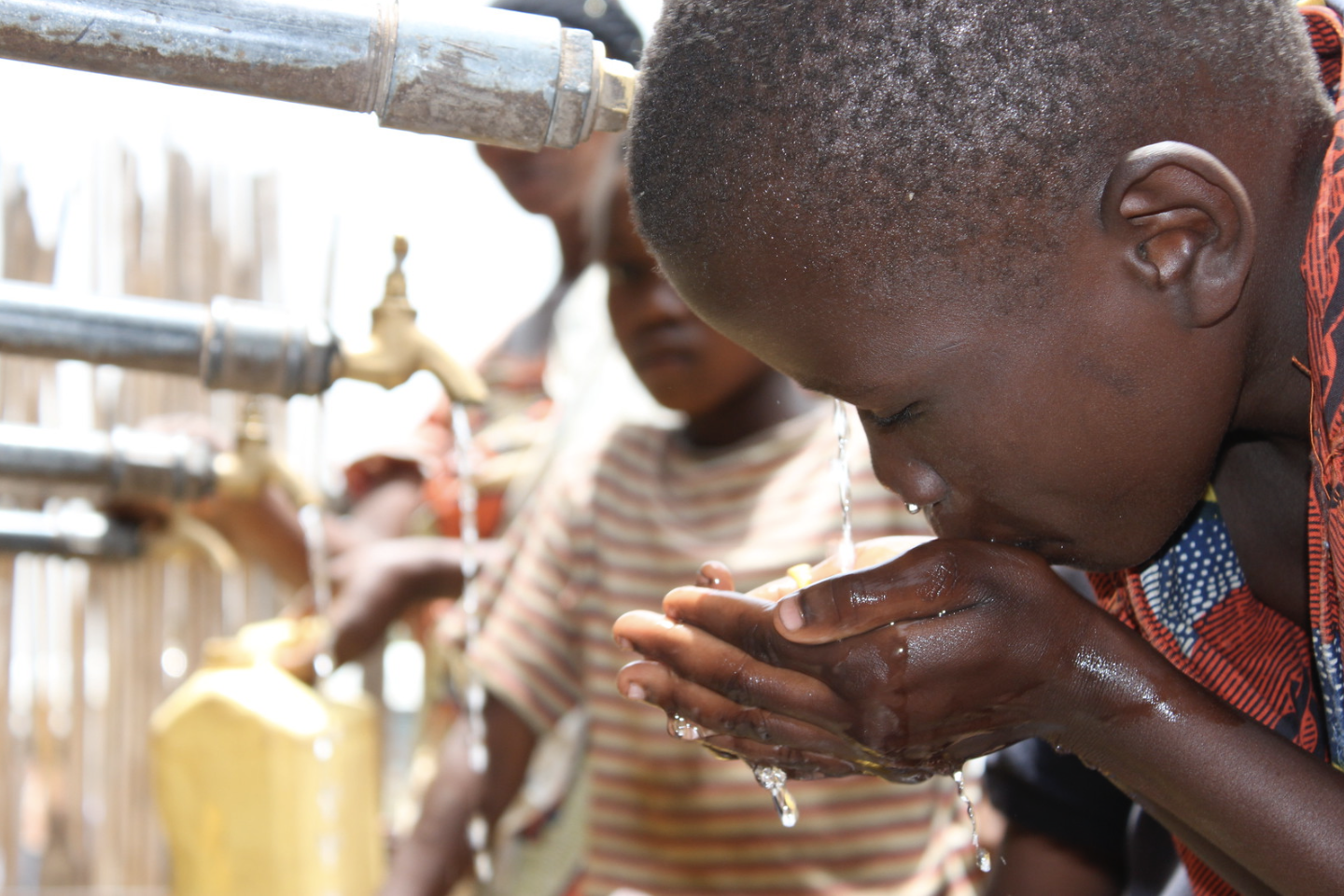 Boys drink water in a remote village in the Province Orientale, Democratic Republic of the Congo. Oxfam is a key provider of basic water infrastructure in this province where State presence, let alone basic services, is limited. The new desalination process could be useful in such remote locations. March 28, 2011 (Photo by Oistein Thorsen courtesy Oxfam) Creative Commons license via Flickr

Putra said, “Before us, no one thought about using viruses as membranes for water desalination.”

Yet, while M13 shows potential as a membrane pump for water desalination, it is not perfect. “The substrate disintegrates as salt concentrations rise and at neutral pH,” explains Marken. “So, either we find a way to improve the semi-permeability of the bacteriophage material or we must find other, more robust ionic diode membrane alternatives.”

To view the study, “An AC-driven desalination/salination system based on a Nafion cationic rectifier,” click here. <https://www.sciencedirect.com/science/article/pii/S0011916419321940>