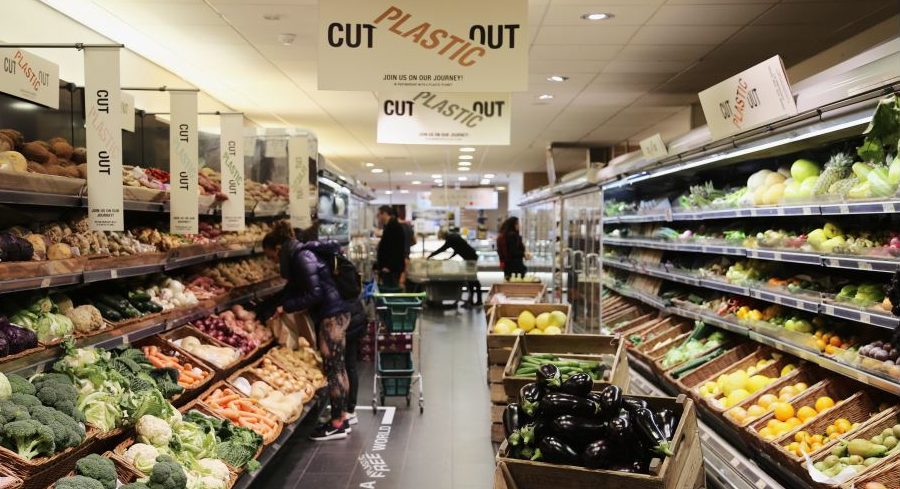 The zones are stocked with everything from fresh fruit and vegetables to bread, cheese and wild game such as squirrel and wild boar, as well as packaged food and drink products.

The products showcase a wealth of innovative plastic-free materials such as beechwood nets, pulp, paper, metal, glass, cellulose and cartonboard.

Signage and shelf talkers tell shoppers about the packaging to encourage them to make plastic-free choices. The zones are identified by plastic-free branding signs created by London design studio Made Thought.

The British nonprofit A Plastic Planet, a social impact movement for change, worked in partnership with Thornton’s Budgens to create Plastic Free Zones.

Sian Sutherland, A Plastic Planet co-founder, said, “Plastic is totally nuts. Thornton’s Budgens are disrupting the market and showing that wrapping something as fleeting as food in something as long-lasting as plastic is the definition of madness.”

“In just 10 weeks the store has removed plastic packaging from more than 1,500 products, finally giving their customers the choice they want,” said Sutherland. “While big retailers claim it will take 10 years to create real plastic-free change, Thornton’s Budgens has shown that we can start to wean ourselves off plastic in 10 weeks.”

A Plastic Planet has called for an urgent transformation of the UK’s entire approach to waste management. Their goal is to inspire everyone to turn off the flow of plastic.

Andrew Thornton, Thornton’s Budgens Founder, said, “As the community supermarket that really cares, we believe in taking a strong stance on major issues that affect our wellbeing and our planet.”

“The issue of plastic is one that can no longer be ignored so we’ve chosen to be the first mainstream supermarket in the UK to introduce Plastic Free Zones. This means our customers will be able to do a comprehensive shop without the need to use any plastic packaging.”

“Our aim is to show the big supermarkets that it is not as difficult to go plastic-free as they think,” said Thornton. “If we with our limited resources in 10 weeks can introduce more than a thousand plastic-free products just imagine what the major chains could achieve.”

A Plastic Planet is calling for the Conservative minority government of Theresa May to use the new UK plastics tax to fund a national infrastructure that mandates both recycling and composting.

On October 30, the May Government announced a tax on plastic packaging. The tax will apply to any business that produces or imports plastic packaging that does not contain at least 30 percent recycled content.

The government proposed the new tax in its autumn budget. Revenues from the tax will be used to address single-use plastics, waste and litter.

In addition, the UK announced 20 million pounds in funding to increase recycling and combat plastic waste.

The announcement follows the UK’s ban on plastic straws, drink stirrers and cotton buds as part of a growing effort to decrease the country’s plastic pollution and protect its rivers and seas. These single-use items are only used for a few minutes but take hundreds of years to break down.

The government says the ban on plastic straws, drink stirrers and cotton buds follows its success in charging for single-use plastic bags, which has resulted in an 86 percent decrease in plastic bag distribution in supermarkets.

Plastic-free shops are popping up elsewhere too.

The world’s first plastic-free supermarket aisle was unveiled in Amsterdam, Netherlands in February.

With nearly 700 plastic-free goods to select from at one of the branches of Ekoplaza, a Dutch supermarket chain, the aisle gives shoppers the opportunity to buy their groceries in “new compostable bio-materials as well as traditional materials” such as glass, metal and cardboard.

Sutherland said the aisle is “a symbol of what the future of food retailing will be.”

“We totally understand what we’re asking for is highly inconvenient – it’s difficult,” she told CNN. “However, it’s indefensible for us to continue to wrap up our perishable food and drink in this indestructible material of plastic. So everybody knows now that progress has to be made.”

Ekoplaza, which has 74 stores across the Netherlands, intends to introduce the plastic-free aisle across all its branches.

In Vancouver, the first package-free grocery store in Canada, Nada, was incorporated in 2015 after marine biologist Brianne Miller had an idea that would completely change her relationship with food.

Miller had seen firsthand the masses of harmful plastic swirling around in ocean gyres, much of it food packaging waste. She realized that even the most ethical, local, and organic stores were still caught in a cycle of waste. So, she created Nada – a different kind of store – with no plastic packaging at all. 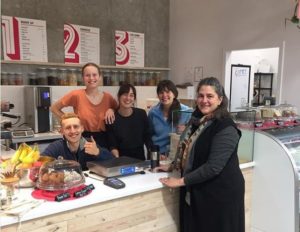 Nada operated with just pop-up shops for the first two years, then launched its first retail store in 2017.

Customers bring their own containers to stock up on local, fresh, responsibly-sourced, and organic groceries and personal care items. They use Nada’s digital smart scales to weigh and label their purchases and automatically deduct the weight of the containers.

Not only do shoppers reduce their packaging waste, they waste less food by buying only what they need. This saves them money – an average of C$1,500 per family per year, Nada claims.

On october 22, Nada opened a waste-free cafe at the store and in the first two weeks diverted 950 single-use containers/paper bags and 740 disposable cups from the waste stream.

“You can get basically anything you need like at a grocery store or supermarket, but all package free,” says Maya Goodwill, a Bare Market spokesperson.

Founder Dayna Stein was inspired to launch Bare Market while living in Vancouver, where she shopped at the city’s first refill shop, The Soap Dispensary.

Bare Market encourages shoppers to bring their own containers. If people forget their containers, they can purchase them from Bare Market, or borrow a reusable container for a refundable fee.

Bare Market hopes to open a permanent location in 2019. Until then, they’ll be popping up all over Toronto.

Zero-waste shops are catching on all across the United States. Celia Ristow, the co-founder of the grassroots group Zero-Waste Chicago, has started the website Litterless, which features a state-by-state directory of U.S. grocery stores featuring foods in bulk that permit shoppers to bring their own packaging.

On her blog, Ristow speaks of the joys of plastic-free living, “The most unexpected benefit of zero waste for me has been how much it has meant learning to lean on myself, my friends, and my community, and how much doing so has improved my life. So much of what is sold to us as convenience can have the effect of encouraging us to believe we can’t do things for ourselves, that the things we need can only be found in stores. Choosing to try to buy less and to waste less means taking back some of that power.”