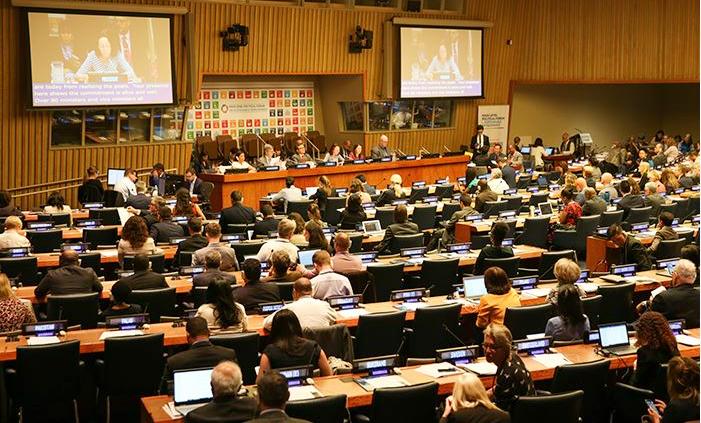 NEW YORK, New York, July 10, 2018 (Maximpact.com News) – “It is literally the truth, that sustainable development is the path to happiness,” Professor Jeffrey Sachs, director of the Center for Sustainable Development at Columbia University, told this year’s meeting of the High-level Political Forum on Sustainable Development (HLPF) that opened on Monday at UN Headquarters in New York.

In the days between now and July 18, the HLPF will bring together more than 1,000 government, business and civil society leaders. More than 80 ministers and vice‑ministers will be attending the Forum, as well as 2,500 no‑state actors.

They will evaluate the progress made by dozens of countries towards the 17 Sustainable Development Goals (SDGs) – unanimously adopted by the United Nations’ 193 Member States in 2015 – to determine what is and what is not working, based on UN Secretary-General António Guterres’ annual progress report.

HLPF is the official forum to review progress towards the goals, and, under the theme, “Transformation towards sustainable and resilient societies,” this year’s Forum focuses on six of the 17 goals: SDGs 6 (water), 7 (energy), 11 (cities), 12 (consumption and production), 15 (terrestrial ecosystems), and 17 (partnership).

During the 2018 Forum, 47 countries are sharing their experiences, including the successes, challenges and lessons learned.

“The goals are this generation’s only hope for creating peaceful, safe, fair and sustainable societies,” said Sachs. “We have to make them work, but the biggest obstacle is greed.”

Sachs told of the greed and vested interests of coal, oil and gas companies, and he called out the global food industry’s unsustainable supply chains and unhealthy products.

Citing parallel sustainable development and happiness rankings, Sachs observed that the list of the top 10 countries closest to achieving the goals mirrors a complementary ranking of the world’s happiest countries.

He called on rich countries and individuals to address the gap of US$200 billion in financing to achieve the SDGs, by:

Sachs said that there are enough resources in the world for everyone to live free of poverty and it should not require a big effort on the part of large developed countries, to profoundly help those struggling in poverty.

Most important is quality education, declared Sachs, followed by universal access to health care, clean energy “without which the planet will be wrecked,” sustainable land and food, smarter cities with decent infrastructure, and proper use of digital technologies.

The aim is to ensure that every child has a future. Otherwise, he said, “we don’t have a future.”

He said Sweden is the country most on course to achieving the SDGs, and that Europe is to date “by far” the region doing the best.

The happiest countries are the ones that tax themselves the most, he said, pointing out that Swedes think it is a good thing to pay half their national income to finance quality education and healthcare.

As the trends data show, Sweden is making progress towards achieving the goals, but it’s not on track to meet the climate SDG 13 or to make land-use and food systems sustainable (Goals 2 and 14).

Forum participants say progress has been made on achieving the goals of ending poverty and hunger, but meeting the targets by the 2030 deadline will require more effort.

“It will require policy makers’ unwavering attention, a laser-sharp focus on implementation of these goals, and a true sense of urgency,” said Liu Zhenmin of China, the UN Under-Secretary-General of Economic and Social Affairs.

“We have only 12 more years to fully realize this transformative agenda, but these goals are absolutely within our reach,” he told the conference.

Introducing the UN Secretary‑General’s report on progress towards the Sustainable Development Goals , Liu cited gains in lowering maternal and child mortality and challenges such as climate change consequences and conflict that are obstructing progress.

He pointed out that few developing countries have fully funded statistical plans and the share of official development assistance for statistics has been just 0.3 percent since 2010. Liu said “to understand accomplishments and setbacks and chart our way forward, we need reliable, timely, open and disaggregated data to inform all our actions.”

“It has been three years since world leaders committed to end poverty and hunger, to protect our planet, to foster peaceful societies, and to unleash economic, social and technological progress – and in implementing this vision they committed to reach those furthest behind,” Liu said.

For the first time in more than a decade, there are now approximately 38 million more hungry people in the world, rising from 777 million in 2015 to 815 million in 2016.

According to the Secretary‑General’s report, conflict is now one of the main drivers of food insecurity in 18 countries.

In 2017, a record 68.5 million people around the world have been displaced by persecution, conflict and mass atrocities.

Also in 2017, the world experienced the costliest North Atlantic hurricane season on record, driving the global economic losses attributed to disasters to over $300 billion.

Yet many people are living better lives than they were a decade ago, even in regions facing the greatest development challenges, the Index shows.

The proportion of the world’s workers and their families now living below the extreme poverty line has dropped from 27 percent in 2000 to nine percent in 2017, Liu noted.

“However, drought and disasters linked to climate change, and surging conflicts in parts of the world, are hindering faster progress,” Liu warned.

ECOSOC President Marie Chatardová of the Czech Republic, who is chairing the meeting, said that achieving the goals requires more than just the “dedication and good will” of governments.

“We explored how civil society, the private sector, academia and other actors can help move the SDGs forward,” she said.

Chatardová said she expects that the Declaration, an outcome document to be adopted at the end of the Forum, will present a strong political message on the international community’s unwavering commitment to realize the aspirations of the 2030 Agenda.