Pima Point along Hermit Road on the South Rim of Grand Canyon National Park is one of the best places on the rim to see and hear the Colorado River. The paved Greenway Trail continues from here towards Hermits Rest, allowing bicyclists and visitors in wheelchairs to share the path with pedestrians. (Photo by Michael Quinn / National Park Service) Public domain.

NEW YORK, New York, December 22, 2016 (Maximpact.com News) – 2017 is the International Year of Sustainable Tourism for Development, the UN General Assembly has declared, but as Donald Trump takes over the helm of the United States with his natural resources extraction agenda, and the European Union gets used to the idea of life without Great Britain, can sustainable tourism thrive?

Luxury doesn’t have to cost the Earth, yet development often means altering beyond recognition the very sites to which visitors are attracted.

UNESCO maintains a list of World Heritage Sites in Danger. It lists many sites throughout the troubled Middle East. And, the United States, which environmentalists fear is soon to be plundered by President-elect Trump and his rapacious Cabinet, already has two World Heritage Sites on the list

Florida’s 1.5 million acre Everglades National Park has suffered damage due to Hurricane Andrew, and deterioration of water flow and quality due to agricultural and urban development has placed the Everglades in danger, and there has been continued degradation of the site resulting in a loss of marine habitat and decline in marine species, UNESCO warns.

But now Yellowstone is endangered by sewage leakage and waste contamination in parts of the park; potential threats to water quantity and quality, past and proposed mining activities, and a proposed control program to eradicate brucellosis in the bison herds.

As President Barack Obama, the president who has designated 23 national monuments, more than any other president to date, prepares to leave the Oval Office on January 20, he is considering at least one more.

Obama could designate a national monument around Grand Canyon National Park, a hot button issue in the Southwest.

One of the world’s great wonders, the Grand Canyon is protected from new uranium mining claims under an Obama-era withdrawal only through 2032.

In the event that Obama does not create a monument to further protect the Grand Canyon, U.S. Congressman Raul Grijalva of Arizona, a Democrat and Ranking Member of the House Natural Resources Committee, hopes to do so through Congress.

Grijalva was joined by tribal leaders from across Northern Arizona in October 2015 to introduce the Greater Grand Canyon Heritage National Monument Act.

Arizona Wildlife Federation president Brad Powell said there could be movement on the legislation before Trump’s Inauguration Day.

Trump has said that as president he will sell off U.S. federal assets to pay down the national debt, and his administration, backed by the Republican Congress, is likely to remove protections from some of the public lands precious to visitors.

But in the United States, as well as in many other countries, the movement towards sustainable tourism has gone too far to be undone.

To help visitors find sustainable destinations in the United States, the Earth Day Network has partnered with Google for the launch of the new Google Maps Summer of Green, an environment-focused video and map guide to eco-tourism spots, including spas, hotels and restaurants. Google Maps Summer of Green enables users to discover green travel options by featuring guided virtual video tours of environmentally friendly destinations such as nature museums and horseback riding outposts.

Just to the south, Mexico Tourism Board used the UN’s Conference of the Parties to the Convention on Biological Diversity , held December 2-18 in Cancun, as the launching pad for a new campaign focused on the country’s biodiversity and its wealth of nature, culture and gastronomy.

Biodiversity is part of Mexico’s identity and is recognized abroad as one of its most emblematic characteristics, as well as one of the primary reasons why tourists visit the country. Visitors to Mexico can encounter 564 species of mammals, more than 1,000 species of birds, 864 reptile species and 376 amphibians, as well as over 23,000 types of plants.

Lourdes Berho, Mexico Tourism Board’s CEO, said at the launch, “As global travel trends suggest, travelers are seeking destinations that are rich in biodiversity and sustainability. As the fourth most mega biodiverse country in the world, Mexico is the perfect place for those looking to immerse themselves in authentic cultural, culinary and nature-filled experiences. We believe that what travelers are looking for lives in Mexico, and this is the basis of our campaign.“

“It’s also about helping to support and retain local cultures, economies and environments while traveling. Most people don’t know how easy it is to weave sustainability into the types of trips they already want to take,” said Dunlap.

Available in 42 languages, Booking.com offers over 670,000 hotels and accommodations at more than 79,000 destinations in 212 countries and territories worldwide. It features over 49,000,000+ reviews written by guests after their stay, and attracts online visitors from both leisure and business markets around the globe.

“There are many ways to be a conscientious traveler … without having to sacrifice comfort levels or relaxation,” Dunlap said. “Guests may not realize that as they sleep on organic cotton sheets, washed with water heated by energy generated from the hotel itself, they are staying sustainably. Or that when eating a meal made from ingredients sourced within 20 miles of their accommodation, they are a sustainable traveler supporting local business.“

“Many of the world’s best accommodations already provide these stealthily sustainable amenities to make sure their guests can enjoy all the luxuries of a vacation guilt-free,” he said. “In fact, you might already be a sustainable traveler and not even know it, that’s how seamless sustainable choices in accommodation can be!“

Booking.com points to luxury hotels around the world that glory in their sustainability, such as The Savoy Hotel in London, which has become a pioneer of going green, winning numerous sustainability awards over the past nine years for its innovation in eco-friendly amenities and facilities.

The Rubens at the Palace hotel in London has the largest living wall, erected in an effort to combat the chronic stormwater run-off problem they have been experiencing due to vanishing green spaces. 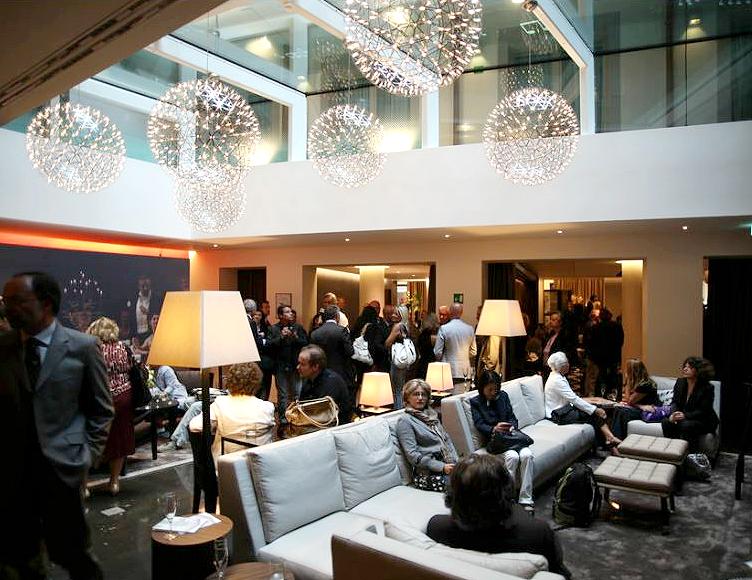 Hotel Milano Scala, a boutique hotel in the heart of Milan, is the first totally eco-sustainable hotel in Milan. Its 62 rooms and suites are dedicated to music, culture and sustainability. (Photo by Bruno Cordioli) Creative Commons license via Flickr.

Visitors increasingly appreciate such efforts. A 2015 study by Booking.com found that 52 percent of travellers are likely to choose a destination based on its environmental impact, and that travellers are three times as likely to plan to stay in more green accommodations in 2015 than they did in 2014.

Rachel Dodds of the Canada-based website Sustaining Tourism points to a 2015 study by Expedia finding that almost a third of consumers (29 percent) would be likely to choose one company over another based on their environmental record, up from one in five (19 percent) in 2011.

“There is growing sentiment amongst consumers that it is the travel company’s responsibility to be environmentally responsible,” she said.

Civil society organizations throughout the world are engaging tourists to help protect the environment. For instance, the

Nature Conservancy’s Caribbean Challenge has, to date, designated 50 new marine/coastal protected areas. The aim is to conserve at least 20 percent of their nearshore marine and coastal environments in national marine protected areas by 2020, and to get the 40 million tourists who visit the Caribbean each year to help fund the cause with their donations.

Industry organizations are doing their part in Antalya, Turkey. There, for the first time in Turkey, the Belek Tourism Investors Association, Betuyab, founded in 1988 by investor companies with the leadership of the Ministry of Tourism, are ensuring sustainable tourism in the region.

For sustainability, all existing tourism establishments are connected to three wastewater purification plants. Some of the wastewater is used for irrigation, while the remaining water is completely cleaned and released back into nature.

Worldwide, the appetite for sustainable tourism and the will to satisfy it is growing.

The World Travel and Tourism Council  declares that members of the industry have generally improved their carbon efficiency by 20 percent in the last 10 years.

WTTC head David Scowsill writes in the organization’s latest report, “WTTC promotes sustainable growth for the sector, working with governments and international institutions to create jobs, to drive exports and to generate prosperity.“

WTTC reports that, “Travel and tourism is one of the world’s largest economic sectors, supporting 285 million jobs and generating 9.8 percent of global GDP in 2015.“

The organization reports that the tendency to buy holidays from socially responsible brands appears to be strongest in Asia-Pacific (64 percent), Latin America (63 percent) and Middle East/Africa (63 percent).

Maximpact’s consultant network has a wide range of eco tourism and environmental experts that can assist your organization. Create responsible tourism projects through Maximpact’s Advisory and discover project services for all types of business and organizations. Contact us at info(@)maximpact.com and tell us what you need.