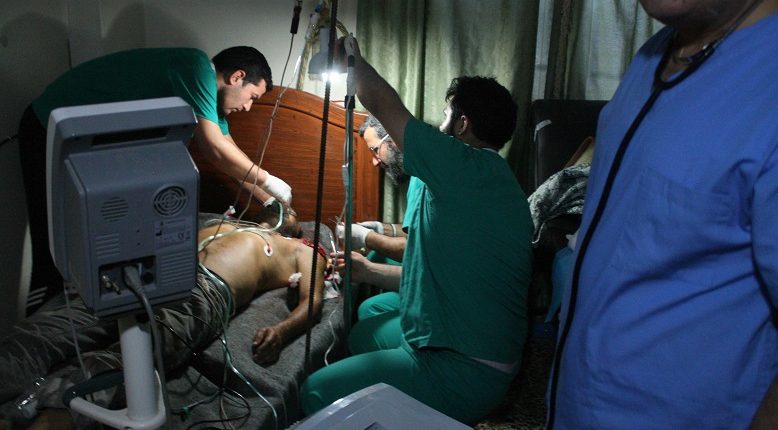 Caption: Medical team works to save a patient at a hospital in the Syrian town of Darat Izza, western Aleppo. March 13, 2020 (Photo courtesy Physicians for Human Rights) Posted for media use

GENEVA, Switzerland, March 31, 2020 (Maximpact.com News) – Wracked by civil war for nine years, Syria is at “high risk” of being unable to contain the coronavirus COVID-19 pandemic, the UN Special Envoy for the country said Monday. In a video conference with UN Security Council members, Geir Pedersen called for a “complete, immediate nationwide ceasefire” to enable an all-out-effort to counter the virus.

“We need the kind of sustained period of calm that a nationwide ceasefire would ensure because we need cooperation to take place across the front lines that riddle Syria’s territory. And this is needed not tomorrow, but now,” said Pedersen, a Norwegian who has served as his country’s ambassador to China and to the United Nations.

Syria is just now beginning its fight against the coronavirus and the deadly disease it causes, COVID-19. The first death caused by the virus was announced by the Syrian Health Ministry on Sunday – a woman who had COVID-19 died after being hospitalized.

The Health Ministry announced Monday that a second person has died of the virus in Syria. “A second death case of the coronavirus was registered today, it is one of the 10 cases detected in Syria,” the Ministry said in a statement.

Since the novel coronavirus emerged in Wuhan, China in late December 2019, there are 719,700 confirmed COVID-19 cases across the world and 33,673 people have died in 202 countries, areas or territories, according to the latest figures from the World Health Organization (WHO).

In Syria, years of conflict have degraded or destroyed the healthcare system, the UN envoy pointed out. Pedersen stressed that that the virus does not distinguish between people who live in government-controlled areas or outside. “It endangers all Syrians,” he said.

Given large scale population movements, dangerously cramped conditions in multiple camps for the internally displaced, informal settlements, and places of detention, Pedersen expressed his concern that “Syria is at high risk of being unable to contain the pandemic.” 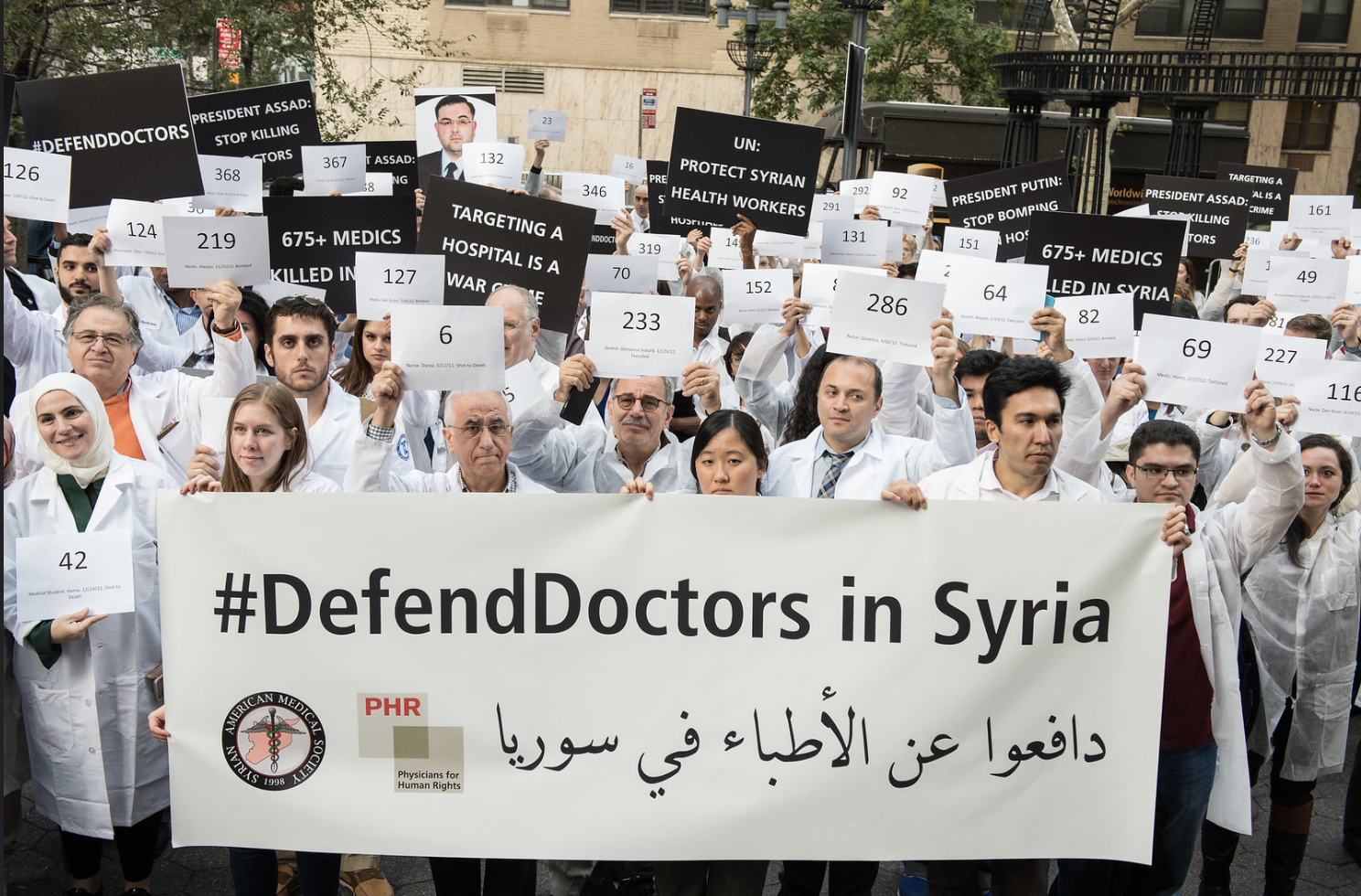 Caption: Medical personnel have been demanding protection for doctors in Syria for years, now this protection is critical to keep the deadly coronavirus from spreading. Here, supporters demand an end to the bombing of hospitals in Syria at a die-in to defend Syrian health professionals, November 4, 2015 (Photo by Michael Hnatov courtesy Physicians for Human Rights) Creative Commons license via Flickr

Moreover, weak or absent governance, a hollowed-out health system, and shortages of health professionals, medical equipment and supplies add to the crisis, he emphasized.

While recognizing that ceasefire agreements in the northeast broadly continue to hold, the Pedersen maintains that the current arrangements are far from ideal for the frontline response demanded by the COVID-19 outbreak.

Pedersen expressed his readiness to work with the Syrian government, the opposition, all relevant players on the ground, and key countries with influence, to support a scaling-up of action in a bid to ensure the ceasefire holds.

“It will not be easy, and there are no guarantees,” he said, “but the Syrian people desperately need everyone to focus on their welfare now.”

He concluded with the hope that if key players engage with UN appeals, everyone can “work urgently in a common effort.”

“This, in turn, would definitely help in the effort on the political track to implement Security Council resolution 2254,” he said, which calls for a ceasefire and political settlement in Syria.

“I am convinced this is the only way forward,” Pedersen said. 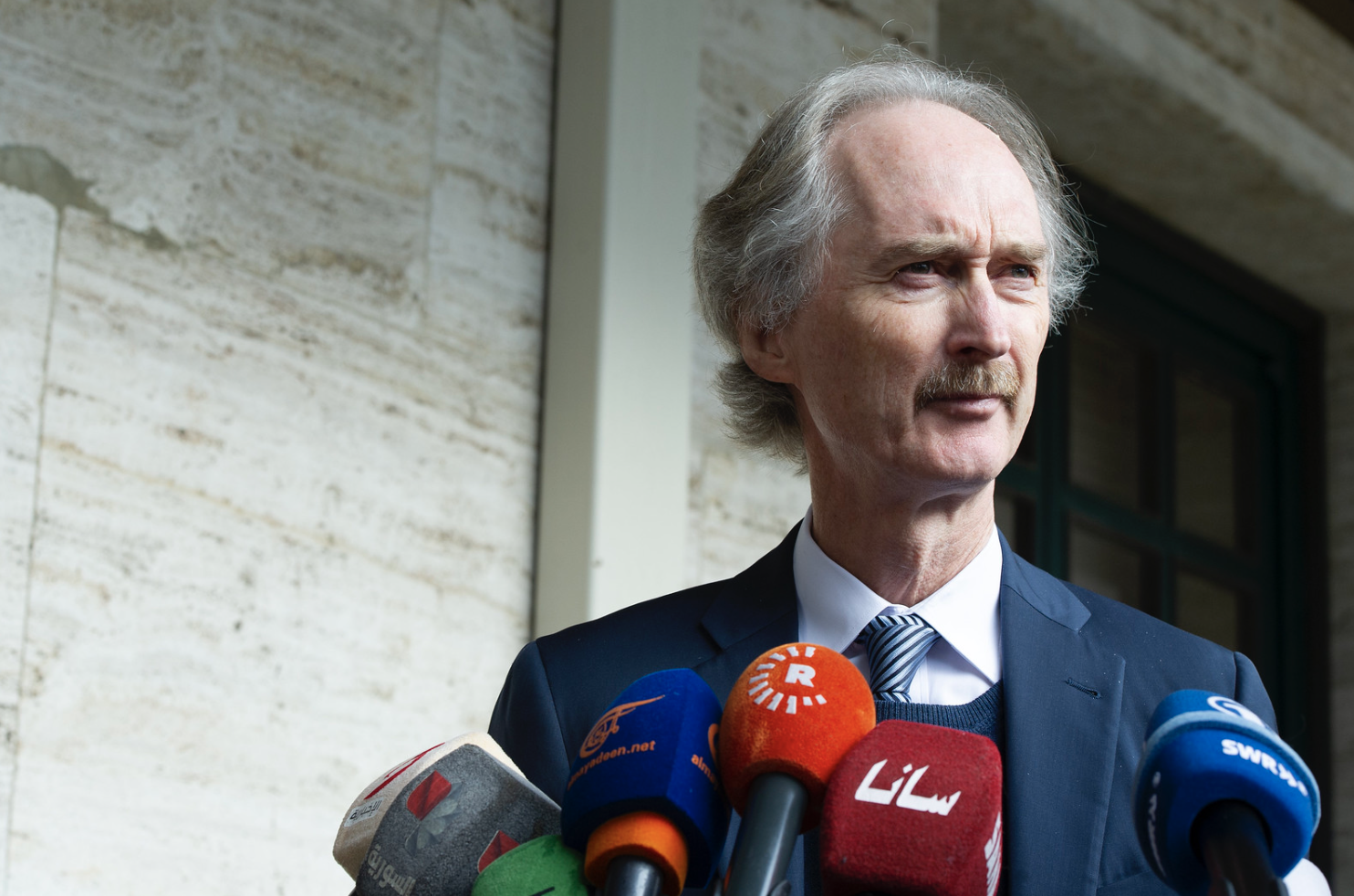 UN Emergency Relief Coordinator Mark Lowcock told Security Council members that as of Monday morning, 10 cases of COVID-19 had been confirmed in Syria.

“Judging from other places,” he said, this is the tip of the iceberg, with the virus having the potential to have a devastating impact on vulnerable communities across the country.”

“We are, for example, seeing increased rates of stunting, a consequence of child malnutrition, from which it is rarely possible fully to recover,” said Lowcock. he said that three-out-of-ten displaced children in northwest Syria under the age of five are suffering in this way. “They will live with the consequences for the rest of their lives,” he said.

This month the Syrian conflict entered its 10th year. And, Lowcock pointed out that over the past nine years, half the population has been forced to flee their homes. More than 11 million people inside Syria require humanitarian assistance, including nearly five million children.

Nearly eight million lack reliable access to food; and people throughout the country are finding it harder and harder to make ends meet.

“An economic crisis, mostly a result of the war but in part also a consequence of developments elsewhere in the region, have led to price hikes…forcing people to resort to ever more negative coping mechanisms,” Lowcock said, recognizing that measures to stem COVID-19 will also affect the economic situation.

In Geneva, the Independent International Commission of Inquiry on the Syrian Arab Republic said Saturday that with the first reported cases of COVID-19 confirmed in Syria, parties must stop fighting and allow space for urgent measures to be taken to avoid further catastrophe.

Nearly nine years of war have left the Syrian health care system acutely weakened. Only 64 percent of hospitals and 52 percent of primary healthcare centers are functioning, while 70 percent of the health workforce has left the country, according to the World Health Organisation.

Much of this situation is a result of pro-government forces systematically targeting medical facilities. Nurses, doctors and medical volunteers have been attacked, detained and disappeared by parties to the conflict, according to the three-person Commission, which is mandated by the United Nations Human Rights Council to investigate and record all violations of international law since March 2011 in the Syrian Arab Republic.

Chair of the Commission Paulo Pinheiro of Brazil said, “Syrian civilians now face a deadly threat in the form of the COVID-19 outbreak, one that will strike without distinction and that will be devastating for the most vulnerable in the absence of urgent preventative action.”

“In order to avoid a looming tragedy, the parties must heed the United Nations Secretary-General’s and the Special Envoy’s calls for a cease-fire – anything short of that will likely condemn large numbers of civilians to preventable deaths,” Pinheiro warned.

The Commission again demands that all attacks on medical providers, facilities, hospitals, and first responders must cease immediately.

“The Commission supports Special Envoy Pederson’s appeal for all parties to commit to an immediate ceasefire and also welcomes the Syrian Democratic Forces statement on avoiding military action in light of the pandemic,” Pinheiro said.

Among the communities most vulnerable to COVID-19 are the more than 6.5 million internally displaced Syrians. This includes more than a million civilians, mainly women and children, who have been living in the open or overcrowded tents and makeshift camps along the Syria-Turkey border in Idlib Governorate. They have extremely limited access to clean water or sanitation.

Elsewhere in the country, tens of thousands of others remain interned with limited access to medical care, including the 70,000 people in the al-Hol camp in eastern Syria, most of them women and children.

“Humanitarian aid, including medical supplies and support, must be allowed to flow to such persons based on need and not political considerations,” urged Commissioner Karen AbuZayd of the United States.

The situation of those detained countrywide is even more critical now. The Commission has previously documented deaths in detention due to torture, beatings, inhumane living conditions, lack of adequate medical care, and wilful neglect.

A recent Syrian government amnesty decree grants pardons and reduced sentences, but unless broadly and swiftly implemented many more detainees may not survive.

“We reiterate our call to immediately release all those detained arbitrarily or unlawfully, as well as all children, the elderly, the disabled and the infirm without delay” urged Commissioner Hanny Megally of Egypt.

The Commission also reiterates calls made by UN Secretary-General Antonio Guterres and High Commissioner for Human Rights Michele Bachelet regarding the need to ease or waive sectoral sanctions imposed on countries to ensure access to food, essential health supplies, and COVID-19 medical support.

For millions of Syrians the global pandemic threatens to unleash fresh suffering on a population that has already endured unfathomable hardship, violations, and deprivations. Urgent action is need by all actors in the Syrian Arab Republic as well as the international community to avert yet another tragedy.