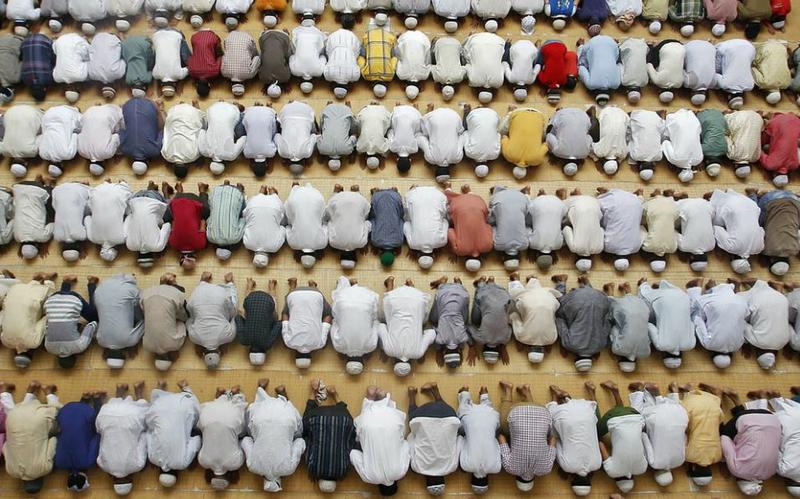 Muslims offer the first Friday prayers of the holy month of Ramadan at a mosque in the northern Indian city of Allahabad, July 4, 2014. (Photo by Jitendra Prakash / Reuters) Creative Commons license via Flickr.

PORTADOWN, Northern Ireland, June 4, 2019 (Maximpact.com News) – Muslims around the world celebrated the Eid-al-Fitr religious holiday on Tuesday, marking the end of Islam’s holy month of Ramadan, during which the faithful abstain from eating and drinking during daylight hours, pray and practice charitable giving.

Eid al-Fitr means “festival of breaking the fast.” Like the start of Ramadan, the date of Eid-al-Fitr depends on the sighting of the crescent moon. The day begins with dawn prayers and then family visits, treats for the children and feasts for all.

Traditionally, Eid is celebrated for three days as an official holiday in all Muslim-majority countries.

Muslims across the world today are celebrating the Eid festival. The news agency Al-Jazeera reports that for some Syrian refugees living in Turkey, this year’s holiday will be extra special. For the first time in almost 10 years, they can return to Syria for Eid.

Many families are travelling for the Eid festival to the Syrian city of Aleppo from Turkey where they fled to escape the Syrian civil war. They hope the day is not too far away when they can return home permanently.

But millions of Syrian refugees who sought safety abroad are still scattered across the world.

In Northern Ireland, far from home, the overall number of Syrian refugees welcomed to date is 1,258.

Many Syrians seeking refuge have settled in Portadown, a town in County Armagh on the River Bann, about 24 miles southwest of the capital Belfast. About 61 percent of Portadown residents are from a Protestant background and 31 percent are from a Catholic background.

All refugee families are receiving support from a consortium of community and voluntary groups in partnership with statutory organizations, according to the Syrian Vulnerable Persons Relocation Scheme .

Under the Vulnerable Persons Relocation Scheme refugees are expected to live in Northern Ireland for five years, after which time they can choose whether to go back to Syria or apply for UK citizenship as long as they have no criminal record.

The latest briefing document published by the Department of Communities in December 2018 states that there has been “overwhelming support” from the community throughout Northern Ireland to provide assistance to the refugee families.

Even so, Ramadan can be a difficult time for families separated by war and surrounded by people who don’t share their traditions.

Abir is a 21-year-old Kurdish Syrian who has found shelter in Northern Ireland. Abir lives in Portadown with her mother and two of her five brothers. The rest of the family is scattered around the globe, in the Canadian province of Quebec and in Turkey, with several family members still living in Syria.

With her newly acquired English language skills, Abir reflects on the month of Ramadan that she and part of her family have just experienced while residing in Portadown, and she compares her experience here to the Ramadan fasts and festivals at home in Syria.

“Ramadan is a holy month, and one of the pillars of Islam [is] that all adults must fast during this month to do worship and approaching to God, express our love to God and feed poor people,” says Abir.

In Syria, she says, “We had a lovely atmosphere during Ramadan doing lots of charity and distribute food for some people who need.”

While all adults fast, older children also fast during the days of Ramadan. Abir says, “I started to fast when I was 10 years old. It was a bit difficult for me, but I really like it. Day by day [I] got used to it during the month.”

During Ramadan, Muslims wake up well before dawn to eat the first meal of the day, which has to last until sunset. This means eating lots of high-protein foods and drinking as much water as possible right up until dawn, after which they cannot eat or drink anything.

Muslims must also try to curb negative thoughts and emotions like jealousy and anger, swearing, complaining, and gossiping, during the month of Ramadan. Some choose to give up or limit listening to music and watching television, in favor of listening to recitations of the Quran.

Muslims are not supposed to avoid work, school or any other normal duties during the day because they are fasting.

When the evening call to prayer rings out, Muslim’s break the day’s fast with a light snack, before performing the evening prayer. Many go to the mosque for the evening prayer, and follow the prayers with a larger meal a bit later in the evening, often shared with family and friends in one another’s homes throughout the month.

After the month of fasting, Eid al-Fitr in Syria was an exciting and satisfying time, says Abir.

“I was waiting eagerly while my Mum preparing food, never forgetting how the neighbors would exchange food dishes between them. How my Mum would prepare delicious and special food and drinks, and how we were happy to sit all together on one table as a big family and invite close friends and relatives,” she said. “We never ate alone.”

Now in Portadown, the joyous experience of Eid al-Fitr has an overlay of loneliness for Abir and this part of her family.

She says, “Here I am eating with my Mum and two brothers, still remembering that beautiful days and waiting very long day to break our fast. Eating alone, nobody to share food with and it’s a completely different atmosphere.”

“But,” she says, “I am still thankful for my Mum’s existing. She [is] still preparing food and praying for us while she [is] thinking about my other brothers. Though it’s difficult and [a] long time to wait, but I learnt how to be patient and how to love God more.”

Muslims believe that it was during the month of Ramadan that God revealed the first verses of the Quran, Islam’s sacred text, to Mohammed, on a night known as The Night of Power, or Laylat al-Qadr in Arabic.

The dates of Ramadan and Eid vary each year because in religious matters, Muslims follow a calendar based on the phases of the moon. Twelve lunar months add up to 354 days – 11 days shorter than the 365 days of the standard Gregorian calendar. So, the Islamic lunar calendar moves backward 11 days each year relative to the calendar used by most people.

That means the first day of the month of Ramadan, the ninth month of the Islamic lunar calendar, moves backward by about 11 days each year.

This affects how people experience Ramadan from year to year. When Ramadan falls in the summer, fasting can be difficult, especially in the Middle East and Africa, where summer temperatures soar.

Caroline Kennedy, Maximpact’s employment, education and migrant advisor in the UK, says, “What I have noticed is each and every one of the Syrians who I ask how they are coping on Ramadan are so appreciative of the fact we think about them enough to ask this question.” 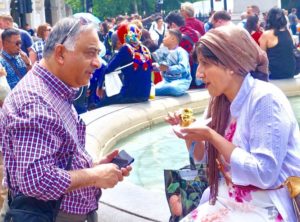 Muslims offer the first Friday prayers of the holy month of Ramadan at a mosque in the northern Indian city of Allahabad, July 4, 2014. (Photo by Jitendra Prakash / Reuters) Creative Commons license via Flickr

Eid is celebrated to give thanks for the strength that carries Muslims through the foodless, waterless days of Ramadan.

Syrian refugee Zina Downpatrick, who has settled in Portadown, writes of this year’s month of Ramadan:

“We used the fasting.

In the first few days, but now

The Syrian refugees in Portadown are now even more motivated to study and improve their lives.

Abir writes, “I would like to send sincere thanks to everyone who stood and helped us, especially external charities and the amazing work of the UN High Commissioner for Refugees, UNHCR.”

“Now,” writes Abir, “we will continue to learn English and new things about this country and will work hard on ourselves to achieve our dreams that unfortunately we couldn’t do in Syria.”