George Town, the capital of the Cayman Islands, is known as a financial hub and a port of call for cruise ships. Dec. 7, 2017 (Photo by Jorge Brazilian) Creative Commons license via Flickr

The first study to show how tax havens are linked to economic sectors that can have serious global environmental impacts has been published by a team of Swedish researchers.

“Our analysis shows that the use of tax havens is not only a socio-political and economic challenge, but also an environmental one,” says Victor Galaz, lead author of the new study, published in the journal “Nature Ecology and Evolution.”

“While the use of tax haven jurisdictions is not illegal in itself,” he explains, “financial secrecy hampers the ability to analyze how financial flows affect economic activities on the ground, and their environmental impacts.”

Researchers on the study are from the Stockholm Resilience Centre (SRC) at Stockholm University and Global Economic Dynamics and the Biosphere (GEDB), Royal Swedish Academy of Sciences.

The analysis was conducted in collaboration with the nonprofit global research platform Future Earth, which aims to “transform the world toward sustainability” with the participation of thousands of scientists.

The new research reveals that 70 percent of known vessels involved in illegal, unreported and unregulated (IUU) fishing are, or have been, flagged under a tax haven jurisdiction, in particular Belize and Panama.

Many tax havens are also flags of convenience states. These are countries with limited monitoring and enforcement capacity that do not penalize vessels sailing under their flag even if they are identified as operating in violation of international law.

The combination of tax havens and flags of convenience allow companies to sail fishing vessels with dual identities – one for legal and the other for illegal fishing activities.

“The global nature of fisheries value chains, complex ownership structures and limited governance capacities of many coastal nations, make the sector susceptible to the use of tax havens,” says co-author Henrik Österblom, deputy science director at the Stockholm Resilience Centre.

The analysis of tax havens’ role in unsustainable and illegal fishing activities was made by combining multiple datasets on fishing vessels and flag information, such as the UN Food and Agriculture Organization’s (FAO) Fishing Vessel Finder, data from Regional Fisheries Management Organizations, and Interpol.

“The absence of a more systemic view is not surprising considering the chronic lack of data resulting from the financial opaqueness created by the use of these jurisdictions,” says co-author Beatrice Crona, GEDB executive director.

This lack of transparency hides how tax havens are linked to degradation of environmental commons that are crucial for both people and planet at global scales, Crona says.

The Amazon rainforest provides for all by stabilizing the Earth’s climate system, while the ocean provides a vital source of protein and income for millions of people worldwide, particularly in low-income, food-deficit countries. 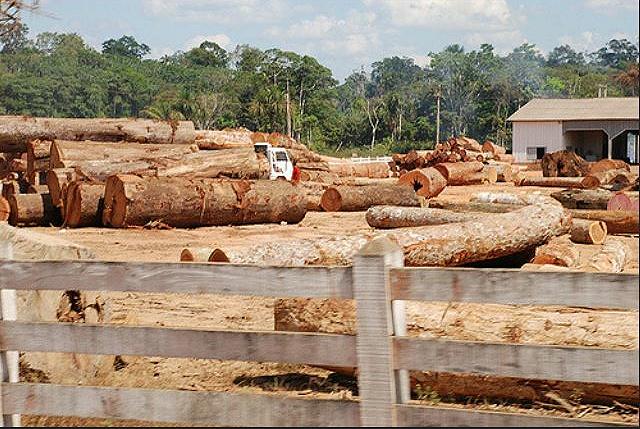 An illegal timber site in the state of Rondonia, Brazil, July 6, 2007 (Photo by Joelle Hernandez) Creative Commons license via Flickr

Hiding the Flow of Funds to Log the Amazon

The paper features the first quantification of foreign capital that flows into the beef and soy sectors operating in the Brazilian Amazon, two sectors linked to deforestation.

The underlying dataset, based on data from the Central Bank of Brazil, includes “register of foreign capital” for the period between October 2000 and August 2011.

This allowed the researchers to make the first quantification ever of flows of foreign capital from financial actors based outside of Brazil to the beef and soy sector operating in the Brazilian Amazon.

The Cayman Islands turned out to be the largest transfer jurisdiction for foreign capital to these sectors operating in the Brazilian Amazon.

The authors suggest three issues they believe should be central in future research efforts and governance of tax havens:

1) The loss of tax revenue caused by tax havens should be considered as indirect subsidies to economic activities with negative impacts on global commons;

2) Leading international fora and organizations, like UN Environment, should assess the environmental costs of these subsidies;

3) The international community should view tax evasion and aggressive tax planning as not only a socio-political problem, but also as an environmental one.

Where Are the Tax Havens?

There is no precise definition of a tax haven. The Organisation for Economic Co-operation and Development (OECD) initially listed these features of tax havens: no or low taxes, lack of effective exchange of information, lack of transparency, and no requirement of substantial activity. Other lists have been developed in legislative proposals and by researchers.

The Tax Justice Network probably has the largest list of tax havens. In addition to the countries listed in Table 1, they include in the Americas and Caribbean, New York and Uruguay; in Africa, Mellila, Sao Tome e Principe, Somalia, and South Africa; in the Middle East and Asia, Dubai, Labuan (Malaysia), Tel Aviv, and Taipei; in Europe, Alderney, Belgium, Campione d’Italia, City of London, Dublin, Ingushetia, Madeira, Sark, Trieste, Turkish Republic of Northern Cyprus, and Frankfurt; and in the Indian and Pacific oceans, the Marianas.