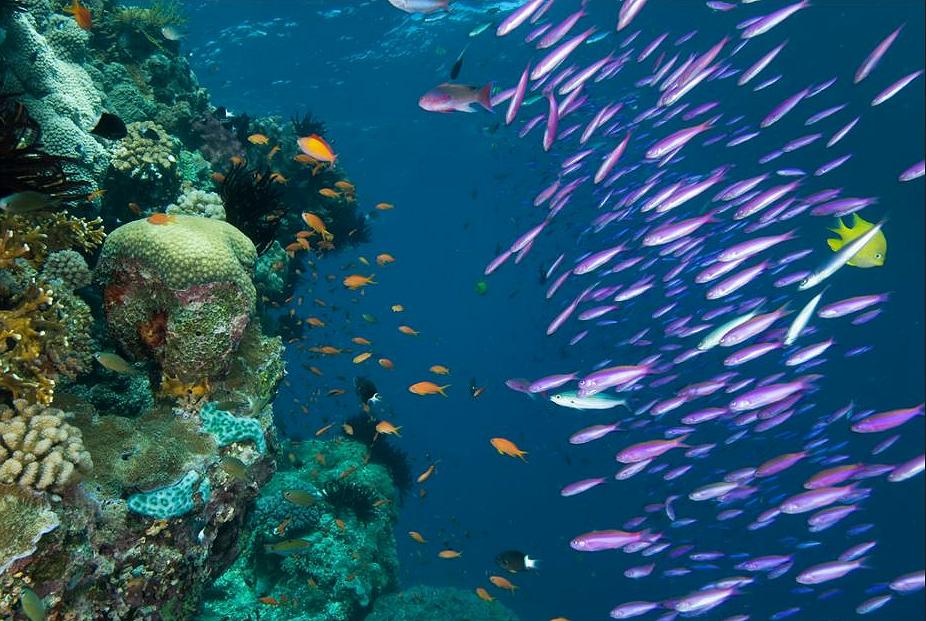 World Oceans Day has come a long way from 1992 when it was first proposed by Canada. Now the ocean has its own Sustainable Development Goal, SDG 14, which commits countries to “conserve and sustainably use the oceans, seas and marine resources for sustainable development.”

India made a bold commitment to address plastic pollution upstream by banning all single-use plastics by 2022, and to address the problem downstream, with a full coastal audit, developed in partnership with the Clean Seas campaign.

Across Nigeria, currently one of the Top 10 biggest plastic polluters, 26 major plastic waste recycling plants will be opened as part of the country’s commitment to the campaign. Head of UN Environment Erik Solheim met with Nigerian government officials June 8 to discuss the scope of their collaboration with Clean Seas.

Other countries who pledged this week to step up their protection of the ocean and their coastlines include: Argentina, Cote d’Ivoire, United Arab Emirates, Honduras, Guyana and Vanuatu.

“There is now more momentum than ever before to beat plastic pollution and protect the oceans that we all share from the tide of disposable plastic,” said Solheim. “Seeing so many countries rise to the occasion by joining the Clean Seas campaign means we are all moving towards healthier oceans that are free from pollution and full of life.”

This week, Heads of State met with the leaders of international organizations at the G7 summit in the coastal province of Quebec, Canada, to discuss strategies to address specific challenges for the oceans, including plastic pollution, overfishing, rising sea levels and the resiliency of coastal communities.

“The facts are clear. Our oceans are a mess,” UN Secretary-General António Guterres declared at a G7 outreach event. The G7 group of advanced economies, consists of Canada, France, Germany, Italy, Japan, the United Kingdom and the United States. The European Union also attends G7 meetings.

“Plastic waste is now found in the most remote areas of the planet. It kills marine life and is doing major harm to communities that depend on fishing and tourism,” Guterres warned.

Pointing out that one mass of plastic in the Pacific is now bigger than France, Guterres welcomed the G7 Ocean Plastics Charter, agreed on Saturday by five of the G7 nations, without the United States and Japan. The move is being seen by some observers as a watershed moment for cleaning up ocean trash.

“Recognizing that healthy oceans and seas directly support the livelihoods, food security and economic prosperity of billions of people,” the G7 leaders met in Charlevoix with the heads of state or government of the Argentina; Bangladesh; Haiti; Jamaica; Kenya; Marshall Islands; Norway; Rwanda, which chairs the African Union; Senegal; Seychelles; South Africa; Vietnam; and the heads of the United Nations, the IMF, the World Bank and the OECD, “to discuss concrete actions to protect the health of marine environments and ensure a sustainable use of marine resources as part of a renewed agenda to increase global biodiversity protection.” 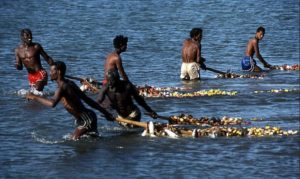 In the Banc D’arguin, Mauritania, the Imraguen group is famous because of its way of fishing, without boats, but with dolphins. When dolphins make a circle around fishes, fishermen throw their nets and bring the fish up on shore. June 18, 2006 (Photo by Christine Vaufrey) Creative Commons license via Flickr

“Recognizing that plastics play an important role in our economy and daily lives but that the current approach to producing, using, managing and disposing of plastics and poses a significant threat to the marine environment, to livelihoods and potentially to human health, we the Leaders of Canada, France, Germany, Italy, the United Kingdom and the European Union endorse the G7 Ocean Plastics Charter.”

The charter outlines a “resource-efficient lifecycle management approach to plastics in the economy,” which includes working toward making all plastics recyclable by 2030, reducing single-use plastics and promoting the use of recycled plastic.

It also pledges to build out recycling infrastructure, and innovate around more sustainable technologies.

“But we all need to do so much more,” Guterres emphasized, “not just on plastic waste but on all ocean issues.”

Greenpeace International Executive Director Jennifer Morgan said in a statement, “While the leadership to outline a common blueprint is good news, voluntary charters focused on recycling and repurposing will not solve the problem at the source.”

“Governments must move beyond voluntary agreements to legislate binding reduction targets and bans on single-use plastics, invest in new and reuse delivery models for products, and hold corporations accountable for the problem they have created,” Morgan urged.

More governments than ever are implementing some kind of intervention against single-use plastics, from bans, restrictions and levies on disposable plastic items to the implementation of better recycling facilities and the development of viable alternatives to the most common contributors to marine litter.

UN Environment launched #CleanSeas in February 2017, with the aim of engaging governments, the general public, civil society and the private sector in the fight against marine plastic litter. By connecting individuals, civil society groups, industry and governments, UN Environment aims to transform habits, practices, standards and policies around the globe to reduce marine litter and the harm it causes.

This year, international concern for the plight of the global ocean is at an all-time high. In April, the 53 countries of the British Commonwealth adopted the Commonwealth Blue Charter, creating a guide to cooperative action on ocean issues.

Commonwealth countries recognize that time is of the essence and they are cooperating to achieve their goals.

In the words of the Commonwealth Blue Charter, the time has come to “move from words to actions.”

“Innovation is key to this whole issue. We need practical new ideas for on-the-ground action – that’s what the Action Groups aim to deliver,” comments Nick Hardman-Mountford, head of the Oceans and Natural Resources Division at the Commonwealth.

And groups are acting now. Australia, Belize, and Mauritius have stepped forward to co-lead a Blue Charter Action Group on coral reef regeneration. Just a few years ago, scientists were lonely voices sounding the alarm about coral. Now it is common knowledge that the world’s reefs are in peril, and protecting the corals must extend to actively restoring them.

“To see Commonwealth leaders stepping forward for the ocean was a real ‘pinch-me moment,'” says Jeff Ardron, who coordinates work under the Commonwealth Blue Charter.

The OECS will soon be populating the Think Blue portal with original education content on the Blue Economy, as well as outfitting it with the artificial intelligence algorithm for enhanced use: video here.

The Organization of Economic Co-operation and Development (OECD) suggests that these skills will be linked to ocean-based industries – coastal tourism, shipping and transport, fisheries and aquaculture – as they are projected to provide the greatest number of new jobs and entrepreneurial opportunities.

Already, we are experiencing high demand in these ‘blue’ sectors, particularly in coastal and island countries across the globe.

Think Blue points out that progress towards meeting the education targets of the Sustainable Development Goals and for meeting the rising demand for skilled employment in ocean-based industries is hindered by a shortage of at least 68.8 million teachers and educators as projected by UNESCO.

Think Blue is offered as an enhanced portal solution for innovation in ocean education, prompting and supporting life-long learning.

“The portal aims to apply disruptive technologies such as artificial intelligence and machine learning to personalize individual searches and yield better results for all audiences,” Barbosa says. “The portal represents a shift in mindset towards the use of edu-tech products and disruptive technologies to better prepare current and future generations to steer the planet toward a sustainable future.”