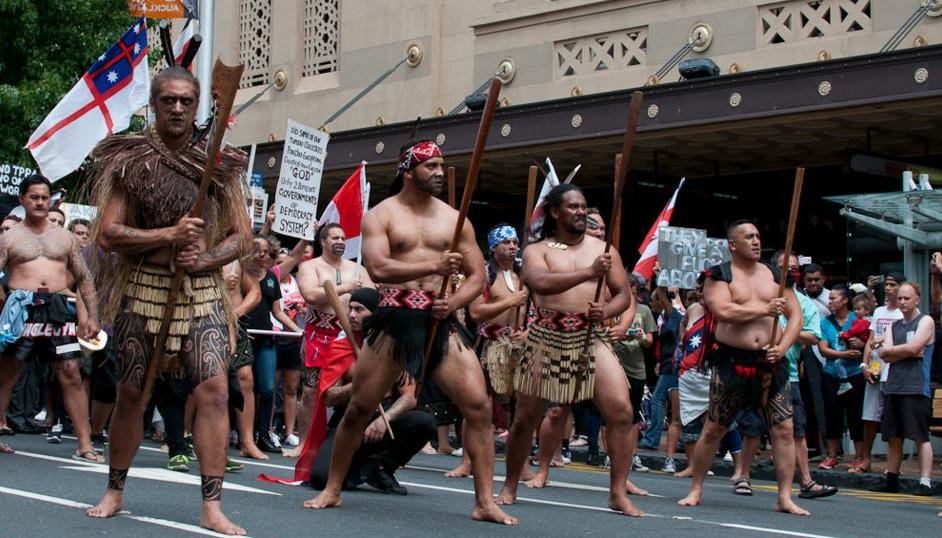 AUCKLAND, New Zealand, February 9, 2016 (Maximpact.com News) – “We expect this historic agreement to promote economic growth, support higher-paying jobs; enhance innovation, productivity and competitiveness; raise living standards; reduce poverty in our countries; and to promote transparency, good governance, and strong labor and environmental protections,” declared the ministers of the 12 Trans-Pacific Partnership (TPP) countries on February 4 as they signed the document that for the first time opens trade across the region.

The agreement includes former enemies at war as well as overwhelmingly Catholic countries such as Peru and Chile, the Buddhist-Shinto country of Japan, and majority Muslim nations such as Brunei and Malaysia.

But many civil society groups oppose the agreement for a host of reasons. They warn it will undermine environmental protections, human rights, labor rights, indigenous rights and internet freedom, despite official assurances to the contrary.

After more than five years of negotiations, ministers finalized the text at a session in Atlanta, Georgia on October 5, 2015 and agreed to sign it within 90 days. That signing event took place in Auckland on February 4, 2016.

“TPP will provide much better access for goods and services to more than 800 million people across the TPP countries, which make up 36 percent of global GDP,” said Key. “TPP is our biggest-ever free trade deal and is estimated to boost our economy by at least $2.7 billion a year by 2030.”

“It is New Zealand’s first Free Trade Agreement relationship with five of the TPP countries, including the largest and third-largest economies in the world – the United States and Japan. Successive New Zealand governments have been working to achieve this for 25 years, the prime minister said.

Prime Minister Key views the TPP as not only good for New Zealand, but also for the entire Asia Pacific region.

“Other countries have already signalled an interest in joining TPP and this could lead to even greater regional economic integration. A more prosperous and therefore secure region, is in all of our interests,” Key said.

The next step is for member countries to ratify the TPP so it can take effect.

The agreement can take effect only with the approval of at least six countries, which account for at least 85 percent of the combined gross domestic product of all member nations.

This means that it must be adopted by the legislatures of the two largest TPP economies, the United States and Japan.

Just 71 years ago, the United States dropped nuclear bombs on Japanese cities, as the two nations were bitter enemies locked in a struggle for control of the Pacific during World War II.

But now Japanese Prime Minister Shinzo Abe says the Trans-Pacific Partnership will allow Japan and the United States together to write the rules for the global economy.

Speaking at an economic forum in Tokyo in October, the day after the long-secret text of the TPP was made public, Abe said, “Rules should not be something that are imposed on you – you make them. The TPP is the structure where Japan and the U.S. can lead in economic rule-making.” 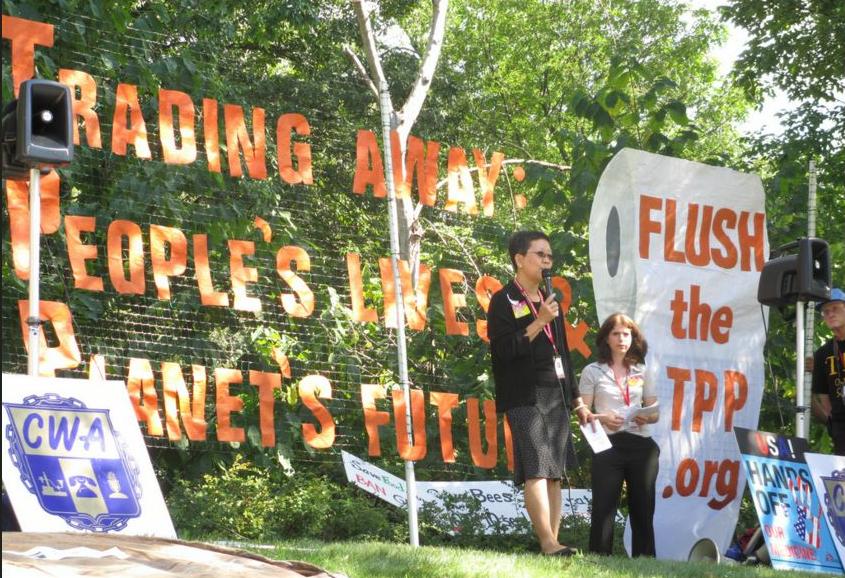 The TPP protest movement has been building for years. Here, American workers demonstrate against the Trans-Pacific Partnership in Leesburg, Virginia, September 9, 2012. CWA stands for Communications Workers of America.

U.S. President Barack Obama said after the document was signed on February 4, “TPP allows America – and not countries like China – to write the rules of the road in the 21st century, which is especially important in a region as dynamic as the Asia-Pacific.”

“It eliminates more than 18,000 taxes that various countries put on Made in America products,” said Obama. “It promotes a free and open Internet and prevents unfair laws that restrict the free flow of data and information.”

“It includes the strongest labor standards and environmental commitments in history – and, unlike in past agreements, these standards are fully enforceable.”

Fifty years ago, the United States and Vietnam were engaged in a fierce war, and U.S. demonstrations against involvement in the Vietnam war sharply divided the country.

Today, both countries are signatories to the Trans-Pacific Partnership.

The World Bank’s latest “Taking Stock” report features a special section on the Trans-Pacific Partnership Agreement, in which it projects that the TPP is expected to generate considerable benefits for Vietnam, despite “implementation challenges.”

“The recently concluded TPP will not only improve market access, but will also serve as a critical anchor for the next phase of structural reforms in Vietnam.” says Sandeep Mahajan, lead economist for the World Bank Vietnam.

As the TPP economy with the lowest per capita GDP, Vietnam has unique comparative advantages, particularly in labor-intensive manufacturing. Simulations suggest that the TPP could add as much as eight percent to Vietnam’s GDP, 17 percent to its real exports, and 12 percent to its capital stock over the next 20 years.

An agreement that opens trade, forges bonds between old enemies, and brings together 800 million people of many different faiths and languages – what could go wrong?

Plenty, according to protesters in some of the TPP countries.

Environmentalists object to language such as this. “3. The Parties further recognize that it is inappropriate to establish or use their environmental laws or other measures in a manner which would constitute a disguised restriction on trade or investment between the Parties.”

A movement of labor, environmental, family farm, consumer, faith and other organizations has escalated its campaign to defeat the Trans-Pacific Partnership with a joint 1,525-group letter urging the U.S. Congress to oppose the trade agreement.

“As you would expect from a deal negotiated behind closed doors with hundreds of corporate advisors, while the public and the press were shut out, the TPP would reward a handful of well-connected elites at the expense of our economy, environment and public health,” said Arthur Stamoulis, executive director of Citizens Trade Campaign, which organized the letter.

“Beyond just failing to mention the term “climate change” in its thousands of pages, the TPP would also provide corporations with new tools for attacking environmental and consumer protections, while simultaneously increasing the export of climate-disrupting fossil fuels,” Stamoulis wrote.

The U.S.-based global climate campaign 350.org called the TPP “a toxic deal that would give dangerous new powers to the fossil fuel industry and pose a serious harm to the climate.”

“The TPP is a fossil fuel industry handout,” said Payal Parekh, 350.org Global Managing Director. “This partnership in pollution gives corporations the right to challenge any local government or community that tries to keep fossil fuels in the ground.”

“The deal signed in New Zealand today makes a mockery of the climate agreement decided in Paris last December. If countries are serious about addressing the climate crisis, they need to stand up to coal, oil and gas companies, not reward them with new rights and privileges,” Parekh warned.

350.org is one of many organizations around the world that will be mobilizing members to fight back against the TPP and block its final approval and implementation.

Corporate Accountability International, based in Boston, states, “We oppose the TPP because it prioritizes corporate interests over public health, the environment, human rights, and democracy.”

In Kuala Lumpur in January, some 5,000 Malaysians protested the TPP on Saturday, days before parliament was due to open a debate on the pact.

Many of the demonstrators were from the opposition Parti Islam Se-Malaysia (PAS). They voiced fears that their country could lose control of its economy if it enters the partnership with the United States.

“The TPP won’t come into force until it gets ratified,” says OpenMedia. “That means the final and most crucial phase of the battle begins today.”