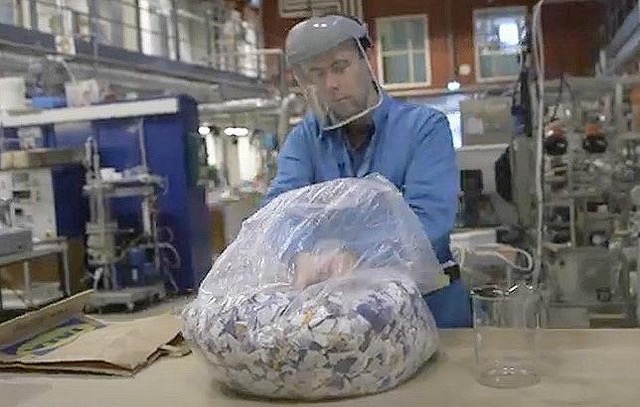 In his lab Edvin Ruuth, researcher in chemical engineering at Lund University, prepares to transform scraps of cotton into a sugar solution before turning that solution into a new textile, February 2021 (Screengrab from video courtesy Lund University) Posted for media use

LUND, Sweden, March 3, 2021 (Maximpact.com News) – Every year, an estimated 25 million tonnes of cotton textiles are discarded around the world, about a quarter of the 100 million tonnes of all the textiles thrown out each year. In Sweden, most of the unwanted material goes straight into an incinerator and becomes district heating. In other places, cotton clothes usually end up in landfills.

“Considering that cotton is a renewable resource, this is not particularly energy-efficient,” says Edvin Ruuth, researcher in chemical engineering at Lund University.
Now, Ruuth and his team at Lund University have developed a method that converts cotton into sugar, and that in turn can be turned into spandex, nylon or ethanol.
The fashion industry has a considerable environmental impact, especially due to the increased generation of waste textiles as a result of fast fashion business models. Many of us recycle our old textiles, but few of us know that they are very difficult to re-use, and often end up in landfills anyway.
“Some fabrics still have such strong fibers that they can be re-used. This is done today and could be done even more in future. But a lot of the fabric that is discarded has fibers that are too short for re-use, and sooner or later all cotton fibers become too short for the process known as fiber regeneration,” Ruuth said.
At the Department of Chemical Engineering in Lund where Ruuth works, there is much accumulated knowledge about using micro-organisms and enzymes, among other things, to transform the “tougher” carbohydrates in biomass into simpler molecules. This means that everything from biological waste and black liquor to straw and wood chips can become bioethanol, biogas and chemicals.
Now the researchers also have succeeded in breaking down the plant fiber in cotton – the cellulose – into smaller components by soaking the fabrics in sulphuric acid. The result is a clear, dark, amber-colored sugar solution.
“The secret is to find the right combination of temperature and sulphuric acid concentration,” explains Ruuth, who fine-tuned the recipe together with doctoral student Miguel Sanchis-Sebastiá and Professor Ola Wallberg.
To WATCH on YouTube as the new method transforms old cotton into glucose, click <a href=”https://www.youtube.com/watch?v=B1V–prLs08“>here</a>.
Glucose is a very flexible molecule and has many potential uses, explains Ruuth. “Our plan is to produce chemicals which in turn can become various types of textiles, including spandex and nylon. An alternative use could be to produce ethanol.”
From an ordinary bedsheet, they can extract five liters of sugar solution, each liter containing the equivalent of 33 sugar cubes. However, the liquid will never be turned into a soft drink as it also contains corrosive sulphuric acid.
“What makes cotton unique is that its cellulose has a high crystallinity. This makes it difficult to break down the chemicals and reuse their components. In addition, there are a lot of surface treatment substances, dyes and other pollutants which must be removed. And structurally, a terrycloth towel and an old pair of jeans are very different,” says Ruuth. “Thus it is a very delicate process to find the right concentration of acid, the right number of treatment stages and temperature.” 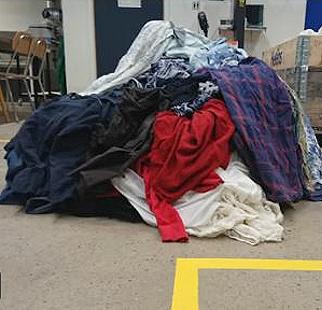 A heap of discarded cotton fabrics on the floor of the Lund University lab where Edvin Ruuth process them into a sugar solution that is the basis of a new nylon or spandex textile. February 2021 (Screengrab from video courtesy Lund University) Posted for media use

The concept of hydrolizing pure cotton is nothing new, explains Ruuth; it was discovered in the 1800s. The difficulty has been to make the process effective, economically viable and attractive.

“Many people who tried ended up not utilizing much of the cotton, while others did better but at an unsustainable cost and environmental impact,” says Ruuth.
When he started making glucose out of fabrics a year ago, the return was a paltry three to four percent. Now Ruuth and his colleagues have reached as much as 90 percent.
Once the recipe formulation is complete, it will be both relatively simple and cheap to use, he says.
But there is another hurdle to jump. For the process to become a reality, the logistics must work. There has been no established way of managing and sorting various textiles that are not sent to ordinary clothing donation points.
Necessity has led to invention. A recycling center unlike any other in the world is currently under construction in the Swedish city of Malmö, where clothing is sorted automatically using a sensor. Some clothing will be donated, rags can be used in industry, and textiles with sufficiently coarse fibers can become new fabrics.
The rest will go to district heating. And the Lund University team is hopeful that a smaller proportion of the unwanted fabric will be burned for district heating once their technology is in place. 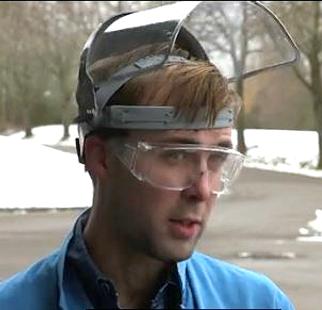 In his lab Edvin Ruuth, researcher in chemical engineering at Lund University, prepares to transform scraps of cotton into a sugar solution before turning that solution into a new textile, February 2021 (Screengrab from video courtesy Lund University) Posted for media use

To read the study, “Novel sustainable alternatives for the fashion industry: A method of chemically recycling waste textiles via acid hydrolysis,” as published in the February 15 issue of the journal “Waste Management,” click <a href=”http://dx.doi.org/10.1016/j.wasman.2020.12.024“>here</a>.