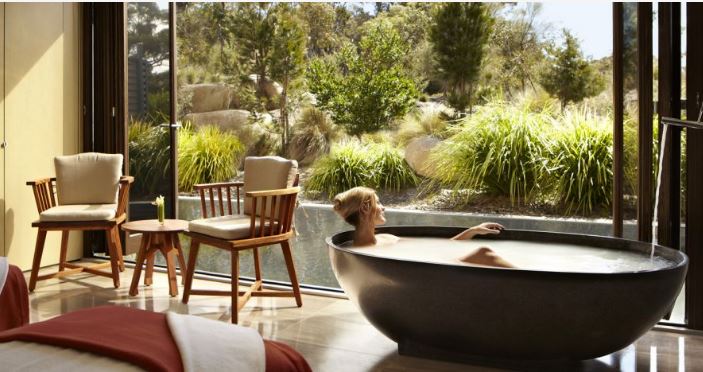 Australia’s luxury resort Saffire Freycinet is located mid-way along Tasmania’s East Coast. To eliminate the last bit of temptation, the resort requires guests to surrender their digital devices upon arrival if they are participating in the resort’s “e-tox” package. (Photo courtesy Digital Detox Holidays) Posted for media use

TOWNSVILLE, Queensland, Australia, July 24, 2018 (Maximpact.com News) – Hard to believe for Internet addicts who check their phones 80 times a day but the phenomenon of digital detox is on the rise and could be an important part of the tourism industry in the future, researchers at Australia’s James Cook University  have concluded.

Philip Pearce, who became the first professor of tourism in Australia in 1990, is now at JCU studying changes in the portrayal of digital-free tourism – where internet and mobile signals are either absent or digital technology use is controlled.

Pearce said services offered will likely expand to include temporary disconnection, alternative activities, personalized digital-free experiences and special programs for certain groups such as a family with children or a group of work colleagues.

Take Petit St Vincent, for instance. This luxurious private island in the Grenadine islands of the West Indies accessible only by boat, lets guests unplug. Amidst generous comforts and ultimate privacy, there is a deliberate absence of connectivity. There are no TV’s, phones or internet in the beach front villas and cottages, encouraging guests to unwind and relax.

Or travelers in search of digital detox could choose to visit northern Thailand’s Lisu Lodge, a basic lodge in Chiang Mai Province without televisions, phones or Internet connection. The main organized activity is a trip to the tribal village of the Lisu to meet the shaman of the village, drink tea with the locals and experience how the Lisu lived centuries ago. Guests can go mountain biking, water rafting or have an elephant adventure – all without their digital devices.

For this study, the JCU researchers analyzed media references to digital-detox over the past decade.

“The first references we found on the topic of digital-detox holidays were a single article from 2009 and another the next year,” said Pearce. “Serious media coverage of digital-free holidays started in 2011.”

Pearce said the experience was first offered as an up-market product targeting the high-end travel market.

“By 2016 and in 2017 though, there was a change of emphasis, with digital-free holidays going from a niche product to one appealing to a broader consumer base,” he said.

“There is recognition in the industry of the ‘new escapism,’ where people not only want to stay away from the physical home environment, but also to disconnect from the digital world of routine work and social life,” Pearce said.

“It’s not yet clear if this kind of tourism will be profitable for many commercial operators. We only know there has been a rise in media coverage which may indicate a growing industry phenomenon.”

There are all kinds of tech-free holidays. There’s the luxury get-away version of digital detox, and there’s the back to basics digital-free retreat.

Based in California’s Bay Area, Digital Detox® Retreats offers a back to basics experience. At the company’s Camp Grounded Summer Camp for Adults, Digital Detox retreatants from over 30 states and 8+ countries trade in their computers, cell phones, emails, Instagrams, clocks, schedules, work-jargon and networking for an off-the-grid weekend of fun in the California redwoods.

Founders Levi Felix and Brooke Dean say on their website, “By providing a truly integrated experience that nourishes both mind and body, while deepening one’s sense of self without the digital distractions of everyday life, we are able to focus on the tenants of connection, rather than disconnection.”

“It’s not just about unplugging. It’s about rediscovering what happens when we truly plug-in to life. As we disconnect from our devices, we reconnect with ourself, our community, nature and the world at large.”

Then, there’s the medical approach, such as the expertise offered at the reSTART Center for Digital Technology Sustainability, a rehab facility for online addicts located near Redmond, Washington, the home of Microsoft.

For close to a decade, reSTART has been coaching problematic users, often gamers, whose lives have become unmanageable. Relationships with family members have deteriorated, motivation to engage in offline activities has diminished, and connection with educational pursuits has often turned to apathy at best, and downright school refusal for a few.

In January, the World Health Organization included Gaming Disorder in the draft 11th Revision of the International Classification of Diseases (ICD-11).

WHO says this decision is based on decades of scientific research conducted around the world showing that certain types of digital media use may lead to functional impairments in some users.

The decision was made despite the objections of the video game industry and researchers who believe the scientific evidence for the classification is weak at best.

WHO describes gaming disorder as “a pattern of gaming behavior (“digital-gaming” or “video-gaming”) characterized by impaired control over gaming, increasing priority given to gaming over other activities to the extent that gaming takes precedence over other interests and daily activities, and continuation or escalation of gaming despite the occurrence of negative consequences.”

“At reSTART,” say co-founders Cosette Rae and Hilarie Cash, “we understand that problematic Internet and gaming use often co-occurs with other mental health conditions. Our program is designed to address a wide variety of underlying issues which may contribute to excessive Internet use (e.g., family problems, divorce, childhood trauma, depression, anxiety, ADHD, etc.) by connecting individuals with integrative community service providers knowledgeable in these areas during a stay at the center.”

It’s not a vacation, but a life reconstruction opportunity. Each participant receives one-to-one individual therapy with professionals in the field of addiction recovery. Participants begin each day fitness class and a personal discovery session. Group work fosters an understanding of what participants want out of life by examining choices and defining personal values.

And in Australia, where Internet usage stands at 88 percent, 69 percent of the population are active social media users, and many Aussies spend an average of five hours and 34 minutes online daily, Professor Pearce said there is an opportunity in remote parts of the country to explore the feasibility of partial disconnection.

There, the combination of isolation and disconnection could appeal to a special market, particularly if blended with interests such as astronomy tourism and outback photography.

Sounds good to me, but not to quite a few Americans.

While Americans want to relax and get away from their daily routines, they don’t want a break from their phones, according to new research sponsored by Nashville-based mobile phone insurance company Asurion.

“The results reveal that while people enjoy taking a vacation from everyday life, they don’t necessarily want to take a full break from their phone, which serves as their main connection to friends and family, and is a practical tool to help get around when travelling,” said Asurion spokesperson Bettie Colombo.

Four hours is the average time Americans can stand to be away from their phones while indulging in rest and recreation.

The Forest app – available for both the iPhone and Android – sets a timeframe when a user wants to leave the phone alone. During that time the Forest app plants a digital seedling that slowly grows into a tree on the phone screen. The tree withers if the user checks the phone before the time is up.