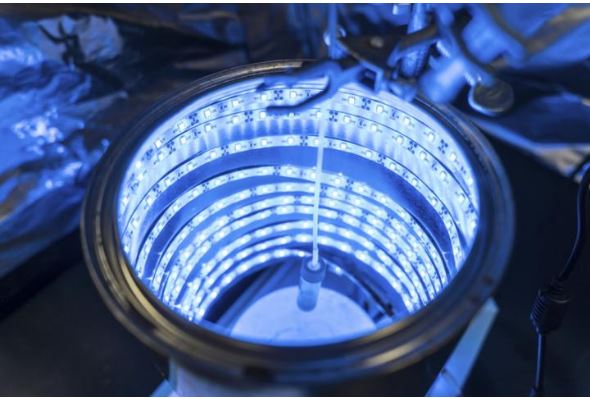 ORLANDO, Florida, January 9, 2018 (Maximpact.com News) – The work of a chemistry professor in Florida who discovered a way to turn greenhouse gas into clean air and produce energy at the same time has attracted the most attention of all the thousands of science news items posted last year on EurekAlert! the online, global information service operated by the American Association for the Advancement of Science.

The process, which triggers photosynthesis in a synthetic material, has great potential for creating a technology that could reduce greenhouse gases linked to climate change, while also creating a clean way to produce energy.

Attracting 898,848 views since April, the University of Central Florida release and video about the research of Assistant Professor Fernando Uribe-Romo is also the most-visited in the science-news service’s 21-year history and surpassed its 2016 predecessor by 116 percent.

“This work is a breakthrough,” said Uribe-Romo. “Tailoring materials that will absorb a specific color of light is very difficult from the scientific point of view, but from the societal point of view we are contributing to the development of a technology that can help reduce greenhouse gases.”

The findings of his research are published in the “Journal of Materials Chemistry A.“

Uribe-Romo and his team of students created a way to trigger a chemical reaction in a synthetic material called metal-organic frameworks that breaks down the most abundant greenhouse gas carbon dioxide into harmless organic materials.

The artificial photosynthesis process is similar to the way plants convert carbon dioxide (CO2) and sunlight into food. But instead of producing food, Uribe-Romo’s method produces solar fuel.

Scientists around the world have been seeking a way to do this for years, but the challenge has been finding a way for visible light to trigger the chemical transformation.

Ultraviolet rays have enough energy to allow the reaction in common materials such as titanium dioxide, but UVs make up only about four percent of the light Earth receives from the Sun.

The visible range – the violet to red wavelengths – represent the majority of the Sun’s rays, but there are few materials that pick up these light colors to create the chemical reaction that transforms CO2 into fuel.

Researchers have tried it with a variety of materials, but the ones that can absorb visible light tend to be rare and expensive materials such as platinum, rhenium and iridium that make the process cost-prohibitive.

Uribe-Romo used titanium, a common nontoxic metal, and added organic molecules that act as light-harvesting antennae to see if that configuration would work.

The light harvesting antenna molecules, called N-alkyl-2-aminoterephthalates, can be designed to absorb specific colors of light when incorporated in the metal-organic frameworks.

In his lab, Uribe-Romo synchronized it for the color blue.

His team assembled a blue LED photoreactor to test out the hypothesis. Measured amounts of CO2 were slowly fed into the photoreactor – a glowing blue cylinder – to see if the reaction would occur. The glowing blue light comes from strips of LED lights inside the chamber of the cylinder and mimics the Sun’s blue wavelength.

It worked. The chemical reaction transformed the CO2 into two reduced forms of carbon, formate and formamides – two kinds of solar fuel. In the process the air was cleaned of the greenhouse gas.

“The goal is to continue to fine tune the approach so we can create greater amounts of reduced carbon so it is more efficient,” Uribe-Romo said.

To see Uribe-Romo explain the process in his own words, click here.

He wants to see if the other wavelengths of visible light may also trigger the reaction with adjustments to the synthetic material. If they do, the process could become an important way to help reduce greenhouse gases in the atmosphere.

“The idea would be to set up stations that capture large amounts of CO2, like next to a power plant,” explained Uribe-Romo. “The gas would be sucked into the station, go through the process and recycle the greenhouse gases while producing energy that would be put back into the power plant.”

Homeowners of the future may be able to buy rooftop shingles made of the material, which would clean the air in their neighborhoods while producing energy that could be used to power their homes.

“That would take new technology and infrastructure to happen,” Uribe-Romo said. “But it may be possible.”

Eurekalert! officials paid tribute to the information officers at universities who write the press releases explaining some highly technical research.

Brian Lin, director of editorial content strategy at EurekAlert!, said, “Several of this year’s trending releases – including our all-time record-breaker – were based on very technical scientific papers which, without the efforts of public information officers, may have attracted little public attention.”

The 10 most popular news releases on EurekAlert! in 2017 were:

Featured image : Professor Fernando Uribe-Romo and his team have triggered a chemical reaction in a synthetic material that breaks down carbon dioxide into harmless organic materials and produces solar fuel. (Photo by Bernard Wilchusky / UCF) Posted for media use