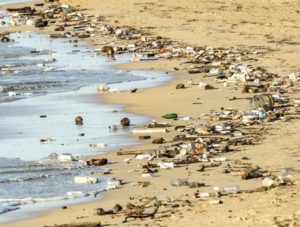 Trash, including many plastic bottles, washed up on Samana beach, Domincan Republic in the Caribbean Sea. April 3, 2018 (Photo by Rey Perezoso)

NEW YORK, New York, October 22, 2019 (Maximpact.com News) – Around the world, almost one million plastic bottles are purchased every minute. As the environmental impact of that plastic tide swells into a political issue, packaged goods sellers and retailers, pressured to stem the flow of single-use bottles and containers, are coming up with new ideas and technologies to solve the problem.

Plastic production has surged in the past 50 years, responding to the widespread demand for inexpensive, single-use disposable products that are devastating the environment. And, while images of plastic debris-covered beaches and marine animals dead from eating plastic have triggered public outrage, it won’t stop anytime soon. The oil industry is pouring billions into new facilities to produce more plastics, particularly in Asia, the biggest regional producer of plastic and plastic waste.

Polyethylene terephthalate (PET) bottles are commonly used for soft drinks and mineral water, but can also be used for other household or personal care products. Data from Euromonitor International, shows that more than 480 billion of these bottles were sold last year alone. That’s almost one million every minute.

Rosemarie Downey, global head of packaging research at market research company Euromonitor International, told Reuters that adopting circular design principles in packaging, which considers the entire lifecycle of a product, including use and reuse, is one way for brands to address surplus waste at the outset and can assist recovery, recycling, and reuse in order to reduce the damaging impact of plastic waste in the environment.

“Ultimately, mindful consumption of plastic is a global duty of everyone,” Downey said. “Consumers have their part to play to help realize zero-litter, as do corporate players in their use and handling, and governments in providing the necessary, optimized waste management infrastructure.”

The European Union has voted to outlaw 10 single-use plastic items, including straws, forks and knives, by 2021. It has also set targets for all plastic packaging, the top source of plastic waste, to be recyclable by 2030.

All Waste Plastic Could Be Recreated as New Plastic 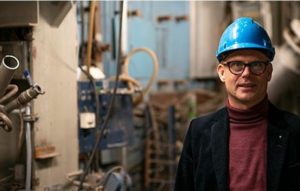 Faced with this difficult problem, scientists and corporate product designers alike have been searching for ways to keep single-use plastic items from proliferating in the environment.

The fact that plastics do not break down but accumulate in our ecosystems is a major environmental problem. But at Chalmers University of Technology in Gothenburg, Sweden, a research group led by Professor Henrik Thunman, who heads the Division of Energy Technology at the Department of Space, Earth and Environment, sees the resilience of plastic as an asset.

The nondegradable character of plastic that makes it such an environmental disaster also makes it a candidate for circular usage, creating a true value for used plastic, and thus an economic incentive to collect it, Thunman explains.

“We should not forget that plastic is a fantastic material – it gives us products that we could otherwise only dream of,” Thunman said. “The problem is that it is manufactured at such low cost, that it has been cheaper to produce new plastics from oil and fossil gas than from reusing plastic waste.”

Now, through experimenting with chemical recovery via steam cracking of plastic, Thunman’s research group at Chalmers has developed an efficient process for breaking any type of plastic waste down to a molecular level. The resulting gases can then be transformed into new plastics of the same quality as the original plastic.

“Through finding the right temperature, which is around 850 degrees Celsius, and the right heating rate and residence time, we have been able to demonstrate the proposed method at a scale where we turn 200 kg of plastic waste an hour into a useful gas mixture. That can then be recycled at the molecular level to become new plastic materials of virgin quality,” says Thunman.

The new process could transform today’s plastic factories into recycling refineries, right within the framework of their existing infrastructure. 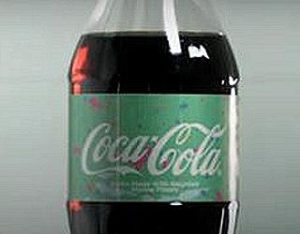 On October 15, the Coca-Cola company unveiled the first sample bottle made using recovered and recycled marine plastics, demonstrating that plastic ocean debris can be used in recycled packaging for food and drinks.

The sample bottle is the result of a partnership between Ioniqa Technologies, Indorama Ventures, Mares Circulares (Circular Seas) and The Coca-Cola Company.

Although enhanced recycling is still in its infancy, the partners produced the sample marine plastic bottles as a proof of concept for what the technology may achieve in time.

About 300 sample bottles have been produced using 25 percent recycled marine plastic retrieved from the Mediterranean Sea and beaches. The marine plastic in the bottles was collected and recovered by volunteers who participated in 84 beach cleanups in Spain and Portugal, as well as fishermen in 12 ports across the Mediterranean Sea, as part of the Mares Circulares or Circular Seas project, partially funded by The Coca-Cola Foundation.

The marine plastic bottle was developed to show the transformational potential of revolutionary enhanced recycling technologies, which can recycle previously used plastics of any quality back to the high-quality virgin plastic needed for food or drinks packaging.

A small step, but the technology behind it has big potential.

In the immediate term, enhanced recycling will be introduced at commercial scale using waste streams from existing recyclers, including previously unrecyclable plastics and lower-quality recyclables. From 2020, Coca-Cola plans to roll out this enhanced recycled content in some of its bottles.

Bruno van Gompel, technical and supply chain director, Coca-Cola Western Europe, says the potential for the technology is huge. “Enhanced recycling technologies are enormously exciting, not just for us but for industry and society at large. They accelerate the prospect of a closed-loop economy for plastic, which is why we are investing behind them.”

“As these begin to scale,” said van Gompel, “we will see all kinds of used plastics returned, as good as new, not just once but again and again, diverting waste streams from incineration and landfill.”

Tonnis Hooghoudt, CEO of Ioniqa Technologies, the Dutch company that developed the proprietary enhanced recycling technology, says, “The impact of enhanced recycling will be felt on a global scale. By working with Coca-Cola and Indorama to produce this bottle, we aim to show what this technology can deliver. Our new plant is now operational and we are bringing this technology to scale. In doing so, we aim to eliminate the concept of single use plastic and plastic waste altogether.”

Some countries are trying to control the plastic tide through legislation. The Canadian government led by Liberal Prime Minister Justin Trudeau in June announced a ban on single-use plastics by 2021, joining over two dozen countries that have made similar moves.

Although specific details have yet to be released, Canada’s announcement puts pressure on big companies like Coca-Cola and PepsiCo that sell billions of single-use plastic bottles.

While PepsiCo has not yet disclosed its plastic use, Coca-Cola has shared that it used three million metric tons of plastic in 2017 – about 200,000 plastic bottles every minute.

Writing for “Corporate Knights,” a Canadian publication, Tim Nash said on June 17, “The massive amount of plastic waste in our water systems is becoming impossible to ignore. We know about the Great Pacific Garbage Patch, we’ve seen the large amounts of plastic being found in whales that wash up on shore, and we’ve heard about the latest study from WWF showing that the average person ingests a credit card’s worth of microplastics every single week.”

“Although specific details have yet to be released, Canada’s announcement puts pressure on big companies like Coca-Cola and PepsiCo that sell billions of single-use plastic bottles,” states Nash.

“I will give Coca-Cola credit for setting goals to design packaging that’s 100 percent recyclable globally by 2025, use at least 50 percent recycled materials by 2030, as well as collect and recycle the equivalent of 100 percent of every bottle and can sold by 2030,” wrote Nash. “They have their work cut out for them.”

Computer-maker HP Inc., a member of NextWave Plastics, on September 27 announced the launch of the HP Elite Dragonfly, the world’s first notebook 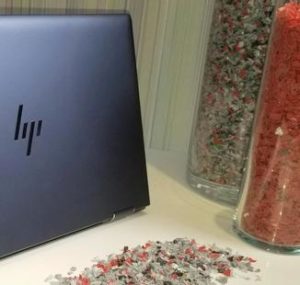 The HP Elite Dragonfly is the world’s lightest, most compact business computer, weighing less than one kilogram (2.2 pounds). Its speaker enclosure component is made with 50 percent post-consumer recycled plastic, including five percent ocean-bound plastics.

The company also announced it has upcycled more than one million pounds of ocean-bound plastic bottles as part of its unique operating model for recycling in Haiti.

To date, HP has sourced over one million pounds (450 metric tonnes) – more than 35 million plastic bottles – of ocean-bound plastics from Haiti for its products.

In addition to protecting the oceans and the planet, HP’s ocean-bound plastic programs are also creating new opportunities for economic advancement and education in local communities. In Haiti, HP’s partnership with the First Mile Coalition has helped create more than 1,100 income opportunities for adults in the country and has provided 150 children with quality education, food, and medical assistance.

NextWave member companies are establishing ocean-bound plastics as a commodity to decrease the volume of plastic waste before it enters the ocean.

“Since joining NextWave Plastics last year, HP has been a standout partner, and we are thrilled to see the team continue to lead the way in scaling one of the most effective supply chains that is turning off the tap on ocean-bound plastics while improving the local community,” said Dune Ives, executive director of Lonely Whale, the convening entity for NextWave Plastics, a consortium of worldwide businesses committed to scaling the use of ocean-bound plastics.

NextWave member companies are currently on track, in alignment with UN Sustainable Development Goal 14.1, to divert a minimum of 25,000 tonnes of plastics, the equivalent of 1.2 billion single-use plastic water bottles, from entering the ocean by the end of the year 2025.

Ellen Jackowski, global head of Sustainability Strategy & Innovation, HP Inc, said, “Our circular economy strategy is about shifting our production to eliminate waste and enable a system that can sustain our levels of consumption in harmony with nature and our singular planet Earth for generations to come.”