More than 21,000 solar photovoltaic panels, with a capacity of 5.8MW, were installed on the roof of the Jaguar Land Rover Engine Manufacturing Centre in Wolverhampton, UK in 2014. It was then the largest solar PV facility in the UK, a position now held by the Shotwick solar farm in Flintshire, northeastern Wales. (Photo courtesy Jaguar Land Rover) Posted for media use.

LONDON, UK, June 11, 2019 (Maximpact.com News) – New homes and businesses creating and exporting electricity generated from renewable sources to the UK grid will be guaranteed a payment from suppliers under new laws introduced by the government on Monday.

Called the Smart Export Guarantee (SEG), the legislation will ensure that small-scale electricity generators installing solar, wind or other renewables with a capacity up to five megawatts (MW) will be paid for each unit of electricity they sell to the grid, as tracked by their smart meter.

Energy and Clean Growth Minister Chris Skidmore said as he introduced the legislation in Parliament, “The future of energy is local and the new smart export guarantee will ensure households that choose to become green energy generators will be guaranteed a payment for electricity supplied to the grid.”

“We want the energy market to innovate and it’s encouraging to see some suppliers already offering competitive export tariffs to reduce bills. We want more to follow suit, encouraging small-scale generation without adding to consumer bills, as we move towards a subsidy-free energy system and a net zero emissions economy,” Skidmore said.

The new legislation enables green energy generators utilizing anaerobic digestion, hydro, micro-combined heat and power, onshore wind, and solar photovoltaic systems to receive payment for electricity exported, not out of the country, but to the UK electrical grid.

Previously, the amount of electricity exported by small scale generators has often been unmeasured and flowed to the grid without metering. The rollout of smart meters allows a more precise approach, which in turn will make it easier to manage the electricity system as the number of small scale generators, as well as electric vehicles and small-scale storage batteries, increases.

The SEG policy will encourage small generators to sell their surplus electricity at the times when it is most needed and market prices are highest.

Encouraging suppliers to competitively bid for electricity will give households and businesses the best market price for their energy, while providing the local grid with more clean, green energy, as the UK transforms into a net zero emissions economy.

The Smart Export Guarantee places a legal obligation on energy suppliers with over 150,000 customers, which includes more than 90 percent of the UK’s retail market, to introduce export tariffs by January 1, 2020.

Some energy suppliers, including Octopus and Bulb, are already offering new smart tariffs, with some exceeding those offered under the previous subsidy scheme.

Octopus Energy CEO Greg Jackson said, “These smart export tariffs are game changing when it comes to harnessing the power of citizens to tackle climate change. They mean homes and businesses can be paid for producing clean electricity just like traditional generators, replacing old dirty power stations and pumping more renewable energy into the grid.

“This will help bring down prices for everyone as we use cheaper power generated locally by our neighbours,” Jackson said.

The Smart Export Guarantee will build on the previous government subsidy Feed-in Tariffs (FIT) system, which drove the installation of 850,000 small-scale renewable projects without passing on the cost to consumers. As a result, residential solar panels are now at least 50 percent cheaper than they were in 2011. The FIT scheme closed to new entrants on March 31.

Under the SEG, more generation will be located closer to peoples’ homes, greater demand will follow the increased use of electric vehicles, and there is enormous potential for greater home energy management through smart meters, smart appliances and smart tariffs. As a result, the government expects big changes to patterns of supply and demand in the future as the UK moves to a smarter, more flexible energy system.

Chief Executive of the UK’s Renewable Energy Association, Dr. Nina Skorupska CBE FEI, commented on the new legislation, saying, “Small scale renewable power deployment is good for businesses, good for homes, and good for our climate. The Government confirming that they will legislate for a Smart Export Guarantee is very positive and acknowledges innovation in the market, how the falling price of batteries and renewable energy can support lower bills, and how local generation and storage can reduce grid constraints.”

The government is keen to support households and businesses in being able to store energy in batteries in their homes and on their business premises. These consumers will monitor their energy use on their smart meters, respond to price signals and choose the most economical times to charge their electric cars and sell their electricity back to the grid.

In turn, this will help cut consumer bills, reduce the strain on energy networks, and give consumers more control of their energy use.

Small-scale renewable energy generators can reduce their own energy costs in their homes, office buildings and factories by becoming more energy efficient so they have more surplus energy to sell.

Maximpact, the consulting company that offers energy audits in the UK and Ireland, finds that energy costs in factories, facilities and buildings can be reduced up to 60 percent by minimizing energy waste, consumption and carbon emissions. 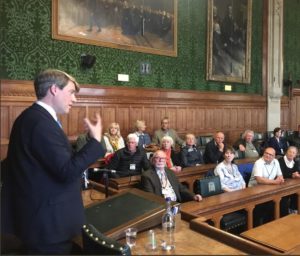 The SEG will complement the deployment of smart, flexible technologies such as storage and demand-side response. A smart and flexible system could save £17-40 billion across the electricity system to 2050, said Skidmore.

Skidmore told Parliament on Monday, “The SEG will ensure that small-scale low carbon generators are reimbursed for the electricity they export to the grid and can act as a springboard to the development of a robust and competitive market solutions.”

“SEG allows the private sector to innovate and invest, while small-scale generation technologies can compete on their own merits,” he said. “We expect that the electricity market to grow smarter and more flexible, and consumers will be offered an increasing range of innovative smart products and services. These services will support the integration and optimization of onsite low carbon generation.”

The results of public consultations on policy proposals for a Smart Export Guarantee were released by the Department of Business, Energy and Industrial Strategy (BEIS) earlier this month in the publication, “The Future for Small-Scale Lowcarbon Generation.“

The consultations ran for eight weeks between January and March 2019 and received 3,360 written responses, most supportive of the new SEG scheme.

On the question of whether the SEG would provide a suitable and practical route to market for exported electricity from small-scale generators, the response was mixed. Many generators, installers, community groups, some NGOs and individuals, including over 3,000 campaign responses, argued that the SEG as currently proposed would not be sufficient to encourage future growth in the small-scale sector.

Many considered that generators and households would not be fairly compensated for the market value of their exported electricity unless the SEG mandated a floor price that was guaranteed over a long term. They argued that this could impact on the UK’s ability to meet carbon targets, and that the proposed approach would not be an effective driver of employment or investment.

There was concern that contract lengths offered by suppliers may also vary, which could make it difficult for community organizations in particular to secure affordable finance to develop projects.

The government agency responded by saying, “The SEG will ensure low-carbon generators do not export electricity to the grid for free and could act as a springboard to the development of a robust and competitive market for small scale low-carbon generation. The government expects that over time, as the cost of small scale generation and storage drops, and domestic-scale energy management technology enabled by smart metering becomes more widespread, there will be an increase in the number of innovative tariffs and offerings in the market.”

“A key measure of the success of the SEG will be the development of a competitive and robust export market, with suppliers offering meaningful and innovative tariffs. This should enable small-scale low-carbon and smart technologies to compete on a level playing field, as we move away from subsidies to market based solutions,” the BEIS said.

The Office of Gas and Electricity Markets, the government regulator for the electricity and natural gas markets in Great Britain, will prepare an annual report on the provisions made by suppliers for smaller scale exporters, including the range, nature and uptake of SEG tariffs. The government says it will review this report to monitor whether the market is delivering an effective and competitive range of options for small exporters.

The new SEG plan comes as the government unveils the winners of the latest round of the Energy Entrepreneurs Fund this week. One of the winners, Brill Power, a new spin-out company from Oxford University, has been awarded £686,000 in grant funding to explore extending the life of lithium-ion battery packs for household energy storage and to bring down their cost for consumers.

Since its start in 2012, the UK government has invested around £75 million of grant money in more than 130 energy efficiency, power generation, and heat and electricity storage companies through the Energy Entrepreneurs Fund. Those companies have leveraged over £100 million in private funding and are still attracting further investment.