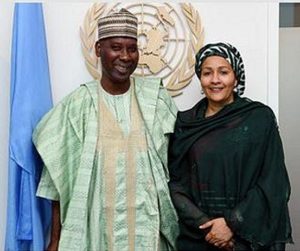 UN Deputy Secretary-General Amina Mohammed of Nigeria (right) met with Tijjani Muhammad Bande when he was the new Permanent Representative of Nigeria to the United Nations, May 3, 2017, New York (Photo by Evan Schneider courtesy UN) Posted for media use

NEW YORK, New York, October 1, 2019 (Maximpact.com News) – The first United Nations summit on the progress of the 2030 Agenda for Sustainable Development closed on a hopeful note Thursday, with UN Deputy Secretary-General Amina Mohammed of Nigeria declaring that the two-day event had been a reminder of “the boundless potential of humanity to create a better future for all.”

Mohammed told the delegates at the Sustainable Development Goals Summit that she had been encouraged by the “spoken word, the voice of youth, the commitment of civil society, the power of an active citizenry and the leadership of our governments,” on display during the two-day conference.

She said three important outcomes emerged from the Summit:

1 – a renewed commitment from world leaders to implement the Sustainable Development Agenda, which Mohammed described as critical to respond to the world’s greatest challenges;

2 – an acknowledgement that the Sustainable Development Goals are off track, and a determination to step up efforts to achieve them;

3 – clarity on the task ahead, with a decisive decade left to “nurture more ambitious global action; local action and people action.” 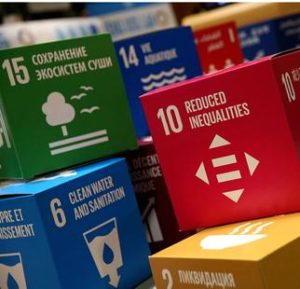 One of the many symbols of the 17 Sustainable Development Goals that decorated United Nations Headquarters in New York during the week of five summits on sustainable development and climate change, September 23-27, 2019 (Photo courtesy Earth Negotiations Bulletin) Posted for media use

Tijjani Muhammad-Bande, also from Nigeria, the incoming president of the UN General Assembly, said that the 10 years leading up to the 2030 deadline for the Agenda will be a “Decade of Implementation.” He expressed hope that, “We will ensure more integration of the 2030 Agenda into our National Development Plans, mobilize resources and invest in programs and sectors that are more likely to engender greater acceleration.”

Muhammad-Bande highlighted the involvement of the private sector at the Sustainable Development Goals Business Forum, which took place on Wednesday, where companies showcased actions, innovative technologies and sustainable financing strategies, aimed at creating a better world for all.

“I am confident that the business leaders that joined us this week will continue to encourage and inspire actions” he said. “While governments are responsible for national implementation, they are unable, on their own, to achieve the goals.”

During the Business Forum, Lise Kingo of Denmark, who is CEO and executive director of the UN Global Compact, shared the results of a survey in the newly published UN Global Compact Progress Report 2019, which shows that 81 percent of Global Compact participants reported that they are taking action on the global Sustainable Development Goals. 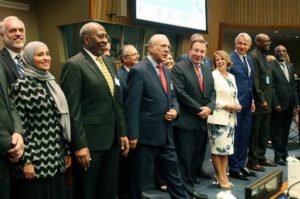 On September 25, the UN hosted the launch event for the Global Hub on the Governance for the SDGs, a joint initiative of the Organization for Economic Cooperation and Development (OECD) and the UN Development Programme.

The Hub aims to facilitate targeted support to interested countries tackling the specific governance challenges of SDG implementation. It will provide a space to build leadership capacity on critical governance issues, and for national experts and practitioners to interact and learn from each other, in support of the achievement of the 2030 Agenda.

The Hub will align itself with other existing and planned SDG initiatives to leverage the full potential of SDGs 16 and 17 as key enablers of the entire 2030 Agenda.

SDG 16 is: “Promote peaceful and inclusive societies for sustainable development, provide access to justice for all and build effective, accountable and inclusive institutions at all levels.”

SDG 17 is: Strengthen and revitalize the global partnership for sustainable development.

The SDG Summit resulted in the adoption of the Political Declaration, “Gearing up for a decade of action and delivery for sustainable development.”

The Declaration states, “We stand firm in our determination to implement the 2030 Agenda as a plan of action for people, planet, prosperity, peace and partnership – a plan to free humanity from the tyranny of poverty and heal and secure our planet for future generations.”

The leaders assured the poorest countries that they would not be abandoned. “We reaffirm the commitment at the very heart of the 2030 Agenda to leave no

one behind. We will take more tangible steps to support people in vulnerable situations and the most vulnerable countries and to reach the furthest behind first,” the Political Declaration states.

“It is encouraging to see that the momentum to step up action is growing,” said Liu, “with over 100 new Acceleration Actions registered for the goals ahead of the SDG Summit.” Acceleration Actions are initiatives that speed up progress on sustainable development and boost action on climate change. 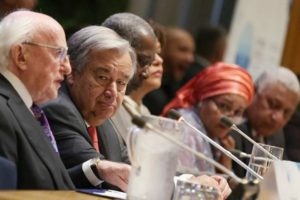 At a UN meeting to review the progress of Small Island Developing States (SIDS) in coping with climate change, from left: President of Ireland Michael Higgins, UN Secretary-General Antonio Guterres, and SIDS leaders from across the world. September 27, 2019, New York (Photo courtesy Earth Negotiations Bulletin) Posted for media use

UN Secretary-General António Guterres issued a global call for a “decade of action” to accelerate progress towards the Sustainable Development Goals. “We must regain the trust of the people and respond to the experience of alienation generated by the current model of globalization,” he said.

In his opening remarks to the High-Level Dialogue on Financing for Development at the UN’s New York headquarters on September 26, Guterres outlined his roadmap for financing the 2030 Agenda for Sustainable Development, the UN’s plan for the transition to a healthier planet and a fairer world.

1 – aligning the international financing system behind the Sustainable Development Goals;

Financing, concluded Gutterres, can help the world get back on track for the “decade of action” leading up to the 2030 deadline. “Let us all raise ambition for development finance, climate finance, and finance that will enable markets to grow, businesses to thrive and people to live in dignity,” he said.

“How you, as business leaders, respond can be a defining moment for our global goals. Only public-private cooperation can deliver sustainable development,” Guterres said.

The dialogue on financing for development is part of a week-long series of high-level meetings at UN Headquarters in New York on issues related to the 2030 Agenda for Sustainable Development and climate change.

The secretary-general said that while not enough financing is being mobilized currently to achieve the Sustainable Development Goals, particularly in developing countries, and that rising levels of debt are limiting spending, he also observed that financial markets are increasingly integrating sustainability into their operations, and banking institutions have committed to a more sustainable way of doing business.

A total of 130 banks from 49 countries with more than $47 trillion in assets in total, a third of the global industry, on September 22 signed on to new UN-backed Principles for Responsible Banking in a boost for climate action and the shift to green models of economic growth.

The Principles were developed by a core group of 30 founding banks through an innovative global partnership between banks and the UN Environment Programme (UNEP) Finance Initiative.

The banking and private sectors can benefit from the investment they put into backing this transition, UN officials concluded. It is estimated that addressing the SDGs could unlock $12 trillion in business savings and revenue annually and create 380 million more jobs by 2030.

“It is time to transcend words to action, the only way to transform our world,” General Assembly President Muhammad-Bande declared.

“A sustainable development future requires investing in the present,” he said. “We have a clearly stated roadmap and due date. Let us act now and work together to take bold action to deliver for all.”

Financing for Development and Self-reliance

President of Ghana Nana Addo Dankwa Akufo-Addo and Sola David-Borha, CEO of the Africa Regions Standard Bank Group, both delivered keynote speeches with a focus on shifting from aid to self-reliance and development.

“We have to harness effectively our own resources,” said Akufo-Addo, “and deploy them creatively and efficiently, to finance the rapid economic and social transformation that we seek. We need a lot of resources, to generate the prosperity we want in Africa.”

David-Borha told the meeting that Standard Bank and other banks that have signed the Principles for Responsible Banking, have committed to aligning their business strategies to the SDGs.

Governments alone, she said, cannot fund the SDGs, and the financing that Africa has so far received is just “a drop in the ocean,” which is why the public and private sectors must work together. “The engagement and dialogue between both sides must step up considerably, so that trust and mutual respect can be built,” she urged.

Inger Andersen, executive director of the UN Environment Programme (UNEP), told the bankers, “When the financial system shifts its capital away from resource-hungry, brown investments to those that back nature as solution, everybody wins in the long-term.”

While action on climate change is growing, it is still far short of what is needed to meet the 1.5°C target of the Paris Agreement. Meanwhile, biodiversity continues to decline at alarming rates and pollution claims millions of lives each year, said Andersen, immediate past executive director of the International Union for the Conservation of Nature (IUCN) <www.iucn.org>. 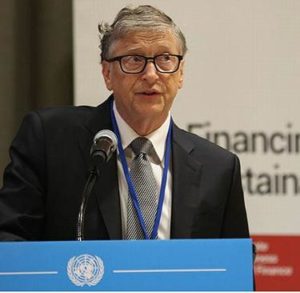 Bill Gates, principal founder of Microsoft, and co-chair of the Bill and Melinda Gates Foundation, told delegates that no single solution exists to getting the Sustainable Development Goals back on track, but recommended a focus on targeting specific needs, geographies and groups of people.

Gates said that one-third of the finance needed for sustainable development could come from new tax revenues, accompanied by more efficient spending and foreign aid. But he counseled countries to make their tax policies progressive, to ensure faith in financial systems, and provide essential health and education services.

Charles, Prince of Wales, first in line to the British throne, said in a video message to delegates, “The transition to a sustainable future is essential for the ultimate viability of life as we know it.”

Vast numbers of young people around the world, he continued, are “fed up” in the face of an unprecedented global emergency.

The prince said the current market system is no longer fit for purpose, and a new approach rooted in sustainable markets is needed to move from billions to trillions, to finance sustainable development.

Prince Charles said that he could “only pray” leaders will embrace the “utmost urgency” of what is required, and that they will commit themselves, and inspire others, to practical action in order to finance the Sustainable Development Goals and climate action.