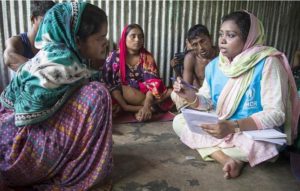 GENEVA, Switzerland, December 19, 2019 (Maximpact.com News) – The world’s first Global Refugee Forum ended Wednesday with hundreds of pledges and a “decisive shift” in approach. More than 770 pledges were made that ranged from financial support to more inclusive government policies to improving access to refugee employment, education, clean energy and resettlement.

More than 2,000 government, United Nations, and business leaders as well as representatives from civil society and humanitarian agencies gathered in Geneva this week for the first-ever Global Refugee Forum.

The goal of the three-day event, which opened Monday, was to generate new approaches and long-term commitments to help refugees and the communities that host them.

At least 70 million people worldwide are forcibly displaced by war, conflict and persecution. Among them are over 25 million refugees, who have fled across international borders and are unable to return to their homes.

Organizers of the Forum rolled out the red carpet for top officials from Germany, Turkey, Pakistan, Costa Rica, Ethiopia, and Somalia as well as other prominent individuals.

“Refugee situations are ‘crises’ only when we let them become so, by thinking short term,” said UN refugee chief Filippo Grandi in a statement. “At this Forum, we have seen a decisive shift towards the longer-term view.”

UNHCR said it had received a number of major financial pledges, including US$2.2 billion from the World Bank Group for refugees and host communities.

Up to $2.2 billion will be available for a dedicated window for refugees and host communities over the next three years, the World Bank announced at the Global Refugee Forum. The financing is part of the recently-approved 19th replenishment of the International Development Association (IDA19), the World Bank’s fund for the poorest, that will run from July 2020 to June 2023.

The World Bank says it has been scaling up its support to refugees and host communities for several years, in response to the growing global crisis of forced displacement.

“Making long-term investments that address the needs of both refugees and the communities that host them is a critical part of the long-term solution to this growing challenge,” van Tortsenburg said.

The World Bank also pledged a separate $2.5 billion funding window to boost the private sector and create jobs in countries affected by fragility, conflict and violence, including low-income refugee-hosting countries.

States, businesses and other entities jointly pledged more than US$2 billion for refugees and host communities, while more resettlement places were offered in third countries, including 30,000 in European Union Member States next year.

“This has the makings of a success,” Grandi told participants. “Making it a success is incumbent on all of us.”

The latest figures show Turkey has hosted the largest number of refugees, with 3.7 million, mainly those who have fled Syria.

The UNHCR says it hopes this gathering will prove to be a game-changer in the way refugees and the countries and communities that host them are treated and supported.

UNHCR spokesman Babar Baloch told reporters the world’s piecemeal approach in dealing with displacement and refugee affairs has to change.

“This is bringing everyone together at the same place, on the same table. But also trying to work out a way forward in terms of how we deal with displacement issues. It is a clear call of responsibility sharing,” he said.

Baloch said everyone at all levels of government, development, financial, civil and other sectors of society has to take responsibility and play a role in caring for the well-being of refugees.

Syrian displaced families, who fled violence after the Turkish offensive in Syria, sit at a refugee camp in Bardarash on the outskirts of Dohuk, Iraq, Oct. 25, 2019.

FILE – Syrian displaced families, who fled violence after the Turkish offensive in Syria, sit at a refugee camp in Bardarash on the outskirts of Dohuk, Iraq, Oct. 25, 2019.

“It is about changing policies toward refugees. It is about responsibility sharing with the world’s largest refugee hosting nations like pledging more places for resettlement. But it is also changing policies including refugees in education, in health services and other sectors where they can benefit like other people,” he said.

The private sector also has an increasingly important role to play in responding to the growing needs of refugees. More than 100 companies and foundations, including big global corporations such as IKEA and Lego attended the Forum.

The scale and reach of the assistance became clear in a pledge by the IKEA Foundation, Ingka Group and Inter IKEA Group to assist 2,500 refugees through job training and language skills initiatives at 300 IKEA stores and units in 30 countries through 2022. 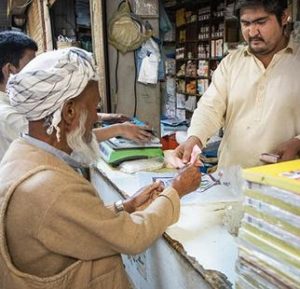 Azeem, 27, at his shop in Karachi, Pakistan. Afghan refugees like Azeem have recently been allowed to open bank accounts. 2019 (Photo by Roger Arnold courtesy UNHCR)

The commitment is boosted by the IKEA Foundation’s promise to provide 100 million euros in program grants over the next five years.

“It is good business to do good, and we at IKEA have the fortune to think in generations,” Tolga Öncu, retail operations manager at Ingka Group told a joint news conference with executives from The LEGO Foundation and telecoms heavyweight Vodafone.

“It is good business to do good, and we at IKEA have the fortune to think in generations.”

More than half of the world’s 25.9 million refugees are children. To improve their lives, The LEGO Foundation announced a US$100 million grant for play-based learning through PlayMatters, an initiative to strengthen resilience and build the social, emotional, cognitive, physical and creative skills of young refugee children.

“We are particularly focused on the early years of education,” said John Goodwin, CEO of The Lego Foundation. “We feel that it’s imperative that we do all that we can to provide those children with the start that they need, both to overcome the adversity that they have experienced and to put them on a trajectory for a successful, thriving life.”

Stepping up to the plate, the Vodafone Foundation made a commitment to expand the high-quality digital education it provides throught its Instant Network Schools program, from 85,000 young refugees to more than 500,000. It aims to boost the number of Instant Network Schools in Kenya, Tanzania and the Democratic Republic of the Congo, connecting students to educational resources and the wider online world. Other countries will follow by 2025.

Maximpact’s English for Employment and Social Integration programme for refugees provides access to English language education. Language is the main barrier to integration of refugees in their new host countries. We have developed and have been delivering online live language tuition for over three years in the UK. Through our online live tuition and customised teaching methodology, refugees who were unable to attend face-to-face courses due to child care, transportation, health/disabilities and living in rural areas – now have access to learning.  Currently our programme is funded by the UK Department of Economies through the VPRS and with more funding from donors we would be able to provide access to more refugees. If you are interested in finding our more about how to fund more programmes contact us at carolinek@maximpact.com

Reviews from the Fall 2019 classes:

“I really like this because it is comfortable because I live far away from the college as I have young children and this class allows me to learn the English language and I am happy with that”. Reem

“I like studying online first it improves my spoken language second I suffering from illness and studying at home is better for me to to the college and also I have a small kids to take care so its really perfect for me.” Eiman

“I like the class because l can’t go to the college and l have some problems with my health.” Suhad

“The teacher is really simple in both ways in the official ways like sending letters to Gov, association and explaining the slang in the simple ways to know the difference, I go to college once a week but the level is really hard I cant catch up with them and I cant attend other classes bcz I’m taking care of 3 kids and there are 2 of the disabled.” Ahmad

“The way of learning is perfect and gives us confidence I love online course bcz I cant attend college I have a new born baby i should take care of him , plus I have back pains and another sickness cant sit to much” Asmaa