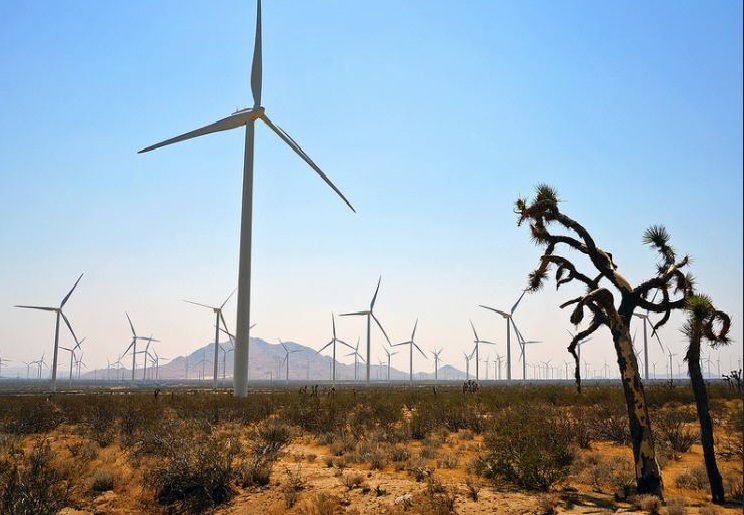 America’s most powerful wind farm – 1.5 gigawatts in size, generating enough electricity for a city of millions – is on the edge of the Mojave Desert at the foot of the Tehachapi Pass, site of one of the earliest and still largest collections of windmills in the world. In total, there are more than 5,000 wind turbines in the area. (Photo by Steve Boland) Creative Commons license via Flickr

WASHINGTON, DC, December 22, 2016 (Maximpact.com News) – More than 450 organizations, local officials, academics, civic leaders and businesses are calling on Congress to support a shift to powering the United States entirely with renewable energy by the year 2050.

Although the lawmakers are on holiday recess, the renewable energy advocates Wednesday delivered a letter to Congress. The signers are urging support for H.Res. 540 introduced by Congressman Raúl Grijalva of Arizona and S.Res. 632 introduced by Senators Edward Markey of Massachusetts and Jeff Merkley of Oregon, all Democrats.

“Burning coal, oil and gas is polluting our air, water and land. It is harming our health and changing our climate even faster than scientists predicted,” the letter warns. “At the same time, low-income communities, communities of color, and indigenous people often bear a disproportionate share of the impact.”

Senators supporting the resolution include Democrats Ben Cardin of Maryland, Mazie Hirono and Brian Schatz of Hawaii, Elizabeth Warren of Massachusetts and Al Franken of Minnesota as well as Vermont Independent Bernie Sanders, who ran in the presidential primary as a Democrat.

“As a technological giant, the United States must continue to lead the clean energy revolution,” said Senator Markey. “ The question is no longer if we can power our country with 100 percent renewable energy, it’s when and how we will make the transition.”

The letter points out that dozens of major corporations, including General Motors, Apple, and Walmart, have set goals to meet all of their energy needs with renewable energy. Google announced last week that in 2017, renewable energy will power 100 percent of its global operations, according to the American Wind Energy Association.

“America needs a rapid transition to clean, renewable energy and our leaders need to get on board,” said Sargent.

The letter stresses the environmental and economic imperatives for shifting to renewable energy – to help consumers, support the economy and national security of the United States, and avoid the worst impacts of climate change.

The letter says, in part, “We need to transform the way we power the country – and we need to do it fast. But, we still have a long way to go. That’s why we are calling for swift action to transition to 100 percent renewable energy.”

For the past eight years, President Barack Obama has been a leader in bringing the world to act against climate change by moving away from fossil fuels and investing in renewables. The Obama initiative and partnership with China brought the two biggest greenhouse gas emitters into alignment on this issue. It culminated in the Paris Agreement on climate, which took effect in November, less than a year after it was agreed in December 2015, lightning speed for an international agreement.

But the renewable energy advocates will have a steep uphill path if they try to persuade the incoming administration of President-elect Donald Trump, whose Cabinet nominations demonstrate that he wants to rely on fossil fuels, extracting the maximum amount of coal, oil and gas without delay.

Trump has chosen the CEO of the world’s largest oil company, Rex Tillerson of Exxon Mobil, as his nominee for secretary of state, fossil fuel advocate and climate denier Oklahoma Attorney General Scott Pruitt as head of the Environmental Protection Agency,  former Texas governor Rick Perry, a fossil fuel supporter, as energy secretary, and Ryan Zinke of Montana to head the Department of the Interior.

Jeff Turrentine of the nonprofit Natural Resources Defense Council today called them “the Four Horsemen of the Trumpocalypse.”

There are currently 310,000 people in the United States employed in the solar industry and 88,000 in the wind industry.

The United States is projected to add more electric generating capacity from solar and wind than from any other source in 2016. More than half of all new electricity capacity added in the world in 2015 was from renewable sources.

“Climate change is both the greatest threat facing humankind, and also a tremendous economic opportunity if our nation rises to meet it,” said Congressman Grijalva. “Every day our energy future becomes more obvious – either we live in the past and continue to degrade our environment, or we embrace the future of renewable energy which ensures our continued success on a global scale and leaves our children a clean and healthy planet.”

“Moving to 100 percent clean energy will power job creation that is good for all creation. We can and will meet this goal and now, more than ever, it is critical that we stand up and fight for our clean energy future,” said Grijalva.

The resolution is not just a pipe dream – it’s technically feasible. According to the National Renewable Energy Laboratory, the United States has the technical potential to generate more than 100 times the quantity of electricity it consumes each year as of 2016 solely from wind, solar, and other renewable resources.

“Today’s resolution sends a message loud and clear to our Senate colleagues – it’s time to get serious about our climate efforts with big, bold and rapid moves to accelerate the clean energy economy,” said Senator Merkley. “Transitioning to clean and renewable energy is not only the right thing to do for clean air and a strong economy, it is what we must do to save our beautiful blue-green planet.”