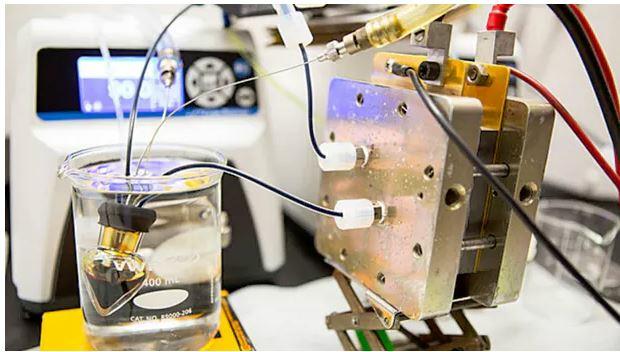 The team has developed a “high-capacity flow battery” that stores energy in organic molecules called quinones and in the food additive ferrocyanide.

To accomplish this, the Harvard team replaced metal ions used as conventional battery electrolyte materials with quinones, molecules that store energy in plants and animals.

“Now, after considering about a million different quinones, we have developed a new class of battery electrolyte material that expands the possibilities of what we can do,” said Kaixiang Lin, a Ph.D. student in chemistry at Harvard and first author of the paper.

That advance was a game-changer, and the Harvard team now is delivering what they call “the first high-performance, non-flammable, non-toxic, non-corrosive, low-cost chemicals that could enable large-scale, inexpensive electricity storage.“

“Its simple synthesis means it should be manufacturable on a large scale at a very low cost, which is an important goal of this project,” said Lin, a chemistry graduate student.

Vitamin B2, also called riboflavin, is one of eight B vitamins. All the B vitamins help the body to convert carbohydrates in food into fuel in the form of glucose, which is used to produce energy, and metabolize fats and protein.

The key difference between B2 and quinones is that nitrogen atoms, instead of oxygen atoms, are involved in picking up and giving off electrons.

“With only a couple of tweaks to the original B2 molecule, this new group of molecules becomes a good candidate for alkaline flow batteries,” said Dr. Michael Aziz, a Harvard professor of materials science.

Lin explained, “They have high stability and solubility and provide high battery voltage and storage capacity. Because vitamins are remarkably easy to make, this molecule could be manufactured on a large scale at a very low cost.”

“We designed these molecules to suit the needs of our battery, but really it was nature that hinted at this way to store energy,” said Dr. Roy Gordon, co-senior author of the paper and a Harvard professor of chemistry and materials science. “Nature came up with similar molecules that are very important in storing energy in our bodies.”

The team will continue to explore quinones, as well as this new universe of molecules, in pursuit of a high-performing, long-lasting and inexpensive flow battery.

Harvard’s Office of Technology Development has been working with the research team to navigate the shifting complexities of the energy storage market and build relationships with companies well positioned to commercialize the new chemistries.

The ability to inexpensively store large amounts of electrical energy is of increasing importance, with the growing fraction of electric generation from intermittent renewable sources such as wind and solar, the study’s authors recognize.

As this fraction increases, problems associated with the mismatch between power supply from wind and solar and grid demand become more severe, they say.

While the versatile quinones show great promise for organic flow batteries, the Harvard researchers continue to explore other organic molecules in pursuit of even better performance.

The work was partly funded by a Department of Energy ARPA-E award, the National Science Foundation and the Massachusetts Clean Energy Technology Center and funded in part through the Harvard School of Engineering and Applied Sciences. The research also was supported by the Odyssey Cluster and Research Computing of Harvard University’s Faculty of Arts and Sciences.

Theoretical work was funded in part through the Extreme Science and Engineering Discovery Environment, which is supported by the National Science Foundation.

Süleyman Er performed work as part of the Fellowships for Young Energy Scientists program of the Foundation for Fundamental Research on Matter, which is part of the Netherlands Organization for Scientific Research.

The new research is published in the journal “Nature Energy“.

Featured image : Dr, Michael Azia is the Gene and Tracy Sykes Professor of Materials and Energy Technologies at Harvard, he is a participant in the Materials Research Science and Engineering Center, a faculty associate, Center for Nanoscale Systems, and a faculty associate, Harvard University Center for the Environment (Photo courtesy Harvard University) Posted for media use.