Wait: Don’t Toss That Food, It Could Fuel the Car

RICHLAND, Washington, February 26, 2021 (Maximpact.comNews) – “When we eat, our bodies convert food into energy that fuels our lives. But what happens to the energy stored in the 80 billion pounds (40 million tons) of food thrown away annually in America?” asks Steven Ashby, director of the U.S. Dept. of Energy’s Pacific Northwest National Laboratory in Richland. As part of advancing sustainable energy solutions, scientists at the lab he runs are converting tons of food waste into clean, renewable biofuel that could power cars, planes and trains.

Forty percent of the food produced in the United States is wasted, which translates to $162 billion in annual food waste, according to the National Conference of State Legislators. In a country in which nearly 50 million Americans face food insecurity, it’s estimated the equivalent of 58 billion meals go to waste each year.

And wasting food during a pandemic is taking food out of the mouths of other Americans. Since the COVID-19 pandemic triggered lockdowns from March 2020, with illness, job loss and business closures, food banks are handing out meals at an unprecedented pace.

Compared with 2019, an Associated Press data analysis found a sharp rise in the amount of food distributed by the more than 350 food banks across the United States, which serve 63,000 affiliated pantries and shelters.

If the food is not eaten there, it is thrown out, but food waste is not benign even once it has been discarded. Most wasted food goes to landfills or municipal incinerators. As the food waste decomposes, it generates methane, a potent greenhouse gas that heats up the climate if released into the atmosphere.

For decades, PNNL researchers have supported the Energy Department’s goal to cost-effectively produce fuels derived from plants or animal wastes rather than from petroleum. They have developed technologies to produce these biofuels from feedstocks such as agricultural residues, forest byproducts, algae, and even sewer sludge and manure.

In recent efforts, the PNNL researchers successfully converted food waste into an energy-dense biofuel that could help replace today’s fossil fuels. They worked with food waste from two large institutions based in Washington State – Joint Base Lewis-McChord, an Army-Air Force base with a population of more than 13,000, and Coyote Ridge Corrections Center, with over 2,000 inmates the largest prison by capacity in the state. 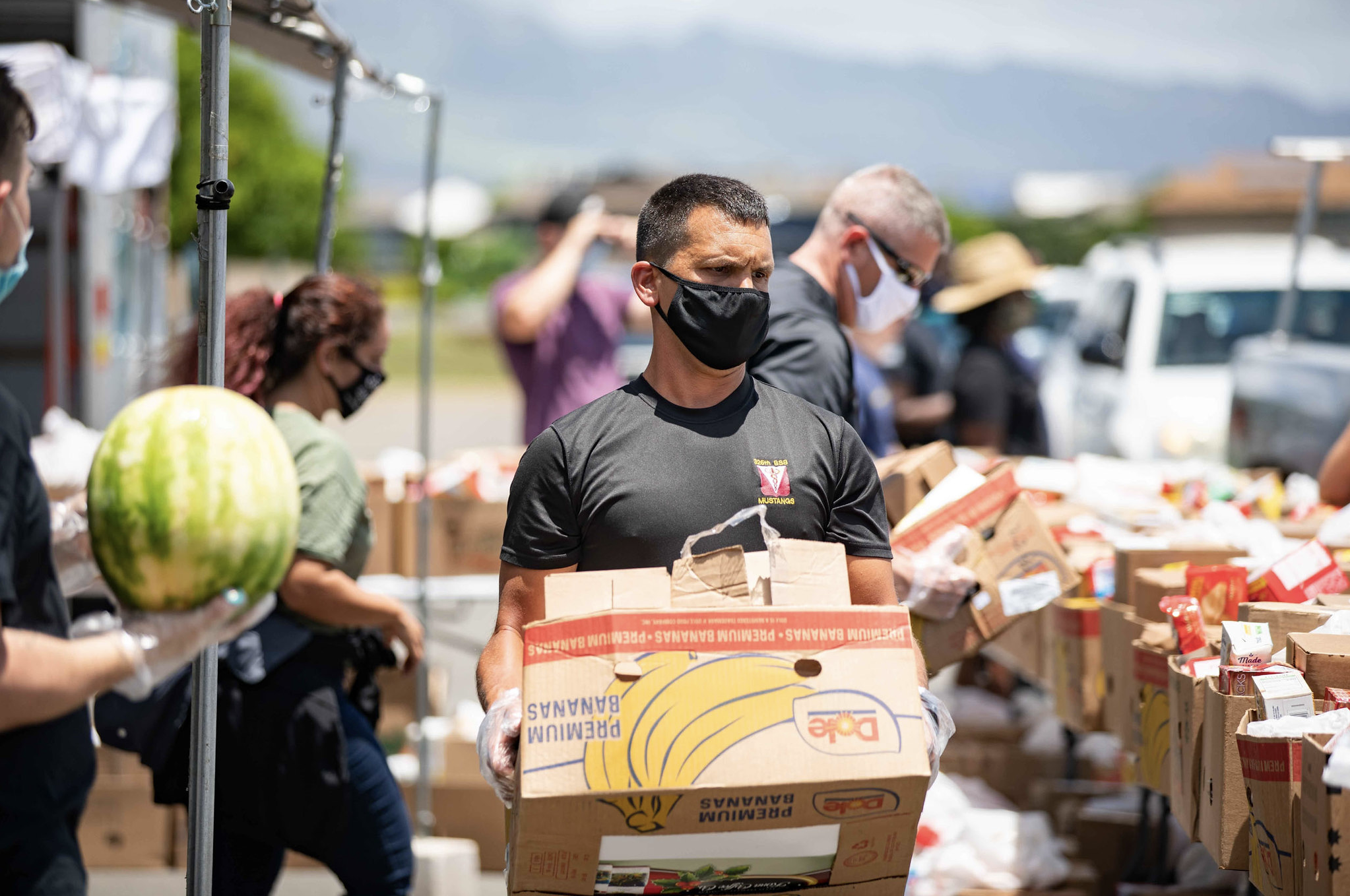 Early results suggest food waste might deliver what Ashby called “a trifecta of efficiency, economic and environmental benefits,” in an opinion article published in the “Tri-City Herald” newspaper on February 22.

First, from an efficiency standpoint, he writes, food waste’s higher fat content and lower mineral content allows more gallons of biofuel to be produced per ton of food waste than with other feedstocks. Easily made into a pumpable slurry, food waste simplifies production and minimizes the cost of pre-processing that other feedstocks need.

Second, it may be possible to obtain food waste less expensively than other feedstocks with higher cultivation and harvesting expenses. It is already being generated in abundance, and people are willing to pay for its disposal, Ashby points out in the article.

“Using food waste rather than growing crops such as corn or soybeans to produce biofuel also prevents arable land from being devoted to fuel rather than food,” he says.

Third, turning this waste into fuel would keep it from going to landfills, which is important given recent bans specific to food wastes. Six states: California, Connecticut, Massachusetts, New York, Rhode Island, and Vermont, have passed laws to keep food out of landfills.

As a result, dairy farmers in Massachusetts have come up with one solution to the problem. They’re using food waste to create electricity. They feed waste into anaerobic digesters, built and operated by Vanguard Renewables, which capture the methane emissions and make renewable energy. Their process begins by gathering wasted food from around the state, including from many Whole Foods locations, according to a November 2019 report  <https://www.npr.org/sections/thesalt/2019/11/30/783001327/chew-on-this-farmers-are-using-food-waste-to-make-electricity> on National Public Radio.

In March 2020, the Food Waste Reduction Alliance, a collaborative effort of the Consumer Brands Association, the Food Industry Association, and the National Restaurant Association, released a guidebook, “Messy but Worth It: Lessons Learned from Fighting Food Waste,” <https://foodwastealliance.org/wp-content/uploads/2020/04/FoodWaste_Final_small.pdf>that features advice on to keep perfectly good food out of landfills.

For their guide, Alliance interviewers spoke with food manufacturers, grocers and foodservice operators to get their best tips on how to successfully launch a food waste reduction program and to sustainably nurture it over time. Five key recommendations include:

* – Recover and redistribute surplus food to feed the community with a nonprofit partner.

* – Measure current food waste status or it won’t get managed.

Or, Feed It to the Muffin Monster 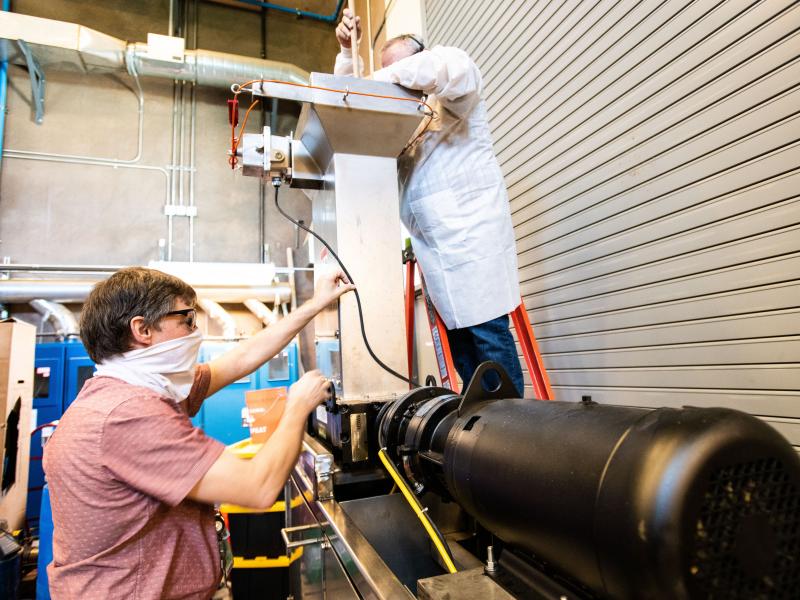 PNNL scientists pursuing Ashby’s “trifecta” of wins start by blending the waste with the help of customized equipment known as the Muffin Monster that grinds up everything from bones and gristle to seeds, wrappers and packaging. The resulting mush is warmed so it can be continuously pumped into a reactor and converted into fuel.

To expand the base of biomass resources to gain efficiencies needed for large-scale adoption, they are working with resource assessment teams, testing feedstock blends that could come together in local hubs.

For instance, they are assessing the resources available within a 50-mile radius of Detroit, Michigan, to determine the mixture of food waste, sewage sludge, and fats, oils and greases that could be consolidated and used to produce biofuel.

“Including food waste would allow biofuel production plants to be up to 10 times larger in urban areas – significant progress toward the Department of Energy’s cost and emission-reduction targets for biofuels,” Ashby writes.

Meanwhile, economists are modeling various combinations of feedstocks and production factors to determine how mass-produced biofuels might be cost-competitive with conventional petroleum-based fuels and compatible with today’s infrastructure.

Ashby explains that PNNL researchers are working with a waste disposal company that already gathers and separates food and other organic wastes from homes and businesses in several cities, creating daily batches of slurry. The scientists will study the composition of this waste and use it in experiments to produce biofuel.

“So,” concluded Ashby, “as you scrape tonight’s dinner plate, rest a bit easier knowing your kitchen scraps might one day help reduce America’s dependence on fossil fuels. And be sure to think of the innovative PNNL researchers who provide that food for thought.”