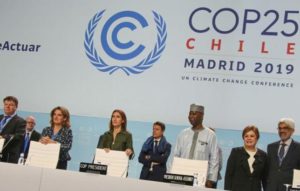 MADRID, Spain, December 17, 2019 (Maximpact.com News) – Climate change negotiations lasting 16 days have failed to find common ground on international carbon trading rules, one of the important issues at the UN’s COP25 climate summit in Madrid, which wrapped Sunday with a weak accord despite urging from the United Nations and civil society groups to address the climate emergency with “ambition.”

A minimal agreement was reached after over two weeks of talks, as over 26,000 delegates from throughout the world convened at the COP25. Delegates were from the 196 nations plus the European Union that are Parties to the Paris Climate Agreement. They met in Madrid to negotiate the final details of the treaty before it enters into force next year.

Their main task was to finalize Article 6 of the Paris treaty dealing with international carbon trading. But a final deal was postponed until 2020, amid differences over the details of accounting rules for carbon dioxide emissions, which revealed a deep divide between countries supporting greater climate ambition and those satisfied with the status quo.

The rest of the text reflects a weak call for governments to be more ambitious in their 2020 climate commitments, which under the Paris accord must be submitted before next year’s COP26 in Glasgow, Scotland. 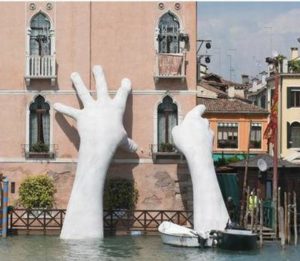 A smaller version of Lorenzo Quinn’s monumental sculpture “Support” was on display at the United Nations Climate Change Conference COP25 in Madrid to remind participants of rising sea levels that threaten Venice and all coastal cities. The installation, shown here, was first unveiled by Quinn at the Venice Biennale in 2017. Two gigantic hands of a child emerge from the Grand Canal in Venice to protect and support a historical building threatened by climate-induced flooding. Given the 50-year-record floods that hit Venice this month, Quinn’s alert is more urgent than ever. 2019 (Photo courtesy UNFCCC)

The landmark 2015 Paris Agreement is a voluntary accord that asks countries to cut their greenhouse gas emissions to ensure that global temperatures do not rise by more than 2°C by the end of this century, while attempting to contain warming at 1.5°C above pre-industrial levels.

During COP25, the World Meteorological Organization announced that the global average temperature reached 1.1°C above pre-industrial levels in 2019, concluding a decade of exceptional global heat,

The conference ended with a declaration on the “urgent need” to close the gap between existing emissions pledges and the temperature goals of the Paris agreement.

Even COP25 President Carolina Schmidt of Chile, where the talks were originally scheduled before they were relocated to Madrid to avoid deadly Chilean public protests over economic inequality, acknowledged that the conference had “remained indebted to the planet.”

UN Secretary-general António Guterres could not hide his disappointment, tweeting, “The international community lost an important opportunity to show increased ambition on mitigation, adaptation & finance to tackle the climate crisis. But we must not give up, and I will not give up.” 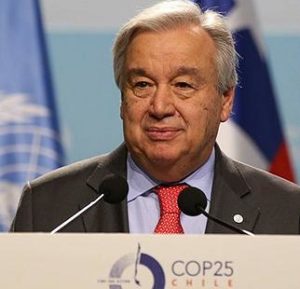 Guterres refused to see the conference as a defeat, tweeting that he is “more determined than ever to work for 2020 to be the year in which all countries commit to do what science tells us is necessary to reach carbon neutrality in 2050 and a no more than 1.5 degree temperature rise.”

COP25 saw progress made by the private sector, and by national, regional and local governments, but there was widespread disappointment that no overall consensus was reached on increased climate ambition.

By Friday, when the conference had been scheduled to end, negotiators had reached agreement on some important issues – capacity building, a gender program, and technology.

But an overall deal was held up over disagreement on larger and more contentious issues dealing with loss and damage caused by human-induced climate change, as well as financing for adaptation.

Weary negotiators worked through Friday night, at the request of COP25 President Schmidt, but a draft version of the outcome text released on Saturday morning underwhelmed all parties to the negotiations, with representatives of NGOs and civil society describing it as unacceptable, and a betrayal of the commitments made under the 2015 Paris climate agreement.

On Saturday afternoon, COP organizers held a press conference to explain that the negotiators were still hard at work, aiming to “show the outside world that we can deliver, that multilateralism works.”

By Saturday evening, there was still no deal, prompting Swedish climate activist Greta Thunberg, 16, one of the high-profile speakers at the COP and at the Climate Action Summit at UN Headquarters in September, to declare, “It seems like COP25 in Madrid is falling apart right now. The science is clear, but the science is being ignored.”

The European Commission and German Environment Minister Svenja Schulze expressed frustration that the summit had not succeeded in taking climate action forward.

“It is disappointing that after years of hard work and especially during the last two weeks that we could not agree on Article 6,” the EU delegation said in a statement. “We think, however, that we came much closer to agreement than previously, and this is something that we can build on in our future deliberation,” the EU delegates said.

Even after the weak outcome of COP25, the African Development Bank urged the continent’s nations to stay the course on climate action. 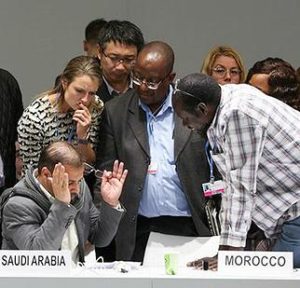 Africans were negotiating with the very real consequences of climate change already happening. Thousands of East Africans have been displaced in the wake of heavy rains that have battered the region since October, and more wet weather is expected from an Indian Ocean Dipole attributed to the warming of the ocean.

“The global community, and in particular Africa, has a lot to offer in terms of solutions. What is evidently lacking is the global political will to turn potential into wealth to serve humanity and the planet,” said Nyong, who led the bank’s delegation to COP25.

Nyong pointed out that Africa is committed; 51 of the 54 African countries have already ratified their Nationally Determined Contributions (NDCs) under the Paris Agreement. The NDCs are specific climate change targets that each country pledges to set.

Support for the bank-funded Desert to Power project highlighted Africa’s determination to strive for a climate-friendly world, especially for its local populations, said Nyong. Desert to Power is a $20 billion initiative to deploy solar energy solutions across the entire Sahel region, generating 10,000 MW to provide 250 million people with clean electricity.

“The African Development Bank stands ready as ever to assist its regional member countries to build resilience against climate change, as indicated by the Bank’s decision to join the Alliance for Hydromet Development, announced at COP 25 (https://bit.ly/35sye5S). The Alliance will assist developing countries to build resilience against the impact of natural disasters caused by extreme weather,” Nyong said.

Greenpeace International executive director, Jennifer Morgan, expressed the reaction of many NGOs, saying, “Governments need to completely rethink how they do this, because the outcome of this COP is totally unacceptable.” 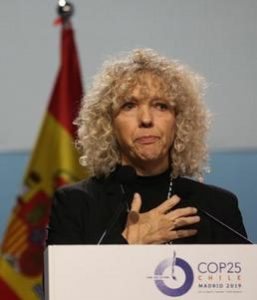 “COP25 was billed as being technical, but it became about more than the negotiations,” said Morgan. “This COP exposed the role of polluters in politics and the youth’s deep distrust of government. We needed a decision that responded to the youth, had science as its guiding light, recognized the urgency and declared a climate emergency. Instead, climate blockers like Brazil and Saudi Arabia, enabled by an irresponsibly weak Chilean leadership, peddled carbon deals and steamrolled scientists and civil society,” Morgan said.

Despite disappointment at the contents of the COP25 outcome document, several announcements made during the two-week conference indicate progress.

The European Union committed to carbon neutrality by 2050, and 73 nations announced that they will submit enhanced climate action plans for 2020.

A groundswell of ambition for a cleaner economy was also evident at regional and local levels, with 14 regions, 398 cities, 786 businesses and 16 investors working towards achieving net-zero carbon dioxide emissions by 2050.

The UN Global Compact, which works with the private sector, announced that 177 companies have now agreed to set science-based climate targets that align with limiting global temperature rise to 1.5°C above pre-industrial levels and reaching net-zero emissions by no later than 2050.

That is double the number of companies that signed up to the pledge at the Climate Action Summit, representing private sector emissions equivalent to the annual total CO2 emissions of France.

The Adaptation Fund convened a dialogue of contributing governments and others interested in pledging to the Fund during COP 25 and succeeded in mobilizing a total of about US$89 million from 11 different national and regional governments.

These followed recent announcements at the Climate Action Summit in October of contributions from Sweden (US$53 million over 2019-2022, of which US$13.5 million will be applied to 2019), first-time contributor the Government of the Canadian Province of Quebec (US$2.2 million) and Spain (US$2.2 million).

Sweden’s four-year pledge marked the first multi-year commitment to the Fund. Poland’s first-time contribution represented the 21st government to contribute to the Fund, marking a growing range of contributors.

Several governments, such as Switzerland, Norway and Spain, had not contributed to the Adaptation Fund for several years, so it signalled strong momentum for the fund since it began serving the Paris Agreement last January by providing concrete, effective and scalable adaptation work on the ground to the most vulnerable countries.

Although the amount of resources mobilized nearly meets the Adaptation Fund Board’s target of US$90 million for the year, increased climate ambition will need to occur to keep pace with the record demand for projects the fund has faced over the last several years due to the rising urgency of climate change.

This year alone, the Fund’s Board approved US$188 million in new projects, and the Fund has an active pipeline of another US$248 million in projects under development. In March 2019, the Board received a record US$268 million in funding requests across 40 new proposals.

On December 12 in Madrid, Heads of UN agencies met for a high-level Leadership Dialogue on how to turn the tide on deforestation and committed to the common goal of helping countries reduce deforestation and improve forest management.

According to the UN, up to 23 percent of all greenhouse gas emissions derive from the agriculture, forestry and other land use sector. 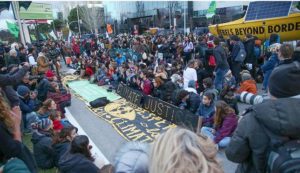 As the negotiations continue behind closed doors inside the COP25 venue, members of the nonprofit climate action groups Extinction Rebellion and FridaysForFuture blocked the roads leading to the venue, staging a large protest, calling the meeting “another lost opportunity.” December 11, 2019 (Photo courtesy Earth Negotiations Bulletin)

Still, forest-based solutions taking place on the ground show the real and promising results that forests can deliver.

As President of COP25, Chile initiated the “Santiago Call for Action on Forests.” click here to find out more about the action.

The COP25 Presidency issued the call for action on seven essential activities, such as reducing emissions from deforestation and forest degradation and enhancing sinks, such as forests, that absorb carbon.

Together with improved land management options, forests and trees could provide up to 30 percent of greenhouse gas mitigation required by 2030 to keep the increase in global average temperature below 2 degrees Celsius, the upper temperature goal of the Paris Agreement.

Inger Andersen, executive director of the United Nations Environment Programme (UNEP) agreed with the urgent need for action, and highlighted several areas for the implementation of solutions.

“We need to focus on nature-positive agriculture; clean up our supply-chains; adopt sustainable consumption and production methods; partner with the private sector and put a price on carbon,” said Andersen. “And the good news is that there is much greater awareness about the state of our forests than ever before and when we build leadership in one place, we will witness a race to the top to save our planet’s forests.”

Scottish bagpipes were heard in Madrid on Friday, a prelude to next year’s climate conference, which will be held in Glasgow, Scotland. COP26, scheduled for December 2020, just before the Paris Agreement takes effect at the end of that year, is being recognized as an important milestone in the fight against climate change, because countries will be expected to present upgraded national climate plans that go beyond the commitments they have already made.