BONN, Germany, November 13, 2018 (Maximpact.com News) – From a mobile app that fights food waste and hunger to a government that is taking 100 percent responsibility for its greenhouse gas emissions, 15 projects from around the world are demonstrating how fresh ideas, large and small, can change the course of climate change.

“These activities shine a light on scalable climate action around the world,” said Patricia Espinosa of Brazil, executive secretary of UN Climate Change . “They are proof that climate action isn’t only possible, it’s innovative, it’s exciting and it makes a difference.”

Human activities, such as burning fossil fuels, have triggered a change in the Earth’s climate system that could leave the planet uninhabitable before the end of this century, warns the latest scientific evaluation from hundreds of scientists with the Intergovernmental Panel on Climate Change.

And only human activities that protect the climate can reverse that calamitous course.

“Climate action leaders, including those recognized by the Momentum for Change initiative, are stepping up to meet the global climate challenge by delivering on the Paris Agreement,” said UN Secretary-General António Guterres.

“These inspirational leaders, from communities, governments, businesses and organizations, come from all corners of the globe and all levels of society,” Guterres said. “Their winning projects range from transformative financial investments to women-led solutions to protect people and the planet.”

“Through their leadership and creativity, we see essential change,” said the UN chief.

The Momentum for Change initiative, advanced by the UN Climate Change secretariat, illuminates some of the most practical examples of what people are doing to combat climate change.

“There is an enormous groundswell of activities underway across the globe that are moving the world toward a highly resilient, low-carbon future. Momentum for Change recognizes innovative and transformative solutions that address both climate change and wider economic, social and environmental challenges,” UN Climate Change said in a statement.

The 2018 Lighthouse Activities were selected by an international advisory panel as part of the secretariat’s Momentum for Change initiative, which is implemented with the support of The Rockefeller Foundation, and operates in partnership with the World Economic Forum, Masdar’s Women in Sustainability, Environment and Renewable Energy Forum (WiSER) initiative, and Climate Neutral Now.

The 15 projects were chosen from more than 560 applications from businesses and governments, communities and nongovernmental organizations throughout the world.

Each of the 15 winning projects, called Lighthouse Activities, falls within one of Momentum for Change’s four focus areas: Planetary Health, Climate Neutral Now, Women for Results and Financing for Climate Friendly Investment.

They will be showcased in a series of special events during this year’s UN Climate Change Conference (COP24) taking place December 2-14 in Katowice, Poland.

The 2018 Momentum for Change Lighthouse Activities are: 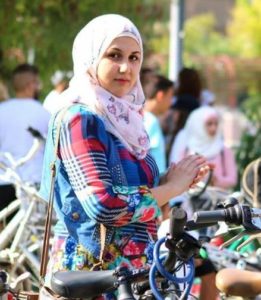 Between 33-50 percent of all food produced globally is never eaten, and the value of this wasted food is worth over US$1 trillion annually.

OLIO points out that it takes a land mass larger than China to grow the food each year that is never eaten – land deforested, species driven to extinction, indigenous populations moved, soil degraded – all to produce food that we throw away. Food that is never eaten accounts for 25 percent of all fresh water consumption globally. Meanwhile 800 million people go to bed hungry every night.

“Today,” says HelpUsGreen, “orthodox temples and religious authorities want to be a part of our mission -pointing to a change against a century old harmful religious practice of dumping temple-waste in the Indian rivers.”

In 2012, EarthSpark turned on a first-of-its-kind privately operated, pre-pay microgrid in Les Anglais, Haiti, a small town that had never before had grid electricity. EarthSpark aims to build 80 microgrids in Haiti by the end of 2022.

The fund invests in the best public and private projects that have the potential for transformative change and that align with Rwanda’s commitment to building a strong green economy.

Projects announced to date by Bank of America under the Catalytic Finance Initiative include new energy efficiency financing in partnership with the New York State Green Bank totaling $800 million, arranging a $204 million green project bond for wind developer Energia Eolica S.A. in Peru, and helping to structure a new $100 million facility with the Global Alliance for Clean Cookstoves.

“A central way in which we are helping to build sustainable economies is through our financing of clean energy,” said Anne Finucane, vice chairman, Bank of America. “The Catalytic Finance Initiative demonstrates how all partners working together will achieve a greater collective impact.”

The UN’s Momentum for Change initiative is part of a broader effort to mobilize action and ambition as national governments work toward implementing the Paris Climate Change Agreement and the Sustainable Development Goals.